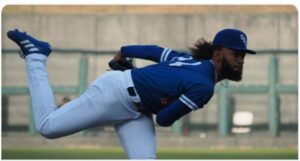 After shutting out the Express on Memorial Day, the tables were turned today. Andre Jackson started for the Dodgers and completed 6.0 innings, matching a career high. Jackson had not pitched more than 4.0 innings in any of his 8 starts this year. Last night, Jackson allowed only one run on five hits and three walks. He also had two strikeouts and had the Express hit into 12 groundouts. He only threw 76 pitches and in 4 of his 6 innings he threw 10 or fewer pitches. The lone run allowed was a 6th inning homerun by old friend Willie Calhoun. All in all though, it was a very nice outing for Jackson. Despite that, he still took the loss. Mark Washington followed Jackson and pitched a perfect inning with 2 strikeouts. He was followed by

Phil Bickford who in his first appearance with OKC since being demoted allowed a 3-run homerun to Willie Calhoun. In his inning of work, Bickford allowed 2 hits and one walk.  Apparently, he wasn’t pleased with the demotion. The winning pitcher for the Express was another old friend, Josh Sborz.

At the plate, OKC had six hits, highlighted by a double from Drew Avans. The Express pitchers struck out 12 Dodger hitters. Pretty much a forgettable night for the offence.

My vote for player of the game goes to Andre Jackson.

Tulsa Drillers lost to the San Antonio Missions 5-4 in 11 innings.

Clayton Beeter started for the Drillers and for the exception of allowing 3 solo homeruns in the bottom of the third he did all right. Beeter must have thought to himself: “Hey, if Buehler and Urias can do it, so can I.” His final line was 3.1 innings, 6 hits, 3 earned runs and 6 Ks. He threw 63 pitches, 45 of which were strikes. His downfall was the third inning, when Conner Kaiser homered on the first pitch of the inning, the next batter, Esteury Ruiz hit his homerun on the 3rd pitch. The third batter flied out, and then Domingo Leyba followed with another solo homer. Beeter would retire the next two hitters on a pop out and fly out. Beeter was followed by Jose Adames who allowed a run in his 1.0 inning. He did register one strikeout. Alex Gamboa followed and was unscored upon in his 2.2 innings, but he did allow an inherited runner to score. Jordan Leasure followed with a scoreless inning, as did Aaron Ochsenbein who also struck out 2. Gus Varland came on in the 10th and other than an intentional walk, pitched a scoreless inning. Jose Hernandez was asked to keep the game scoreless, but allowed a single on the first pitch thrown, which plated the ghost runner.

Offensively, the Drillers had 10 hits, with Andy Pages, Leonel Valera and James Outman getting two each. Pages hit his 6th homerun of the year; a two-run shot that tied the game in the 8th inning. The Drillers load the bases in each of the last three innings but were unable to score.

Player of the game honors goes to Andy Pages. Landon Knack will start for the Drillers tonight.

Andy Pages pounds one deep into the night.

The No. 4 @Dodgers prospect kicks off June with a resounding homer for the @TulsaDrillers: pic.twitter.com/Gj97hx7nW4

This was the game of the day for the Dodger minor leaguers.

Kendall Williams started for the Loons and had one of his best outings of the year. Williams pitched 6 innings, allowing but one run on 3 hits and 2 walks. He also struck out 3. He cruised through the 6 innings on 77 pitches, 50 of them for strikes. He was followed on the mound by Braydon Fisher, who pitched a very efficient 2 scoreless innings, striking out 3 around a walk and an HBP. He didn’t give up any hits.   Used mostly in relief, Fisher is wanting to remind folks that he is still pretty good. Next up was Ryan Sublette, who pitched a scoreless, hitless inning, striking out 1 for the save.

Offensively, Jorbit Vivas hit a 2-run home run in the third inning and Imanol Vargas hit a solo home run in the 4th. Diego Cartaya made his first appearance after being promoted to High A. He started well, going 1-2, with 2 walks. Vivas and Vargas both had 2 hits on the night.

My player of the game award goes to Kendall Williams. Tonight, Ben Casparius makes his High A debut for the Loons.

Kendall Williams was 91-93 on the fastball and had the split-finger really tumbling tonight for Great Lakes. @kwilliams2019 went 6.0, which is his longest outing of the year, and gave up just 1 earned while striking out 3. Take a look at his split-finger for yourself. #dodgers pic.twitter.com/OzZLI9mndC

This was the low light for the 4 minor league clubs.

Ronan Kopp made his first start for the Quakes and it was one he would easily want to forget, as he gave up 2 runs on 2 hits and 2 walks. He did strike out the side, so there’s that. Jhan Zambrano followed, and it wasn’t pretty. Zambrano allowed 7 runs, 5 hits, one walk and hit 3 batters in his 2.1 innings. One of the hits allowed was a grand slam. He was relieved by Joan Valdez, who was the only pitcher that had any success and against the Storm. He pitched 1.2 innings, allowing only a walk, and striking out 4. Then came Martin Santana, who in 1.2 innings walked 4 and allowed a run. On the plus side he struck out 2 and didn’t give up a hit. The last pitcher of the night was 19-year-old, Roque Gutierrez. In his 2.1 innings Gutierrez surrendered 2 hits one of which was a 2-run home run to Albert Fabian, who had 2 home runs on the night.

Offensively, the Quakes had 2 hitters with 2 hits a piece; Jake Vogel and Kenneth Betancourt. Beyond that, the hitters were 1-12 with runners in scoring position, and the K’d 10 times.  As the big club will tell you, that’s not going to get the job done, even if you’re playing a team as lowly as the Pirates.

I’m giving the player of the game award to Joan Valdez, with a solid pitching performance. Dodger 2021 third round pick, Peter Heubeck makes his debut for the Quakes tonight.

Joan Valdez relieves Jhan Zambrano in the top of the 4th pic.twitter.com/foOmhujj13

I know most fans are high on for Maddux Bruns, but I have always believed that Peter Heubeck could be a sleeper and a steal. I am very much looking forward to watching Heubeck tonight. I should be able to get a couple of innings in before the LAD game comes on.

Another guy we both follow, Jeff. I’ve been on Heubeck since I saw video of him on draft day. Let’s see how he does so we can both claim credit…………….or deny we ever said anything.

Is Bruns officially hurt? I thought I read somewhere that he was having a problem with his shoulder last time out. Not something you want to hear about a top prospect.

I beleive he was pulled in his last start. He is on the IL. But I have not heard what might be ailing him. Getting information out of the Dodgers is not always easy. Although we did hear very quickly on Pillar.