What To Make of Kody Hoese 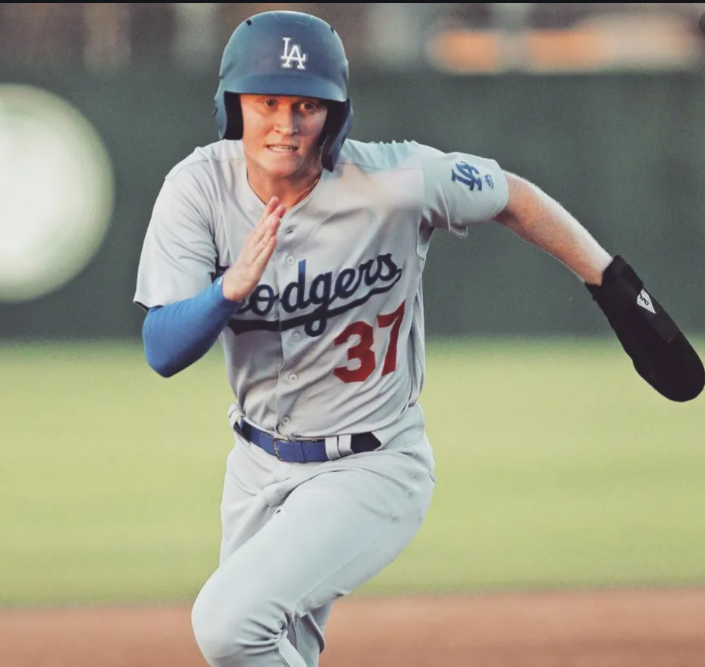 What to make of Kody Hoese?  He has been labeled as a slow bat by many scouts and prospect analysts.  While others say he has the ability to make a ML roster with his bat speed.  How is that possible?  Different scouts see swings differently.  It is also just as possible that Hoese is extremely inconsistent with his swing and bat speed.

One publication that has removed Hoese as a prospect in 2022 is FanGraphs.  This is what they wrote in 2021 when he was considered LAD’s #10 prospect.

Every year, a college player who was draft-eligible the year before takes a sudden leap, performs at an elite level, and forces teams to consider whether there’s been a real uptick in his skill or if he’s just beating up on familiar competition, in essence repeating a level. Hoese was the 2019 case. After putting up an .803 OPS in his draft-eligible sophomore year (he went in the 35th round and didn’t sign), he put up a 1.276 OPS in his junior year, with 23 homers and a 38:30 BB/K ratio.

He’s not tooled up and doesn’t have huge raw power, even with a healthy wrist. Instead he’s a very athletic swinger with a quick bat, whose swing is geared for airborne contact. That should help him get to power in games even though there’s not huge raw. Hoese will need to attain a balanced hit/power combination to profile at third base.

Kody did not make the FanGraphs 2022 Top 51 prospect list for 2022.  So in the eyes of FanGraphs Hoese went from a Future Value of 45 to 30.  He wasn’t even an honorable mention.  I know that the list was prepared in the offseason, but in all candor, I do not understand leaving him off.

Hoese is a divisive player who draws widely disparate opinions depending on when scouts saw him. At his best, he is a balanced hitter with a short, compact swing and drives balls to all fields with his natural strength and leverage. Other times he jumps out of his legs, gets around the ball with a long swing and his bat speed disappears. Hoese shows above-average hitting ability and power when his swing is right, but the latter swing shows up too frequently. Hoese is a below-average runner who gets what’s hit to him at third base but lacks range. His arm strength fluctuates from below-average to above-average due to his inconsistent arm slot.

Hoese displayed a nice right-handed swing and the ability to use the leverage in his 6-foot-4 frame during his first two college seasons, and he began to realize his power potential once he added strength. He drives the ball from gap to gap and employs a disciplined approach. While his power is his most attractive tool, he should hit for average as well.

Though he’s a below-average runner, Hoese moves well for his size. He has solid arm strength and enough range to remain at third base, though he needs to improve his consistency on defense. If he had to move to first base, he should provide enough offense to profile as a regular there as well.

When he’s going good, Hoese displays an athletic right-handed swing and a disciplined approach while driving balls from gap to gap. But for much of 2021, his stroke looked longer and slower and he got too aggressive at the plate, which the Dodgers attribute to his injury and trying to dig himself out of a hole during a challenging assignment to Double-A. He continued to struggle in the Arizona Fall League, but he made some swing adjustments during the offseason that the club hopes can unlock a solid hitter with similar power.

Though he moves well for a large man, Hoese is still a below-average runner and a fringy defender at third base. He has decent range and hands, while his arm strength fluctuates from fringy to solid. He’ll need more consistency on both sides of the ball to profile as a big league regular.

Even Keith Law who rated the Dodger organization as the best in MLB wrote this about Kody Hoese:

Kody Hoese was a reach in the first round in 2019, a fourth-year junior who hit 23 homers for Tulane mostly off pitchers younger than he was. He hit .188/.241/.245 in 59 games for Double-A Tulsa last year, then was one of the few guys in the Arizona Fall League who didn’t hit, all while playing well below-average defense at third.

The scouting reports are all over the map with Hoese.  I think Baseball America said it best in their first sentence: “Hoese is a divisive player who draws widely disparate opinions depending on when scouts saw him.”

While I am not a trained scout, I was in the camp that believed his bat speed was not quite good enough to play 3B at the ML level.  When drafted, I believed Michael Busch was the better choice.  I still do. I know, thank you Captain Obvious.

There is no question that Hoese was not good at all in 2021.  Was it the intercostal injury?  Or was the pitching simply better than Kody?  The Dodgers say it was the former, while many scouts say it was the latter.

It is evident that Hoese is a free swinger with 5 walks in 144 PA (3.5%).  Thus his OBP is going to primarily approximate his batting average. With the limited power in his thus far pro-career, his OPS is not going to be sufficient to play one of the corner infield positions at the ML level as a regular, and he is not nearly quick enough to play up the middle.

If Hoese was a plus plus defender at 3B, one might accept his seemingly limited power.  But he is a fringy at best defender.  His 2022 OPS of .741 is considered average for ML hitters, not AA hitters.

Kody turns 25 in July.  He is considered 3 months younger than the average Texas League player. Thus, age is going to be a consideration as he progresses.  But more importantly, Hoese is blocked from further progress by Miguel Vargas.  Vargas is nearly 2.5 years younger than Hoese, and is hitting better at AAA.

We just learned on Tuesday that Kody went on to the 7-Day IL.  So we are in a holding pattern for now.  I hope Kody can return to where he left off before the injury.  At the very least he is emerging as a plausible trade package target come the trade deadline.

I don’t know what to make of this guy, but I don’t expect much at this point.

It would appear we have some inflating ERA’s on this club. I felt it coming, took some heat for saying so. Is it just a glitch, or is it a growing concern. I might get an answer vin the coming days.

Jeff, you left out Lux’ thoughts on Hoese. Lux said Kody can really hit. Kody could be the one that got away if he were traded.

Might Fergussen be the closer before july is over?

I would rather Lux concentrate on hitting himself. Not knowing if you are serious about Hoese potentially being the one that got away. Where is he going to play? Edwin Rios is a better choice already with the Dodgers, and Miguel Vargas will be ready next year.

Caleb Ferguson could end up closing by the end of July, but Daniel Hudson has closing experience, so I think he would get first crack at it. I would also not look past Yency Almonte. Treinen should be back after the All Star Break, so he could also close. I still do not think Graterol has enough swing and miss to be a closer. But if he gets that slider down more consistently, that could change.

Yency Almonte for me has been a very pleasant surprise.

Hoese could wind up like Turner, Taylor, and Muncy and bloom late. I won’t hold my breath.

June 1: OF Kevin Pillar exits with left shoulder injury
Pillar left Wednesday’s game in the sixth inning after his left shoulder “came out and then came back in” on a swing and later on a slide, according to manager Dave Roberts. The outfielder previously dislocated that shoulder making a diving catch in 2018. He’s currently day to day, though he will be unavailable on Thursday as he undergoes scans on the shoulder, and an injured list stint is a possibility.

Maybe we’ll be ok, but at times this team looks and plays pedestrian. Our base running and defense on occasion looks like a Pony League team. We’ll get healthy against the Mets gulp.

Right now, this team is playing extremely poor fundamental baseball. They could learn a lot from watching film from the Pirate series. Not only how to NOT play the game (LAD), but how TO play the game (Pitt). Not that Pittsburgh was perfect, but they sure looked a lot better than the Dodgers.

The Dodgers could not hit power RHP starters (Thompson or Keller) or soft tossing LHP starter (Quintana). Some contender in the NL is going to trade for Quintana to go against the Dodgers in the playoffs. Pittsburgh is lining up for the calls from San Diego, San Francisco, Milwaukee, St. Louis, NYM (or Atlanta/Philadelphia if they climb back in it).

The plate umpiring was also abysmal. Those strike calls to Trea Turner were outrageous.

Philadelphia showed it in their first series with LAD and Pittsburgh took it to the next level. Teams are going to feast on that 4-seamer. I am not sure what is going on with the team’s 4-seamer, but the two best going into the Pittsburgh series were Urias and Vesia. Pirate hitters did not miss either of them.

Dodger pitchers come out throwing the 4-seamer to get strikes. But in the last five games the opposition has scored 10 runs in the first two innings. The the starter settles down, and the relievers come in and try to establish the 4-seamer, and get hit again.

Oh well, just need to vent. The Dodgers are absolutely the class of the NL, but going through a tough time right now. Hopefully they will rise to the challenge of the Mets and to re-establish themselves as the team to beat in the NL. If not, they are still going to make the playoffs.

I agree the Dodgers are the class of the NL, when they are hitting on all cylinders. When they play like they have in those few series they lost, they look vulnerable. What concerns me most is will they all be there peaking in September and October.

I’m hoping these lapses are early season concentration gaffs. They know they are good and will get around to it when it really counts. We play like this and we still lead the West by 3 games and are second only to the Mets and Yankees in win percentage.

That said, I still believe we are not a good defensive club and thus far I have an uneasy feeling about starting pitching. I hope I’m wrong.