Outfielder Drew Avans of the OKC Dodgers was born in Alabaster, Alabama and attended Thompson High School in his home town of Alabaster.

Following high school he attended Southeastern Louisiana University for four years. In his senior year he hit a career-high .330 with 10 home runs and 44 RBI, playing strictly in the outfield for the first time. He led the Southland Conference in walks (44) and stolen bases (23), earning first team All-Conference honors. Avans ranked third in both slugging (.568) and on-base percentage (.462), and fourth in runs scored (52).

He was selected by the Dodgers in the 33rd round of the 2018 First-Year Player Draft .That is the same round in which Zach McKinstry was selected during the 2016 draft.

Avans moved step-by-step through the Dodger system with success at the plate except for his stop with the Great Lakes Loons.

In a spring training game on March 29, 2022 Avans had a moment he will enjoy forever. He hit a grand slam home run off former Dodger Grant Holmes.

Need Some Relief – Who You Gonna Call?

How about calling Jordan Leasure of the Tulsa Drillers?

Leasure is one of only three 2021 Dodger draftees who have made it to AA Tulsa in 2022. The other two are left-handed pitcher Lael Lockhart and right-hander Nick Nastrini who was just promoted to the Drillers.

Jordan Leasure was selected in the  14th round of 2021 draft out of the University of Tampa. He was born in Riverview Florida and attended Riverview High School prior to his four years with the Tampa Spartans.

He signed with the Dodgers with a $125,000 signing bonus and perhaps it was his senior year at Tampa that helped seal the deal.  As a senior, in 17 relief appearances with eight saves, he posted an ERA of 0.94 and a 0.60 WHIP along with 60 strikeouts and four walks.

“Leasure features a fastball that is touching 97, a tight slider, and a change-up that he is working on and looking to throw more in games. Like most power pitchers, he likes to ride the 4 seam fastball up in the zone, but he also gets good carry to his fastball down in the zone too. “

“Leasure features a good, tight slider that is 8-10 mph off of his fastball, and it tunnels well off the fastball as well, so it is a very effective secondary pitch for him.”

“The change-up is a very feel-heavy pitch and one that he has been working very hard on in the bullpen to get the feel for and trust.”

Nick Nastrini who was selected by the Dodgers in the fourth round of the 2021 First-Year–Player Draft out of UCLA was named the Midwest League Pitcher of the Week for the week of August 8 -14 . 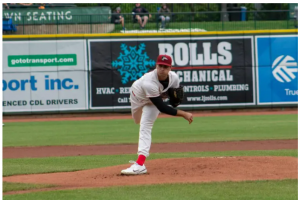 The 6’3”/215 lb. right-hander shut out the Peoria Cardinals on Thursday, August 11  and did not allow a hit until the fifth inning when two singles put runners on first and second with one out. Nastrini struck out the next hitter and got out of the inning with a fly out. He finished with nine strikeouts to go with the two hits and two walks. His dominant performance earned him the Pitcher of the Week award.

His dominant start on August 12 should not have come as  a surprise as in his last four starts he has gone six  innings on each appearance  posting an ERA of 2.63 and a WHIP of 0.83. He struck out 28 over 24 innings and walked seven.

On Monday, August 15, Nastrini was promoted to the AA Tulsa Drillers.

Infielder Rayne Doncon was signed by the Dodgers out of San  Pedro  de Macoris in January of 2021. He might be considered one of the “sleeper” or “steal” prospects. For the week of August 8-14 he was named the Arizona Complex League Player of the Week. 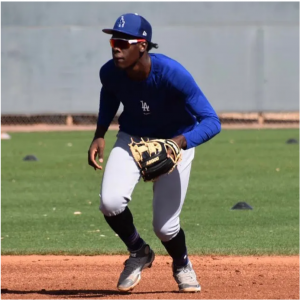 MLB Pipeline and Baseball America has this to say about Doncon.

“One of the most advanced young bats in the system, Doncon could be a plus hitter with 20 or more homers per season if he reaches his ceiling. He repeats his simple right-handed swing with ease, has a knack for barreling balls and possesses plenty of bat speed and projectable strength. Doncon already shows the ability to drive balls in the air, though he can get overly pull-conscious.” – MLB Pipeline

“He has fast bat speed, excellent natural timing in the batter’s box and consistently barrels fastballs. He has a flat swing plane that results in a lot of low line drives, but he has a chance to grow into average or better power as he gets stronger and fills out physically.” Baseball America

During the past seven days the shortstop/second baseman had perhaps the best week of any player in the Dodgers MiLB system.

Drew Avans saw his 50-game on-base streak end after two plate appearances, going 0-for-2 with a strikeout and a groundout. Avans left the game in the bottom of the fourth inning with injury after running into the center field wall while attempting to make a catch.

He has posted his updated Top 30 list for each team. Dalton Rushing has already made it to No. 9.

Yes he is. I would like to see what he can do at Great Lakes some time during the last 23 games

Who among the first 3 featured might have a legit ETA of 2023?

Roncon looks like a player to be watched. Does he project as a SS?

This from Doncon’s Prospect Ranking Report.

While the Dodgers believe Doncon has the actions and solid arm strength to possibly remain at shortstop, he’s an average runner who might lose some quickness as he matures physically. He’s still learning to play under control in the field and likely will wind up at second or third base, with more than enough offense to profile at either spot. Club officials praise his makeup as well.

This on Wilman Diaz which might influence the position for Doncon.

Diaz has plus speed that presently translates more into range at shortstop than stolen bases. He’s a gifted defender at short with smooth actions and plenty of range and arm strength. He’ll need time to develop but still has one of the higher ceilings among Los Angeles’ position prospects.

Among the top three I expect Cartaya to be the last to arrive at the MLB level. I doubt it will be in 2023 unless with another team or unless late in the season.

Both Vargas and Miller should have a 2023 ETA, Vargas first. That is just my opinion. I am not in a hurry to push Miller or Gavin Stone to MLB. Their time at AAA this year should provide an indication of exactly where they stand. They are both in their second year of professional baseball so arriving this year would be quite a feat.

I respect your knowledge of our system. I want to see our best young arms come in and help get our 4 best starters to the playoffs well rested. First of all, do you agree? If so, and it were up to you, how would you go about doing it?

My knowledge of the system is much less than you expect Badger. My knowledge is more on the personal side of the MiLB players and not really geared to whom will help the parent club the most.

That being said, I do agree that the Dodgers need to get to the playoffs with as rested a pitching staff as possible.

Fortunately the team does have a good lead but the 1951 Dodgers remind us that a 13-game lead can evaporate very quickly.

I don’t know what I would do. I do note that Andre Jackson at last has three good consecutive starts at OKC.

Dustin May and Ryan Pepiot have to help take some of the pressure off. We don’t know what Clayton’s status will be in three weeks time. Perhaps we go to RP games as last year with David Price starting. He has had a very good August albeit in short outings.

As others have mentioned, perhaps we can go to a six-man rotation with Urias, Heaney, Anderson, Gonsolin, Pepiot and May.

Using Miller, and especially Stone, would be a last minute desperation move by me.

Certainly dealing with the 40-man roster is a challenge not made easier by using Miller or Stone.

Jackson stats don’t impress me. He hasn’t pitched much, according to what I read 3 starts, 14 innings since July 27th.

I don’t know. Maybe my crystal ball is getting clouded.

A’s released Elvis Andrus. Elvis has left the building! Braves signed Michael Harris III to an 8 year extension. Braves also gave themselves the kiss of death. They traded for Tyler White. Guaranteed to jinx your club and provide nothing.

Nastrini and Doncon are two that I have been hyping all year. It is great to see Doncon start to produce with the bat. Nastrini is going to need more time, but I believe he is going to get to the ML, maybe a late 2023 callup or 2024.

I inadvertently missed a portion of Harold’s post when I transferred it to the site. This is the biographical data on Drew Avans that Harold included. I have already updated the actual post, but for those that have already read the post, here is the bio information.

Outfielder Drew Avans of the OKC Dodgers was born in Alabaster, Alabama and attended Thompson High School in his home town of Alabaster.

Following high school he attended Southeastern Louisiana University for four years. In his senior year he hit a career-high .330 with 10 home runs and 44 RBI, playing strictly in the outfield for the first time. He led the Southland Conference in walks (44) and stolen bases (23), earning first team All-Conference honors. Avans ranked third in both slugging (.568) and on-base percentage (.462), and fourth in runs scored (52).

He was selected by the Dodgers in the 33rd round of the 2018 First-Year Player Draft .That is the same round in which Zach McKinstry was selected during the 2016 draft.

Avans moved step-by-step through the Dodger system with success at the plate except for his stop with the Great Lakes Loons.

In a spring training game on March 29, 2022 Avans had a moment he will enjoy forever. He hit a grand slam home run off former Dodger Grant Holmes.

I included some bio on Drew Avans as some readers might not be familiar with him as he has not been on prospect lists.

He is on the 7-day IL now having run into the outfield wall last night.

Ok, Avans. Where is he on the depth chart?

He most likely will wind up with another franchise but as a 33rd round selection he has a chance to wear a MLB uniform. That is impressive.

He just had a 50-game on base streak which no other Dodger MiLB or MLB has done. That is very impressive.

Forgive me but I am interested in the minor leagues only in how it is they will help win ML games, now AND next year. I’m be here now when it comes to a roster that will advance in the playoffs. If this guy is MLB worthy, and we aren’t going to use him, let me know when he’s traded for someone we WILL use.

RHP Edgardo Henriquez, who left his last start with what appeared to be an elbow injury, was officially placed on the IL today.

I hope not, but I’m assuming we may be just a few days away from a TJ announcement.