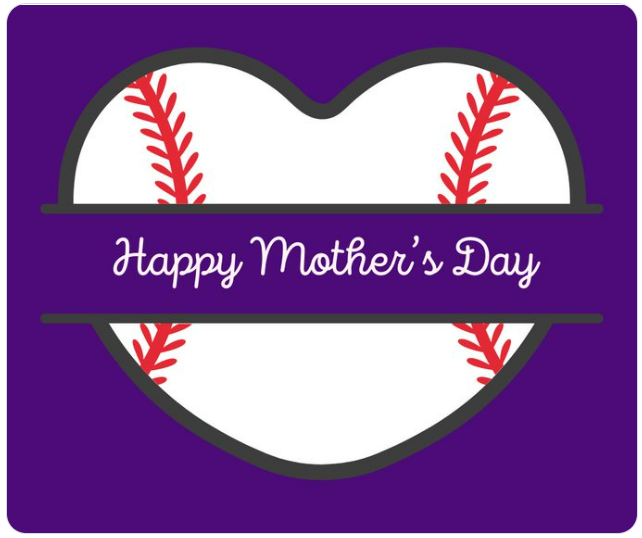 Happy Mother's Day to all of our incredible OKC Dodgers moms! We hope your day is filled with love, laughter and a lot of baseball! 💙 pic.twitter.com/8ptDNOISnG

The Dodgers have established a bit of a pattern by giving up double digit runs on Sundays.

Right-hander Yadier Alvarez was not able to strand the two Zamora runners he inherited in his 0.2 innings pitched.

Left-hander Caleb Ferguson making his fourth rehab appearance has not yet gotten back into the swing of things. No pun intended as he recorded two outs but gave up four runs on three hits, one of them a home run.

Right-hander Shane Green had the best pitching appearance for the Dodgers as he had all zeros in his 1.1 innings pitched except for three strikeouts.

Left-hander Garrett Cleavinger gave up an additional two runs in the ninth inning on three hits.

Miguel Vargas drove in two runs with a double in the third inning following a walk  to Omar Estevez and a single by Zach McKinstry.

Stefen Romero doubled the Dodgers score in the bottom of the sixth inning with  a two-run home run.

The Dodgers fifth and final run came in the seventh inning on a Jake Lamb double driving in Miguel Vargas who has now scored in ten straight games.

I am going with Miguel Vargas who had a hit, a run, two runs batted in and two walks. Vargas is heating up with a batting average of .367 over the last seven days.

His two-run double gives the Dodgers a 2-0 lead in the 3rd inning. pic.twitter.com/MNXhdt6ttZ

Top prospect right-hander Bobby Miller started for the Drillers and wound up with a line score of 4.2 innings pitched, three earned runs on three hits, three walks and with five strikeouts. He left in the of the fifth inning after having struck out two and walking two. Right-hander Jose Adames could not strand the two runners he inherited.

Left-hander Austin Drury escaped his one inning with only one run allowed while allowing three and two walks. He was aided by a double play.

Nick Robertson finished off the top of the seventh inning earning his first save of the year. The 6’6”/265 lb. Right-hander retired the Wind Surge on eight pitched, seven of them strikes.

Jacob Amaya started things off in the top of the first inning with  a triple on the second pitch he saw. He scored on a Michael Busch ground out.

Another single run came across in the sixth inning on Aaron Ward’s ninth home run of the season.

The fun really began in the top of the seventh inning. The Drillers hit for the cycle in the inning with a Hunter Feduccia home run, a Jeren Kendall double, a Jacob Amaya single and a James Outman triple.

Toss in a Michael Busch single and four runs scored.

Perhaps it should be players of the game. A coin was tossed and landed on its edge. Both Jacob Amaya and Michael Busch had two hits, scored two runs and a run batted in.

Well…@JacobAmaya3 is at it again. He just hit 7th home run of the year and now has a home run and 3 doubles in his last 3 games. Dude is incredible!#dodgers #jacobamaya pic.twitter.com/GN8umTyWmB

The Drillers had a nice Sunday afternoon sweeping a double header with the Wind Surge.

Tulsa sent four right-handers to the mound in the second game of the twin bill beginning with Michael Grove starting for the fifth time this season. He threw 72 pitches with only 39 of them strikes. However he limited Wichita to one run on four hits along with three walks. He struck out four.

Jordan Leasure followed Grove and gave up three earned runs on three hits, one a double and one a home run.

Melvin Jimenez pitched the sixth inning and surrendered a home run to the first batter he faced. He then settled down to retire the side.

Tanner Dodson claimed a save in the bottom of the seventh inning allowing just one single.

James Outman gave the Quakes an early lead with a three-run home run in the top of the third inning.

Jacob Amaya, hitting anything thrown his way, homered in the top of the fourth inning driving in two more.

A Michael Busch single finished the Drillers scoring in the sixth inning when his single drove in Brandon Lewis.

It can’t be given to Jacob Amaya every game, so it goes to James Outman for his three-run home run.

James Outman hit a 3 run homer for Tulsa, his 6th of the season, and it was a missile, 110 mph off the bat! pic.twitter.com/w6B8O4xxEY

James Outman, the No. 17 @Dodgers prospect, tripled in the opener and homered in the finale of the @TulsaDrillers' twin bill. pic.twitter.com/sdqLcjqXfm

The Loons entered Sunday’s game with Beloit looking to take five straight from the Sky Carp after having won five of six with West Michigan. This game would be the final regularly scheduled game of the season between Great Lakes and Beloit, and they came away with a 5-4 win.

The Loons are on a bit of a roll after a 2-7 start. They have gone 13-5 since then giving them the best won/loss record in the Midwest League during that time.

With one exception the pitching was quite good, and that exception was unusual.

Right-hander Kevin Malisheski was pressed into service to start and threw almost perfect innings. His lone base runner came on a walk, and he struck out five.

Right-hander Adam Scoggins came on in the fourth inning and was charged with three runs on two bunt singles, another infield hit, a walk and a wild pitch. That was an unusual inning with the ball not leaving the infield.

Right-hander Braydon Fisher replaced Scoggins to close out the inning and his 1.2 innings he walked one batter and struck out two.

Right-hander Carlos Alejo recorded two outs but left with two runners on. Cole Duensing replaced Alejo and the 6’4”/195 lb. right-hander stranded both runners but gave a home run to record a blown save.

Left-hander Julian Smith earned the win with a near perfect two innings to close the game. He allowed one hit and struck out two.

The Loons scored four runs in the bottom of the fourth inning on an RBI double by Joe Vranesh, a single by Jorbit Vivas, a force out by Eddys Leonard and a steal of home by Vivas.

The Loons went into the bottom of the eighth inning tied 4-4 but sealed a win when Ismael Alcantara doubled scoring Ryan January who had walked.

Alcantara had two doubles, but Kevin Malisheski gets the nod for his three near perfect innings when pressed into service to start the game.

Kevin Malisheski tossed 3.0 no hit innings in his first start of the season for Great Lakes, he had one baserunner (BB), and he struck out five⬇️ pic.twitter.com/LhqShDq5aH

On Sunday the Quakes were in hand-to-hand combat with the Storm for first place in the Northern Division of the California League trailing the Storm by one game going into the match-up.

Right-hander Ben Casparius started for the Quakes and tossed three innings of one run ball on one hit, one walk and with three strikeouts.

With an 8-1 lead Benony Robles came on and before his inning was over the score was 8-6, including two runners his replacement Christian Suarez couldn’t strand.

Right-hander Yamil Castillo was able to restore some order in the fifth and sixth innings with two perfect innings including three strikeouts. He gave up two hits in the seventh inning but no runs.

Ben Harris was brought in to pitch the eighth inning The left-hander did all he could to shorten the game. He struck out two, then induced a ground ball that resulted in an error and next had an easy fly ball drop for a double that scored a run. He then ended the inning with another looking strike out.

Right-hander Madison Jeffrey was called upon to close out the ninth inning and did so on 12 pitches, six of them strikes.

The Quakes came ready to play at Diamond Stadium in Lake Elsinore on Sunday. The first five batters reached base resulting in two runs, one on a double by hot hitting Damon Keith and a second on a single by Yunior Garcia. More runs were thwarted by a pick off and a double play.

The Quakes scored two more in the top of the third inning on a Diego Cartaya double driving home Yeiner Fernandez who had singled. Cartaya then scored on a Storm error.

By the end of their at bats in the top of the fourth inning the Quakes had built up an 8-1 lead. Two runs came in on a Kenneth Betancourt single and an additional two on an Alex De Jesus home run.

In the top of the sixth inning the Quakes restored a four-run lead by adding two runs pretty much at the expense of the Storm who made an error, walked two and hit a batter.

In the top of the eighth inning Jake Vogel and Luis Yanel Diaz singled giving every Quake batter at least one hit for the evening. One more run scored complements of two walks.

Shortstop Alex De Jesus claimed the award with his bat in a close competition with catcher Yeiner Fernandez. De Jesus had two hits, one a home run, three runs batted in and one walk.

Alex De Jesus hit a 2 run shot for Rancho Cucamonga, this is his 5th homer of the season pic.twitter.com/D0Dg7bSORy