One of the 2021 draftees that has intrigued me the most is 19-year-old left-hander Ronan Kopp. He was selected by the Dodgers out of South Mountain Community College in the 12th round of that draft.

He was born in Baldwin Park, California but played his high school baseball at Scottsdale Christian Academy in Scottsdale, Arizona.

There usually isn’t much to reflect upon with high school players other than the statistics they might have provided. However, in Ronan Kopp’s high school experience there is more to the story.

The now 6’7”/250-lb. Kopp attracted considerable attention as a high school player and not just for his size.

First, the statistical side of his high school story.

As a 16-year-old  Perfect Game ranked him  as the No. 1 class of 2020 left-handed pitching prospect in the state of Arizona .

He was selected by Gatorade as its 2018-19 Gatorade Arizona Baseball Player of the Year. As a junior  he compiled an 8-0 record on the mound, posting a 0.41 earned run average and 118 strikeouts in 51 innings pitched.

He could hit also even though  he had a tall strike zone. At the plate he posted  a .522 batting average and slugged six home runs—including two grand slams in one inning on April 4, 2019 —along with 11 doubles, 38 runs scored, 39 RBI and 29 steals.

Another statistic that is often overlooked is a young player’s GPA. He maintained a 3.31 GPA in the classroom. He also had made a verbal commitment to play baseball on a scholarship at Arizona State University beginning in the fall of 2020.

And another tidbit that is even more important has to do with a teenager’s character. Kopp had volunteered locally as part of multiple community service initiatives through his church youth group.

Now for the rest of his high school story.

As mentioned, Kopp attended Scottsdale Christian Academy where he had the privilege of being coached by former Angel Tim Salmon. It was easy for the young left-hander to warm to Salmon. Kopp grew up in Orange County, not far from Angel Stadium, where Salmon was a fixture in right field. Salmon retired in 2003. Kopp was an Angels fan and grew up watching Mike Trout star for the Angels.

It seems Salmon worked at keeping things as simple for his young protégé as he could. He helped  Kopp understand that he didn’t  have to throw the ball 100 mph to get people out. He just needed to be in control, know how to change things up and be smart about his pitches.

On Kopp’s part he took the advice to heart.

“Really it’s about how to approach the game,” Kopp said. “Obviously, you’re going to mess up. But work on it to minimize it and figure it out.”

When Kopp got his velocity up to 96 mph, Salmon was concerned about his control and rightfully so.

“The scouts saw that and were like, ‘Woah, you pitch one inning and walk five guys,’ ” Salmon said. “He’s a guy who can throw strikes at 90 and 91 but you project him at 96.  I said, ‘You’re back to playing baseball games. I need a pitcher that goes five, six, seven innings. You’re not here to throw one inning. You’re not here to blow up a guy. You’re here to pitch and let your seven, eight guys behind you to play defense.’ “

We all know the story of the 2020 high school baseball season. Kopp naturally was disappointed to lose his senior year at Scottsdale Christian Academy and his coach, Tim Salmon, feels that is one reason why he was not selected in the 2020 draft. Salmon was told by MLB scouts that they really wanted to see Kopp pitch in the spring  to ease any concerns of control with his fastball.

“He’s the kid that stands out head and shoulders above the rest,” Salmon said. “He looks like a kid that can play in the big leagues and he looks like Major League talent. I don’t get players like that a lot and to have one that stands out as much as he does is pretty impressive.”

Moving on to 2021, Ronan Kopp pitched for South Mountain Community College in Phoenix.  He made six starts and appeared in 10 games in 2021, posting one save with 38 strikeouts and a 2.84 ERA in 25.1 innings pitched. He walked 25.

Following his community college season in 2021 Kopp moved on the play with the Frederick Keys in the MLB Draft League.  He took a major step up in the competition he would face in the Draft League where high school and college players go to try to improve their draft prospects.

His stat line with Frederick Keys was rather impressive except for one entry. Over 24.2 innings pitched he posted a 1.46 ERA along with a 1.70 WHIP. He gave up only 12 hits resulting in an opponent’s batting average of .148. However, the one unsightly entry was 30 walks.

Still, this is a very positive young man. He came to the MLB Draft League to improve his draft prospects but more importantly to work on what he has to do literally get things under control.

While playing and working in the Draft League he was fortunate to get some tutelage from another coach with a pedigree. Former Dodger minor league pitching coach – Glenn Dishman – worked with Kopp helping him to respect the value of sabermetrics in improving his pitching.

After games he pitches in, Kopp said,

“I like to focus on my spin rate, and what speed I’m throwing my off speed pitches at. It’s definitely something that because I think it is the future of pitching with the analytics and saber metrics, I am doing my best to learn it at a young age.”

PDR Plus reported in its May 18, 2021 “Draft League Spotlight” that Kopp throws a 93-97 mph fastball, a sweeping slider, curve, and a cutter. Although his fast ball is his out pitch, he showed that  at Frederick he was not afraid to break off a curve or slider to strike a batter out.

Kopp’s size and left-handedness are the attributes that would get him drafted, along with a fastball that touches 97 mph and an inconsistent but potentially plus breaking ball, but his erratic performance will give teams pause before calling his name. Some observers believe he’s not yet ready to move on to the next level, either college or pro ball, and that he’d be best served by returning to South Mountain for another year.

Kopp has had the pressure of dealing with an unfriendly strike zone and being followed by a bevy baseball scouts. His Dad was asked how the younger Kopp deals with the pressures.

Kopp did sign with the Dodgers choosing not to attend Arizona State University. He began his professional career with the ACL Dodgers on August 25, 2021 pitching one inning against the ACL Rangers. He gave up one hit and struck out two.

He pitched one more inning in the ACL recording three strikeouts and one walk.

He moved on to the Rancho Cucamonga Quakes to start the current season. To date with the Quakes he has made five appearances over 8.1 innings pitched with an ERA of 1.08 and a WHIP of 1.20. Kopp has given up but one hit and one run with an opponent’s batting average against him at a minuscule 0.37. He has struck out 19 and his walk rate has continued at one per inning.

Ronan Kopp will turn 20 on July 29th so it is easy to forget that he will pitch most of the 2022 season as a 19-year-old. I’m sure Tim Salmon is keeping a close watch on Ronan’s progress as are we who follow MiLB so closely. 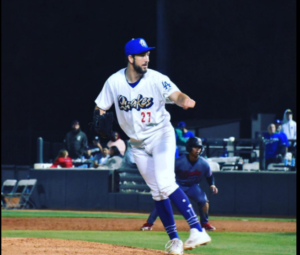