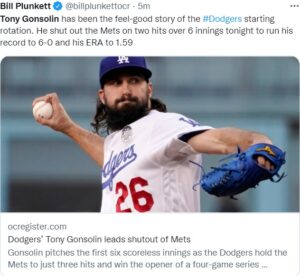 What a crazy game baseball is.  The Dodgers get swept by the Pirates as the Dodgers played some extremely sloppy baseball.  Tonight, the Dodgers went head to head against the team with the highest BA in MLB, winners of 6 straight, outscoring their opponents 49-17. The last two Mets victories were shutouts.  The Mets were red hot coming into LA.  And yet it was the Dodgers that outscored, outhit, outpitched, outrun, and out-defensed the NL East Division leaders.  For one game, the Dodgers again have the best record in the National League.

Once again it was Tony Gonsolin who came in and became the stopper for the Dodgers.  He still throws a lot of pitches, but if he keeps going 6.0 IP with zeroes in the run column, I am not sure you can ask for more.  Oh sure, why not ask for 7.0 or 8.0 IP shutout innings.  But that is not who The Catman is right now.  He still may get there, but for now he is a 6.0 IP.

Over his last four starts, Gonsolin has been extremely consistent.

I am not sure you can be more consistent.  His ERA over the last four games is 1.875 actually pushing his 2022 ERA up. That is how good Tony has been this year.  Everything was working for him.  His splitter was outstanding, but it was his 4-seamer command that helped to set up the batter.

That is four consecutive quality starts for Gonsolin, and now five for the season.  He has 51 IP for the season and will qualify for league lead for 1 game until LAD’s Game 52 on Friday.  Gonsolin’s 1.59 ERA would be third in ERA behind Texas’ Martín Pérez (1.42) and NYY’s Nestor Cortes (1.50).

He is now tied for the MLB in wins with 6.  He is 6-0, and Tyler Anderson has a chance to match Gonsolin for a 6-0 record on Friday.  I am running out of superlatives for Tony G.

As poor as the defense was for the three prior games, tonight’s D was terrific.  CT3’s diving catch on a Starling Marte line drive was a pretty of a catch as you will see this year.  It was ruled a trap and the Dodgers challenged.  They got one right.  It was funny to watch Marte go to the dugout before the call was reversed. He knew.

Cody Bellinger also made a fantastic play on a deep drive into LC off the bat of Eduardo Escobar, except he made it look easy.  Tony G knew what a great catch it was as he applauded the defensive gem.

The Dodgers faced a quality starting pitcher this year in Taijuan Walker.  He did not dominate, and the Dodgers were hitting him hard.  Except other than Mookie Betts’ leadoff single, the batted balls found NYM gloves.  After Mookie’s single, Walker held the Dodgers hitless until Gavin Lux grounded a hard hit ball up middle on another 2 strike pitch.  He now has 19 hits with 2 strikes.  He is batting .250 with 2 strikes. To put that into context, Mookie is 21 for 93 (.226) with 2 strikes, and Trea Turner is 23 for 98 (.231).  Gavin does not have the power this year, but he is becoming a good bat to ball #9 hitter in the lineup.  Lux also stole a base (as did Mookie).  Lux has a 12% BB rate and a 18% K rate. (19/29 in 162 AB).

The Dodgers got 8 hits, 2 BBs, and reached base on 1 error on the night.  Thus they had their chances, but on a negative note the team was 2 for 14 WRISP.  A hit or 2 in those situations, changes the makeup of this game.  Mookie, CT3, and Gavin Lux each had 2 hits on the night.  One of the key hits was a JT double to score Trea Turner.  It was properly better defined as a misplay by Marte, but it was a double nonetheless.  It is about time some of those breaks go the LAD way.

No game recap with the Dodgers is complete without a discussion on the bullpen.  Tonight the bullpen was nearly flawless.  They retired 9 of the 10 batters they faced.  The lone blemish was a Jeff McNeil single off Brusdar Graterol in the 7th.  Daniel Hudson struck out two of the three batters he faced.

This was a different Craig Kimbrel tonight.  He was clean and efficient.  He struck out Pete Alonso on a 97 MPH 4-seamer up in the zone with a lot of late movement.  This was the Chicago Cubs version of Craig Kimbrel and not the CWS version.

The pitching stopped the Mets on 3 hits and 1 walk on the night.

Overall this was an excellent team win. Especially for the Cat Man.

Martín Pérez was interviewed on MLB Network yesterday and he was really engaging. Likes to sing while grilling. His Dad talked him into choosing baseball over a singing career. Dad’s did good. Other than being 31, would love him being a Dodger.

McKinstry seems like a perfect MLB bench player. Glad to see him back up.

Betts voted best for May, Joc at 9th.

Really not sure how Zmac is going to do with a couple of at bats per week. I think he’s still at the stage where he needs to play every day to keep his hitting eye. The best thing for his career might be to be included in a trade this year.

We’re going to need a closer next year, assuming management would still prefer to use Treinen in max leverage positions rather than just the 9th inning.

How about Knack, White and Zmac for David Bednar. Probably not enough for the Pirates to part with him since he has 4 years of control after this year.

If you don’t like puns, don’t read the following:
Someone on Twitter this morning suggested that Catman have tee shirts printed to give each guy he whiffs. They would read “Tony Gonsolin Struck Meowt”.

Gonsolin, Graterol, Hudson, Kimbrel. We threw our best at them. And shut them down. After Anderson, who’s up today?

Lux looks like he’s coming around. I’d like to see a more aggressive swing on strike one. Gap something or send it over the wall.

I too like Martín Pérez. I do fear that this year is a fluke that cannot be sustained. He has been under 4.00 ERA only once (2013 – 3.62). He is a free agent after this year. I think it was in a MLBTradeRumors chat that I read that the expectations are that Pérez will be traded, but because of his history, it will not be a big haul for Texas. With the way he has been pitching he seems worth the risk, but not for any top talent. Someone will overpay, but I doubt it will be AF.

Just a really good time to be a Dodger fan.

With May, before his UCL, and with Gonsolin the Dodgers can and have developed pitchers.

Thus one has (should?) be optimistic about Nastrini, Maddux, Stone, Miller, Pepilot, Knack, etc. Wait, even Andre Jackson and Grove.

Lots of great positional depth too.

The MRI results came back for Blue Jays left-hander Hyun Jin Ryu, and the diagnosis is alarming. He has suffered a forearm strain and elbow inflammation, manager Charlie Montoyo told reporters (including Keegan Matheson of MLB.com).

Toronto didn’t provide much else on Ryu’s timetable. Montoyo said he’d be out “multiple weeks,” and he’s slated to undergo further testing to determine the severity of the issue. A forearm strain diagnosis is always alarming given how often that terminology is a precursor to Tommy John surgery, but there’s no indication that’s on the table at this time.

Does not sound too good for Ryu. Looks like another team will be looking for pitching. Toronto is in an excellent position for one of the Wild Card teams. They are not going to back down now.

I guess the Dodgers could be in a position to take advantage of that market need. At a minimum Price could be moved, but also Grove/Heaney/Jackson?

Clayton Kershaw will have a rehab start with Rancho on Sunday. Could rejoin the Dodgers after that if all goes well.

Max Muncy (and Andrew Heaney) will start a rehab assignment with OKC this weekend. Muncy has hit on the field the last couple days.
﻿
4:01 PM · Jun 2, 2022