Now That Was Ugly 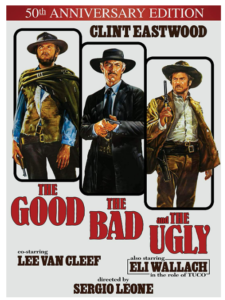 A game that started out so promising and ended up a stinker.  The Good, The Bad, The Ugly is one of my top two favorite Westerns (Tombstone #1).  Whenever it comes on, I am in front of the big screen in my office watching the same as if it were my first time in the theatre.  The difference here is that I hope I never see anything like I saw in last night’s game ever again.  But strangely, this game had all the elements of The Good, The Bad, The Ugly.

The Good – A bases clearing 3-run double by Will Smith in the first.  For the second game in a row, the Dodgers struck fast.  Last night, after a pair of walks to Freddie Freeman and Trea Turner, with two outs, Max Muncy hit an infield single to load the bases.  Will Smith stepped to the plate and on a drive to right center, he brought in all three runs with a stand up double.

The Dodgers got 9 hits and 6 walks, but could not score again.  But we can wait for the Ugly.

The Good – Justin Bruihl, Evan Phillips and Alex Vesia.  Bruihl pitched a perfect 5th inning with 1 K.  Evan Phillips lost his 18 consecutive batters retired streak, but only surrendered a walk to Ketel Marte on a 3-2 pitch in the 6th.  An animated Alex Vesia was even more impressive with 2 Ks in his perfect inning of work in the 7th.

The Good – Tony Gonsolin for 3 of his 4 innings.  In those three innings, Tony allowed 1 hit (double to David Peralta), and 4 strikeouts.  The third inning?  Now to…

The Bad – Gavin Lux’s defense – Much has been written about Lux’s errant throws at times.  Contrary to what others may say, Lux has been much improved in that regard for this season, until the third inning.  On a hard hit ground ball hit right at Gavin, he fielded it fine, but inexplicably threw wide to 1B (okay VERY wide) for a 2-run scoring error.  He had all day, and maybe that was the problem.  He seemed to just lose concentration.  No excuses.  He messed up.  He needs to own it, and he did.

Some will blame this loss on Gavin, because they appear to be emotionally invested in Lux not playing well, and have been for some time.  He made an error.  It was his first of the season, and it will not be his last.  Get over it.  What many will ignore is that just as much fault lies with…

The Bad – Tony Gonsolin’s 3rd inning.  Gonsolin was sailing through this poor excuse of a ML lineup when he too seemed to lose concentration.  On an 0-2 splitter, he gives Geraldo Perdomo (.176 hitter) a pitch he can hit, and he singles up the middle.  Next batter is Jose Herrera, an .059 hitter (1-17), and Gonsolin walks him on 4 pitches.  The first pitch to Daulton Varsho was in the dirt and all Smith can do is keep it in front of him, and the runners move.  That was critical as it took the team out of a DP position. Varsho then hits the ball to Lux, and…well, we already discussed that.

But that was not the end. The next batter was Pavin Smith, who singled on a 1-2 splitter up the middle to score Varsho, and the score is tied.  Gonsolin gets the next two batters, but then hits Seth Beer on an 0-2 pitch.  Mercifully, on the 33rd pitch of the inning, he induced Ketel Marte to fly out for the third out.

Then came the three Good moments, until…

The Bad – Alex Vesia came out to pitch the 8th, but when Torey Lovullo PH the RH Cooper Hummel for the lefty Pavin Smith, Doc summoned for the Bazooka.  For the Doc hating second guessers, nothing wrong with this move.  Brusdar Graterol had not given up a run in his first six appearances of the season.  In 5.2 IP, he allowed 2 hits and 3 walks. Decently efficient.  But not last night.  He walked Hummel, a .152 hitter on 4 pitches.  The next batter, David Peralta, he grooved a 1-1 slider, and Peralta did not miss it.  Bazooka got the next three batters, but as Vin used to say…The damage was done.  Now to…

The Ugly – The Dodgers clutch hitting, or lack thereof.  I have heard fans get exasperated over leaving RISP.  But hitting into FIVE double plays is not the answer for leaving too many runners on base.  In innings 2 through 8, the Dodgers put the leadoff man on base in 5 of those seven innings.  In one of the other two innings, the second batter got on base.  Now usually when you get that kind of production from the leadoff spot in the inning, a team can expect to score runs.  Not last night. Thanks to FIVE double plays, the Dodgers could not score on easily the worst team in the Division.

2nd Inning – CT3 and Lux lead off with singles.  Mookie Betts flies out, and Freddie hits into DP #1.

3rd Inning – Trea Turner walked, but was erased when he broke for 2nd too soon on an attempted steal, and Zach Davies easily threw him out.

7th inning – With one out, Chris Taylor singled.  PH for Lux, Hanser Alberto singles.  With runners on 1st and 2nd, Mookie hits a fly ball in LF, and for whatever reason, CT3 took off running, and was easily out on the throw back to 2nd, for DP #4.

8th inning – Freddie singles to lead off the inning.  With one out, JT doubles putting runners on 2nd and 3rd.  Max Muncy is intentionally walked, and Will Smith came to the plate.  The last time Smith came to bat with the bases loaded, he hit a 3-run double in the first.  This time, Smith grounded into the 5th DP of the game.

Peralta hits his 2-run HR in the bottom of 8th, and game, set, match.

The Dodgers outhit the DBacks 9 to 4.  But wins and losses are determined by the number of runs scored.  The DBacks had 5 to LAD 3. We will never know if the game would have turned out differently if Gonsolin does not throw the WP to take the team out of a DP situation of their own.  We will never know whether Lux could have made the throw to TT at 2B to turn two.  No What IF games.  The Dodgers lost on a game where there were components of The Good, The Bad, The Ugly, and The Ugly was the biggest stinker of all.