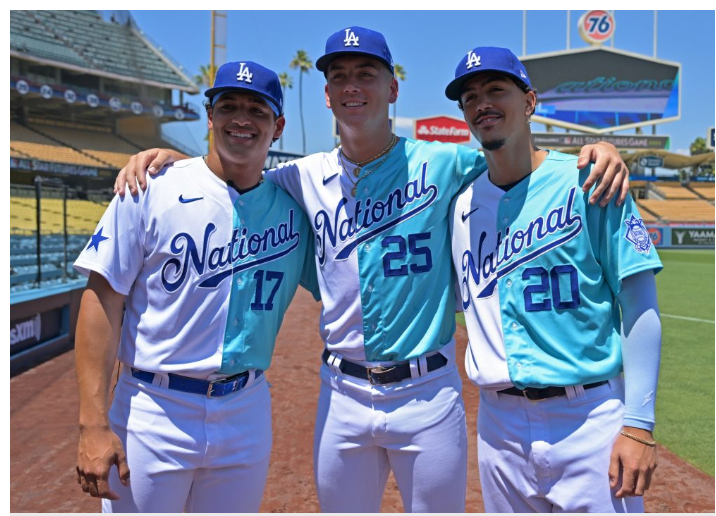 Dodgers MLB beat writer, Juan Toribio, had opined as to what LAD prospects will be counted on in 2023.

What caught my eye was that there was not a single mention at all about Michael Busch or Jacob Amaya.  While they are still considered rookies, I am assuming that Toribio is excluding Ryan Pepiot, Michael Grove, and Andre Jackson because of their innings pitched in 2022.  As it is currently configured, all three will see the mound with the Dodgers in 2023.  Starting or relieving is still to be determined.

At 25, if Busch is not going to play for LAD this season, or just occasionally, it might be the best use of his value to include him in a trade.

The Dodgers have an abundance of DHs.

With CT3, Max Muncy and Mookie Betts all available to play 2B, the chances for Busch getting 2B time or DH time are not promising.

The Carlos Correa saga is getting interesting.  A NYM source spoke with Mike Puma, NY Post, and said that the odds of Correa signing with NYM is 55%.  Scott Boras is still taking calls from other teams, but is telling all interested teams that they are not budging on years or salary.

Baseball Prospectus (BP) put out the 1st Dodger prospect ranking.  They have included a list of 23 prospects.

Five of last year’s top ten have dropped down the list.

BP also considers the LAD prospects as RHP heavy.  10 of the 23 are RHP.

Vargas, Miller, Outman, Grove. That’s my list. If we were a small market team a couple of those guys, if not all of them, would already be cutting their teeth against ML competition.

Busch is traded. Probably for pitching depth. Pages can be stashed a while and Pepiot is spot start and in the bullpen, for a lot of innings.

“Scott Boras is still taking calls from other teams, but is telling all interested teams that they are not budging on years or salary.”

Up yours Bora$$. Your client is damaged goods.

Every time we think Boras has finally met his match, he somehow overcomes his obstacles and gets the contract he wants for his client. This will certainly be an interesting case study.

You mention Grove but not Stone. Was that just a typo or do you actually prefer Grove over Stone?

I’ve been surprised by the positive response from Dodger fandom this offseason at the likelihood of seeing a lot of innings from our young kids this year. I wonder if they’ll still feel that way if the kids get off to a slow start. I’m willing to give them a fairly long leash, even if that means we struggle to reach the playoffs for one year.

Our catching is very deep. Cartaya, Fernandez and Rushing are all potential MLB starters and possibly All Stars. We don’t need to keep all three. My hope is that when AF decides which one (or two) to trade for positions of greater need, he chooses the right one(s) to keep.

It feels to me like what is happening is a result of the reset. If the Bauer cap hit wasn’t there it would have made sense to add Bogaerts and go from there. I’ve said it before, we can be eliminated in the first round without having to spend $300 million.

Rich Hill signs a one-year deal with the Pirates.

Eovaldi is signing a two-year deal with the Rangers.

Let The Projections Begin
The Future of Long Term Contracts For The Dodgers
wpDiscuz
6
0
Would love your thoughts, please comment.x
()
x
| Reply