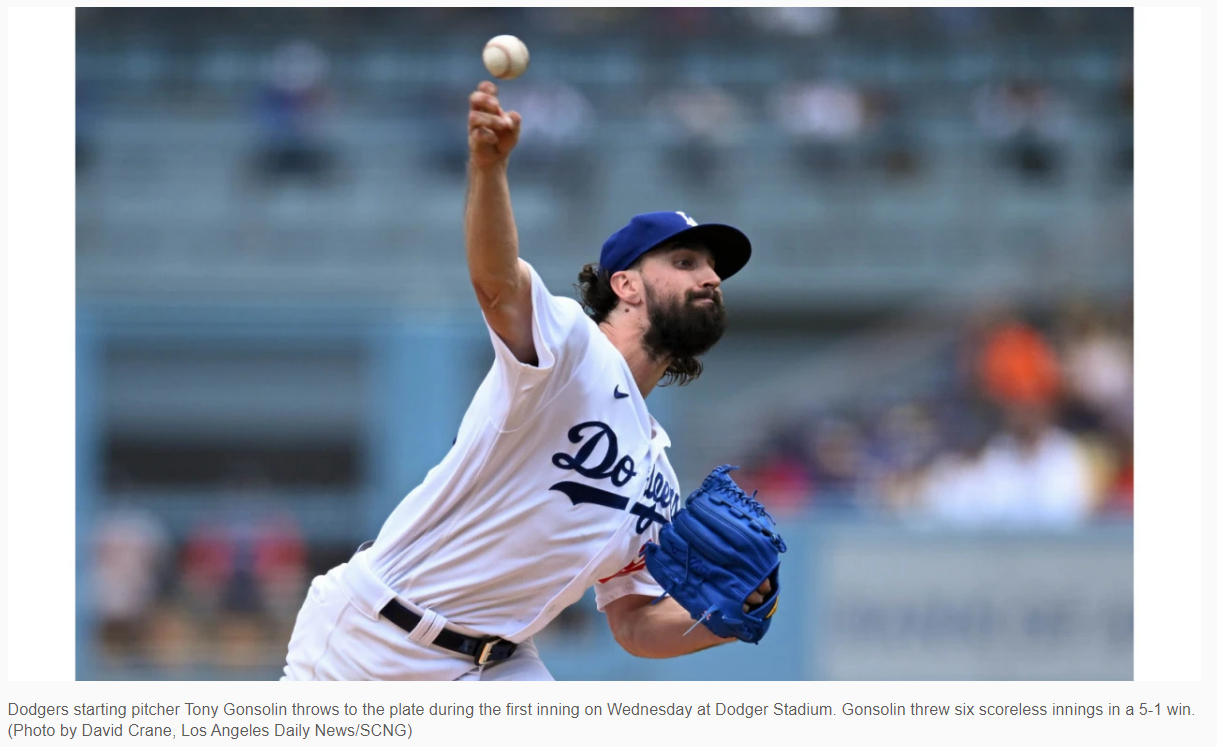 Pitching Injuries – One thing I did not need to hear was that the Dodgers have lost Andrew Heaney for at least ten days.  It was nearly 7 years to the day that Brandon McCarthy, another oft-injured pitcher, was placed on the IL and underwent TJ surgery.  Heaney has already had that procedure.

Scott Kazmir was also an oft injured pitcher signed by the Dodgers in 2016, but had hip and intercostal issues that summer.  He signed a 3-year deal but lasted into August his first year before getting injured and never pitching for LAD again.

We can also talk about Jimmy Nelson and Danny Duffy.  I will leave Cole Hamels out of this discussion because nothing was really expected of him, and he did not re-sign.

Heaney has had issues with his elbow throughout his career, but never his shoulder.  So this is a new concern, and we are all going to need to wait to see what the doctors advise.  Is Heaney going to be another example of an oft injured pitcher that gets bit by the injury bug early in their contract?  At least with Heaney, AF has learned not to give this type of injury risk pitchers multi year deals.  I have learned to not speculate on these things.  I prefer to hide my head in the sand and only think positively until the bad news is confirmed.

Dodgers Personality – I have been calling for some personality for the Dodgers, and I think we have found a very capable character replacement for Kike’ and Joc…Hanser Alberto.  And then Dansby Swanson has to go and ruin it by stealing a hit from him in what was an outstanding defensive play.

Trouble With That Second Inning – In the 9th inning of Wednesday’s game it looked like CT3 took a bad angle on Matt Olson’s double.  Ozuna’s double was a shot and was a deserved double.  Mitch White just cannot pitch that second inning.  Olson probably scores on Ozuna’s double, so CT3’s bad angle (alleged) did not cost the Dodgers.  Mitch White is working his way back to the OKC rotation.  I was hoping he could take that next step and become the long man for the Dodgers.  But for two consecutive games now, White has had issues getting out of that second inning.  That is a problem he is going to need to work on at OKC.

Dodgers Bench Depth – With Andrew Heaney going on the IL, for who knows how long, the Dodgers chose to add to their bench rather than the bullpen, and recalled Zach McKinstry.  The team has 4 off days in the next 15 days, so that may explain some of the reasoning.  Another reason is that Zach is already on the 40 man and his start to 2022 has been outstanding.  With 58 PA, Zach is slashing .404/.448/.673/1.121.  He has 3 doubles, 4 triples, 1 HR.  12 K and 5 BB.  Interestingly, Zach has had 6 GIDP opportunities, and has not grounded into a DP this year.

Zach is a LH hitter, but he has good numbers against LHP at AAA.  He is 6 for 15 with 1 double and his only HR coming off LHP.  Zach is 6-14 WRISP, including 2 doubles and 3 triples.  And he can play all over the field.  Will that translate at the ML level?  Zach has been solid when he was healthy.

There is no mention of Heaney’s IL being retroactive, so it would seem that 10 days may not be enough, but we will let that figure itself out.  Regardless, he went on the IL today, so by the time he can come back, the May 1 roster reduction will be in effect (Game 3 against Detroit).  There will be off days on Monday and Thursday sandwiching a two game series against SF.

Batting Against LHP – The Dodgers have not hit LHP for a while.  I would like to say that Max Fried pitched a great game (and he did), but the Dodger batters were chasing pitches all night.  Overall, only Arizona is a worse hitting team against LHP than are the Dodgers.  Their batting line against LHP – .157/.250/.213/.463.  The Dodgers are 29th out of 30 for BA, SLG, and OPS.  They are 26th in OBP.  So no, it wasn’t just that Max Fried owned the Dodgers (and he did).  The Dodgers just cannot hit LHP.  And outside of Kevin Pillar, none of the OKC guys are RH hitters.  I am not including Miguel Vargas, because I do not believe he is a viable possibility of being promoted.

Player of the Game – Freddie Freeman – Freddie went 3-4 with a HR (2) and 2 RBI’s, and made a great defensive play against Ozzie Albies in the 1st inning.  His HR was a line bullet with an exit velo of 112+ MPH.

Cody Bellinger – Cody Bellinger continued his trend of 2 hits and then 0 hits.  That is the 7th game of the 2 hit or 0 hit game.  Let’s hope that he can beat that trend in Game 1 vs San Diego.  Cody went the other way for the double, but blistered the triple. Both were good signs.

Edwin Rios – Edwin Rios fits right in with the all or nothing batting attribute.  He struck out twice, but crushed a HR into the RF Pavilion.   There is no question about Edwin’s power.  He just needs to make better contact.

Tony Gonsolin – I wanted to save the best part of the day for the last.  Tony Gonsolin battled without a fastball, but was able to command that slider and splitter and made life miserable for the Braves.  He only struck out three batters, but nobody barreled him up (except Albies in the 1st).  He induced a pair of 5-4-3 DP.  His ground out to fly out ratio was 8 to 3.  The only hit against him in 6.0 IP was an infield single against the shift by catcher Manny Piña.  He threw 83 pitches (50 strikes).  I cannot remember the last time he pitched this well.  The Catman needs to string together 5-6-7 games like today.

The Dodgers are off on Thursday, and open a 3-game series against San Diego (in San Diego).  Pitching matchups figure to be:

Unfortunately I am going to miss both Saturday and Sunday’s games because I will be at River Cat Stadium watching the OKC Dodgers against the Sacramento River Cats (SFG).  The Dodgers won the first two games of the 6-game series.

In honor of the Catman.