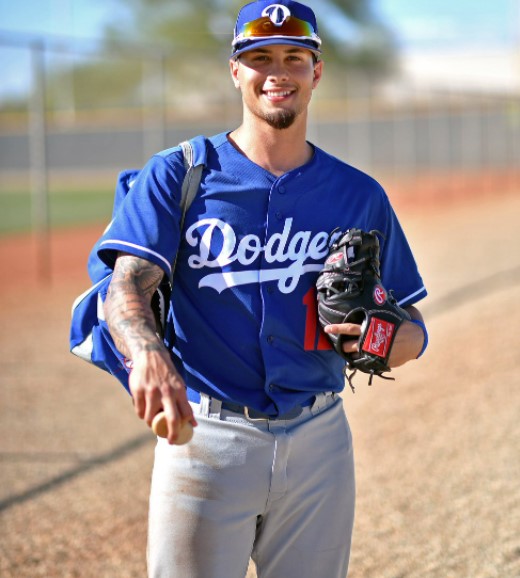 The 04-23-2022 MiLB Summary comprises the Giants AAAA players defeating the Dodgers AAAA players.  The best thing about this night was the final out and then the fireworks show.  This was a disaster from the first batter, LaMonte Wade Jr. who walked.  The game ended with Ty Kelly, a utility infielder, on the mound for the Dodgers getting the final three outs.  What happened in between was just ugly.  I caught up with a friend of mine at the game.  He was at the first two games of the series, both OKC wins.  So I told him this was all on me.  He felt bad because he was wearing his lucky Blake Treinen jersey.  I was wearing my Walker Buehler jersey.  I am not going to wear that one tomorrow.  With Kershaw going for LAD on Sunday, I will be wearing my #22.

I will have some overall observations from both games for Monday’s blog.  But for now….

The pitching from Robbie Erlin, to Jose Adames, to Daniel Zamora was not effective. There were two clean innings on the night; one by Erlin (2nd) and Adames (6th).

There were a couple of good defensive plays including a web gem by Eddy Alvarez.

Tomás Telis – Got on base three times with a line single (the hardest-hit ball by the Dodgers), and two walks.  Scored the only run. Showed a tremendous arm behind the plate.

On to the Sunday six-game series finale, with OKC 3 wins and Sacramento 2 wins.

Left-hander John Rooney started for the Drillers and had the kind of game we have been waiting for.

Through five innings he gave up one run on one hit while walking two and striking out four. The one run came on a home run by Cardinals catcher Julio E. Rodriguez in the fifth inning. He threw 68 pitches, and 41 for strikes.

Right-hander Justin Hagenman followed Rooney in the sixth inning. He had three quick outs in the sixth but left early in the seventh after giving up a two-run home run to first baseman Malcolm Nunez.

Right-hander Tanner Dodson finished the seventh inning but ran into some rough going in the eighth inning with rain pouring down. He walked two, gave up a single, hit a batter, gave up another single with two runs scoring.

Right-hander Melvin Jimenez replaced Dodson with two on and one out. He quickly gave up a run-scoring single but was then able to record the two outs needed to get out of the inning. He gave up one more run in the bottom of the ninth on a single and a double.

Where do we start on this one?  The Drillers started with the very first batter in the top of the first inning.

James Outman kicked off the party with a single to left field. He was followed by three more singles in the inning by Michael Busch, Andy Pages and Ryan Ward. Throw in a balk and a Jacob Amaya (pictured) two-run double and the Drillers led 4-0 before the fans settled in.

The Drillers were facing left-hander Domingo Robles who came into the game with a 0.75 ERA in 12 innings pitched. When he exited the game his ERA was 4.60.

The Jacob Amaya show continued in the top of the sixth inning as he hit his second home run of the game, a two-run shot to center field.  He added a single in his last at-bat in the eighth inning.

One more run scored in the top of the ninth on an Andy Pages groundout. 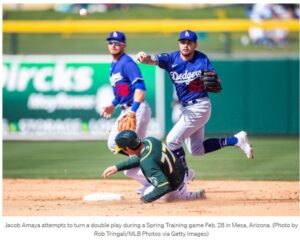 There were at least four choices but Jacob Amaya is the unanimous choice. His stat line for the evening included a single, two doubles, two home runs and six runs batted in. He entered the game with a .265 batting average and finished the day with a .359 average.

Left-hander Lael Lockhart made his first professional start on Saturday afternoon in the first game of the 7-inning double header with a game-time temperature of 72 degrees.

He was opposed by right-hander Gavin Williams who was a first-round pick by the Guardians in the 2021 First-Year Player Draft.

Lockhart escaped without a run in the third inning facing bases loaded and one out situation by striking out the next two Captains. His line in his three innings included three hits, 2 walks and seven strikeouts. He threw 66  pitches, 37 for strikes.

Left-hander Jose Hernandez replaced Lockhart in the fourth inning and pitched two strong innings with one hit and one strikeout. Twenty-one of his 28 pitches were for strikes.

Right-hander Jordan Leasure went to work for the final two innings recording all zeros except for five strikeouts. In five appearances this season Leasure has pitched 9.1 innings with a 1.93 ERA and 0.96 WHIP. He has struck out 21 and walked five.

In the first inning Eddys Leonard led off for the Loons and promptly laced a double into left field. He scored on a wild pitch followed by a double-play ball.

After the first inning, the Loons were held scoreless.

They were no doubt pleased to see Gavin Williams leave after five innings. His fastball was topping out at 97 mph while holding the Loons to two hits and three walks while striking out seven. The Loons did have one more hit off reliever Cade Smith making it three hits for the game.

It was a tossup between pitcher Jordan Leasure and center fielder Eddys Leonard who got the nod.

Leonard hit the ball hard along with his double, scored the games only run, hit in the leadoff spot and played center field for the first time this season. He looked at ease in the position and made two very nice running catches and one strong throw from the outfield.

Right-hander Gavin Stone started for the Loons making his third start of the season. He pitched 4.1 innings giving up two runs on a home run in the fourth inning and a balk in the fifth inning.

Right-hander Ryan Sublette followed Stone and ran into big trouble in the top of the sixth inning giving up three hits and three runs while walking one and striking out one.

Right-hander Antonio Knowles came on in the top of the seventh inning with the Loons trailing 5-2. He survived a single and a HBP by striking out Captains second baseman Raynel Delgado.

The Loons bats were still ice cold in the second game of the twin bill. Going into the sixth inning they had but one hit on a Jonny DeLuca single.  At that point in the game they had drawn eight walks and were able to covert only one them into a run in the third inning.

Designated hitter Joe Vranesh with his home run in the sixth inning.

The Quakes jumped out to a 5-0 lead in the top of the 1st.  The Nuts came right back and scored 4 in their half of the 1st, on some wildness, and tied it in the 2nd.  The Quakes scored three in the 4th, and the closest the Nuts could get to the Quakes was one run.  RC stretched out the lead to 4 in the 6th, but a pair of Modesto runs, one in the 8th and one in the 9th, got them to be able to bring the go-ahead run to the plate in the 9th, but Kenneth Betancourt got the final out for the Quakes win.

7 Quakes pitchers took to the mound in this game, and a couple of them pitched effectively.  The pitcher that a lot of Dodgers fans were hyping after a couple of solid outings, Edgardo Henriquez, started for the Quakes and was staked to a 5-0 lead.  He pitched to five batters, and did not record an out.  1 single and 4 walks.  4 of the 5 runners scored.  Don’t judge the outing.  He is still 19 years old playing full-season A Ball.

Huei-Sheng Lin relieved Henriquez and pitched 2.2 innings surrendering a run on 2 hits, 2 walks, and 2 strikeouts.  20-year-old RHRP Frankelyn Feliz pitched 2.0 innings but allowed 2 runs on 1 hit and 2 walks, with 2 Ks.  15th round pick in 2021, RHRP, Madison Jeffrey walked 2 and struck out 2 in 0.2 IP.  The 8th-round pick in 2021, Ben Harris, was probably the most effective pitcher on the night.  In 1.1 innings of scoreless relief, he allowed 1 hit, 2 walks, but got 4 Ks.  Kelvin Bautista got the first two outs in the 9th, but a fielding error and two singles brought the go-ahead run to the plate.  Kenneth Betancourt was summoned to get the final out, and he did, for the save.

The Quakes got the leadoff man on base with a walk, but Jake Vogel was erased on an attempted steal.  After a strikeout, the fun began.  Jose Ramos double, Diego Cartaya was HBP, Luis Rodriguez singled to load the bases, and Yunior Garcia coming to bat.  Garcia walked to score Ramos, and with the bases remaining loaded, Luis Yanel Diaz slugged 3-2 pitch grand slam HR (5) into left-center field and a 5-0 lead.

In the 4th, Julio Carrion singled to open the inning.  After two outs were recorded, Jose Ramos walk.  Diego Cartaya followed with a run-scoring single of Carrion.  Luis Rodriguez followed with a single to score Ramos.  Cartaya scored on a Modesto fielding error.

In the 6th, Jose Ramos tripled to open the inning.  After 1 out, Luis Rodriguez walked, and Yunior Garcia hit a 3-run HR, his first of the year.  That was the scoring for the Quakes.

Player of the Game – Jose Ramos 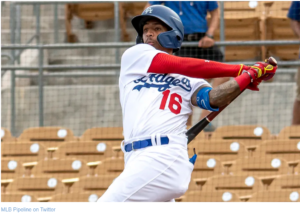