For the second game in a row the Isotopes jumped out to a 5-0 lead.

The Dodgers outhit the Isotopes 10 to 7, but wildness led to trouble for Andre Jackson and Yadier Alvarez.

A 1st inning leadoff HR (4) by Sean Bouchard gave Albuquerque the early lead that they would not relinquish. In the 2nd inning, Andre surrendered 2 singles, a walk, a WP, and a double that would produce 3 runs for Albuquerque.

Yadier Alvarez made his second appearance in this one, but a walk, double and sac fly would give the Isotopes their 5-0 lead.

Caleb Ferguson made his 3rd rehab appearance.  He allowed a single and issued a walk.  A line drive up the middle was right where Ty Kelly was playing.  He got the line drive and stepped on 2nd for the DP.

Daniel Zamora (2.0 IP) and Garrett Cleavinger (1.0) finished the game without a run.  Zamora had 3 Ks, while Cleavinger allowed a single and walk, and 2 Ks.

Kevin Pillar provided all of the offense.  He crushed a 3-run HR off Zach Neal, and blooped a single to score Miguel Vargas for run #4.  But that is as close as they would get.

Kevin Pillar had three hits while Miguel Vargas and Jake Lamb had two hits each.

With three hits and 4 RBIs, Kevin Pillar is an easy choice. 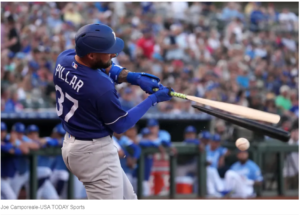 Yefry Martinez started and pitched 4.0 innings.  He ran into trouble in the 2nd.  After a lead off HR and two singles, a fielder’s choice put runners on 2nd and 3rd.  Another single scored two more, and that was the only time that Albuquerque was in the game.  Ramirez allowed 6 hits, while 4 were in the 2nd inning.

Singles in the 1st inning by Zach McKinstry and Miguel Vargas and walk to Jake Lamb, loaded the bases for Ryan Noda who slugged an opposite field grand slam and a 4-0 lead.

After the Isotopes closed to within 1. After batting through the lineup in the 1st, the Dodgers batted 10 and scored 5 runs in their half of the 2nd.  The inning started with Miguel Vargas’ 2nd hit of the game followed by a walk and Andy Burns double scored 2 runs.  Jason Martin singled to score Burns.  A Drew Avans single and a Tony Wolters walk loaded the bases for Omar Estevez.  Omar singled home a pair and the lead was now 9-3.

In the Dodgers 14 hit attack, every OKC batter had at least one hit, and five batters had two hits…Zach McKinley, Miguel Vargas, Andy Burns, Tony Wolters, and Omar Estevez.

With a HR and double, and 5 RBIs, Andy Burns gets the nod for this game. 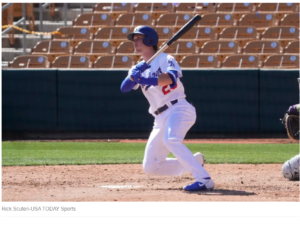 The Drillers and Wind Surge will now attempt to begin their series with a doubleheader on Friday, May 6 with the first game beginning at 5:05 p.m. The schedule now calls for a single game on Saturday, May 7 staring at 6:05 p.m. The series will conclude with another doubleheader on Sunday, May 8 with game one starting at 12:05 p.m.

The scheduled sixth game of the series will now have to be made up in Tulsa during a series that will run from June 14-19.

The weather forecast for Friday in Wichita is considerably better. Partly sunny skies are predicted with a high temperature of 71 degrees.

Right-hander Gavin Stone started for the Loons and had his changeup working. He tossed six innings giving up two hits and a walk while striking out three. He has pitched 11 innings in his last two starts with no runs and just four hits.

Left-hander Jose Hernandez replaced Stone in the top of the seventh inning and induced a 6-4-3 double play to close out the inning and game after loading the bases on a walk and two hits.

The Loons scored in the bottom of the first inning on a two-run single by catcher Ryan January who is hitting .375 over his last seven games.

Player of the Game – Gavin Stone 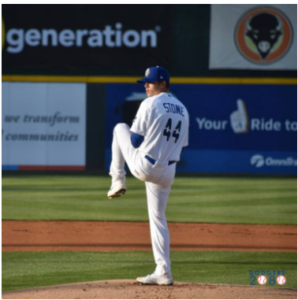 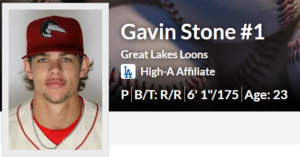 After winning the first game of the seven-inning double header, the Loons were looking to take the second game and climb back to the .500 mark on the season. Great Lakes pitching has smothered Beloit for two games limiting them to three singles.

Loons pitchers held Beloit to one run on seven hits in the second game of the twin bill.

Left-hander Lael Lockhart made his second consecutive start in which he limited the opposition to one run over four innings. He walked two and struck out two.

Another left-hander, Julian Smith earned a save in the seventh inning limiting the Sky Carp to one hit and erasing the runner by picking him off.

The Loons had only four hits but turned them into three runs aided by two walks.

They again scored in the first inning. This time on a Leonel Valera triple bringing Jonny DeLuca home.

The Loons pitching continues to dominate, and Lael Lockhart was selected as the player of the game. 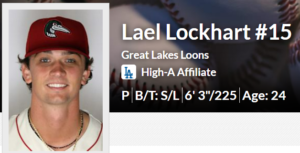 The highly unpredictable and inconsistent Edgardo Henriquez started. In 4.0 IP he was touched only for a single.  He also recorded 6 punchouts in his 4.0 innings.

Huei-Sheng Lin followed Henriquez to the mound in the 5th, and immediately ran into trouble.  A single and HR cut the Quakes lead in half; 4-2 after 5.

With Lin still on the mound, Lin surrendered a HR, cutting the lead to 1.  A walk and HBP put two runners on.  On a ground ball, an unearned run scored the tying run on a throwing error trying to complete the DP.

Kelvin Bautista relieved Lin and got the final out of the 7th.

After the Quakes could not score after loading the bases with one out in the top of the 9th, with Bautista still on the hill, Justin Farmer opened the inning with a single.  After two outs and a WP, LHRP Bautista intentionally walked Pierce Jones.  This was presumably done to face the left-handed Max Ferguson vs the right-handed Jones.  The strategy failed as Ferguson had a walk off single for the come from behind victory.

In the 2nd inning, an Austin Gauthier single and Jake Vogel triple scored the initial run of the game.

In the 4th, Damon Keith doubled to open the inning.  A walk to Gauthier put runners on 1st and 2nd.  Yeiner Fernandez singled to score Keith.  Jake Vogel hit into a force out and moved Gauthier to 3rd.  Julio Carrion doubled to score Gauthier and move Vogel to 3rd.  Vogel scored on a ground ball.

The Quakes put runners on base in 4 of the final 5 innings, but could not punch one across.

Austin Gauthier went 3 for 3 with a triple was the clear-cut Player of the Game.