The Dodgers season seems to have been rocky but the same must be true for the rest of the league. OKC is presently 3.5 games up on the El Paso Chihuahuas in the Pacific Coast League Eastern Division.

Andre Jackson started for the Dodgers and his woes continued over 3.2 innings. Fours were wild as he gave up four runs, issued four walks and struck out four.

Jackson was followed by Aaron Ochsenbein who was making his AAA debut, but it was not the debut he might have imagined. He too was plagued by high numbers giving up five runs on four hits and two walks.

Justin Bruihl was the third pitcher for the Dodgers in six innings. He fared considerably better tossing 1.2 innings while allowing no runs with one hit, two walks and three strikeouts.

Marshall Kasowski worked the seventh inning giving up an additional run on two hits and a walk while striking out one.

Justin Hagenman finished up the eighth inning striking out two and allowing one hit.

The Dodgers started fast scoring five times in the top of the first inning. Jake Lamb hit a three-run home run following a Drew Avans walk and a Miguel Vargas single. Jacob Amaya singled home another run while Omar Estevez brought in the fifth run with a sacrifice fly.

The Dodgers sixth and last run came home in the fifth inning on a bases loaded walk to Estevez following a Ryan Noda double, a Jacob Amaya walk and an Andy Burns single.

Jacob Amaya, Ryan Noda and Miguel Vargas all had two hits. Jake Lamb makes the cut with his 15th home run of the season and his three runs batted in.

The Drillers notched their fifth one-run victory in this six-game series with Wichita. In doing so they took a three-game lead on the Arkansas Travelers. They have nine games left to play before the mid-season break, the last three with Arkansas.

The Drillers used five pitchers in the game with a few anxious moments but were able to get the out when they most needed it.

Jose Martinez started for Tulsa and pitched three innings giving a run on three hits with no walks and three strikeouts.

Gus Varland pitched the fourth inning and struck out three while walking one.

Austin Drury, the only left-handed used by the Drillers on Sunday, logged 1.2 innings and did give up a run on three hits.

Nick Robertson stood tall for the Drillers pitching 2.1 innings of shutout ball giving up but one hit while striking out three.

Jose Adames came on with all cylinders firing at 100 mph more than once and pitched the ninth and tenth innings. He gave up one hit, walked one and struck out three. He was saved by an amazing catch by shortstop Leonel Valera in the top of the tenth inning.

Tulsa scored early but not often. In the bottom of the first inning they put a run together on a Devin Mann single, a James Outman walk and a Hunter Feduccia RBI single.

Justin Yurchak knotted the score at 2-2 with his first home run of the season in the fifth inning. It was the 91st home run hit by the Drillers in 2022 which leads the league.

Still tied 2-2 in the bottom of the tenth inning Leonel Valera started at second base. Jeren Kendall laid down a bunt that would be a base hit but got some help from Wichita pitcher Alex Scherff who threw the ball past first base allowing Valera to score the winning run.

This does not happen very often, but the leaping catch by Leonel Valera did not allow the Wind Surge to take a 3-2 lead in the top of the tenth inning. 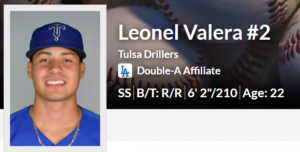 The Loons continued to steamroll over the Timber Rattlers taking the last five games of the six-game series after having lost the first game. It was the second series in a row in which they lost the first game only to sweep the next five. The previous series was with the Dayton Dragons who the Loons now trail by only one half of a game.

Great Lakes has nine more games to play before the mid-season break with the last three being at home against the Dragons.

Right-hander Ben Casparius started for the Loons making his 11th start of the season, the fourth with the Loons. He had his best start giving up only one run over four innings while walking one and striking out four.

Casparius was followed by right-hander Antonio Knowles who did not have one of his better appearances of the season. He recorded only one out giving up an earned run on two walks and a hit.

Another right-hander, Robbie Peto, followed Knowles who had left the bases loaded. Peto in essence saved the game at that point by stranding all three runners with a strikeout and a fly out. He finished the day with 4.1 innings pitched while giving up only one hit. He walked two and struck out seven.

Ryan Sublette was brought in with two outs in the ninth inning and a man on via a walk. The right-handed Sublette earned a save on a two-pitch fly out.

The Loons scored in the bottom of the first inning on a base hit by hot hitting Alex De Jesus following a HBP and a walk.

In the fifth inning catcher Kekai Rios leading off the inning hit the first pitch he saw for a home run to left field.

They scored again in the bottom of the sixth inning when Imanol Vargas coaxed a walk and following a stolen base was driven home by a Jonny DeLuca double. That turned out to be the winning run.

Robbie Peto gets the curtain call for his 4.1 innings in which he dominated the Timber Rattlers and for stranding three inherited base runners. 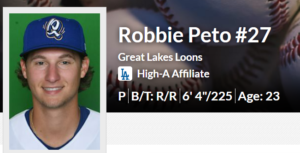 The Quakes started three games back of the Lake Elsinore Storm for the lead in the Southern Division of the California League. They have nine games remaining in the first half of the season and have six of those games with Lake Elsinore.

Benony Robles started for the Quakes and over three innings pitched gave up three runs on four hits and a walk. He struck out four.

He was followed to the hill by Orlando Ortiz-Mayr who pitched two scoreless innings with two hits and two strikeouts.

Four pitchers finished out the game with an inning apiece. Joan Valdez, Osvanni Gutierrez, Carlos De Los Santos and Jhan Zambrano each took  a turn with only De Los Santos giving up  a run while as a group holding the 66ers to two hits.

The Quakes struck for three runs in the bottom of the third inning on a Kenneth Betancourt walk, a Gaige Howard double, a Damon Keith walk and a Julio Carrion bases clearing double.

Tied 3-3 headed into the bottom of the fourth inning the Quakes were able to push across two runs with a Gaige Howard single following walks to Nelson Quiroz, Kenneth Betancourt and Luis Yanel Diaz.

Showing no mercy at that point, the Quakes went on a bit of as rampage in the fifth inning. Following walks to Julio Carrion and Luis Rodriguez, Yunior Garcia and Nelson Quiroz both had RBI singles. Two wild pitches and a Luis Yanel Diaz sacrifice fly brought home two more runs.

The Quakes final run came in the bottom of the sixth when Luis Rodriguez who had walked scored following a Kenneth Betancourt walk and a Luis Yanel Diaz double.

Yunior Garcia and Gaige Howard each had two hits. However, the honor goes to Kenneth Betancourt who reached base in all four of his plate appearances with one hit and three walks. He scored three times. It seems Betancourt has been around for a long time but he is still only 22.

I was fortunate to see Leonel Valera’s leaping catch in yesterday’s game. He also scored the winning run after starting at second in the 10th inning.

In Sunday’s game, Wichita had runners at the corners with two outs in the 10th when Chris Williams hit a line drive that appeared headed into left field for a go-ahead hit, but instead was caught by a leaping Valera.

“I don’t get a base hit today so I just stay focused with the defense,” said Valera, who was hitless for only the second time in 15 games since joining Double-A Tulsa from High-A Great Lakes.

Drillers manager Scott Hennessey added, “He’s one of the best athletes we have in the (Los Angeles Dodgers) organization. And there’s not many guys in baseball that’s going to make that play. … He was way off the ground.”

Valera began the bottom of the 10th on second base as the ghost runner after making the ninth’s final out. On Alex Scherff’s second pitch. Jeren Kendall’s bunt forced a hurried throw that Scherff overthrew to first, allowing Valera to race home with the winning run. In the ensuing celebration, his teammates emptied the water bucket on Valera.

“It was so cold,” a smiling Valera said on the 93-degree afternoon. “It’s a great feeling

It sure seems like the Dodgers need to make some decision between Valera, Leonard, Vivas. Valera is seemingly the least considered, but he is probably the best defensive infielder other than Amaya. I have not seen Wilman Diaz play yet. But as we saw with Eddy Alvarez yesterday, playing defense is secondary. The organization would rather players have that versatility. Valera is about 16 months older than Leonard and 20 months older than Vivas, so that might affect how they are each valued.

Age may well be the deciding factor.

It appears that Leonard is being used more at shortstop, Vivas at second base and DeJesus at third base.

Valera seems to be splitting his time between shortstop and third base but through his six years has played way more time at the shortstop position.

He definitely is the most athletic of the group. Until his surge with the Drillers his at bat skills have lagged behind his athletic ability. Perhaps, and hopefully, he needed a higher level to push him to the next level. With the Loons he would be taking playing time from the others although they could DH but that may also have been a factor in moving him to Tulsa.

Another is simply that he was in a third season with the Loons.Returning for his third season in Midland,he is the team’s career leader in games played at shortstop. Moving to Tulsa may be a good “show us what you have” moment.

They finally have De Jesus where they always envisioned him; at 3B. I think they have experimented with Eddys in CF and I do not think it went well. Probably about as well as Eddy Alvarez in RF yesterday. I think Vivas belongs at 2B. He has the best contact skill of the three. He probably should be the highest rated of the three. I think Vivas is 2 years away from a possible MLB debut.

I am waiting on Rayne Doncon to see when he starts his progression. He is in the US for the first time at ACL (with Diaz) this year. I would love to get down to Arizona to see him, but not this year. I will wait for next year when he is in Rancho.

Kenneth Betancourt has been selected as the MiLB Player of the Week for the California League.

Some Father’s Day Thought Why Hitting A Baseball Is So Hard
The LAD June Swoon
wpDiscuz
5
0
Would love your thoughts, please comment.x
()
x
| Reply