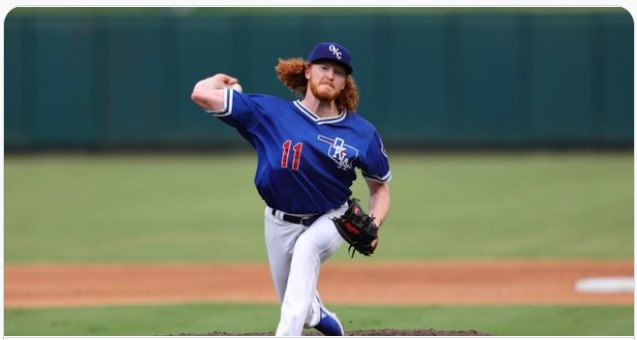 The Dodgers jumped out to a 6-0 lead, but the Space Cowboys scored the next 12 runs.

Dustin May's second rehab outing with OKC was a dominant affair, the fastball got up to 99.9 mph, his curve got whiffs on 4/5 swings, and some of those hacks were pretty ugly. The line:

Bobby Miller continued with his good month of July.  Three out of four were good starts, and two were official quality starts.  Last night was one of those.  He pitched 6.0 innings allowing only 4 hits, and ZERO walks. He retired the first thirteen batters in order, but allowed a single and a one out 2-run HR for the Travelers only 2 runs.  He also had 11 Ks.  11 strikeouts and 0 walks.  That’s a good night even if you do give up a 2-run HR.

It's Miller time!@Dodgers top pitching prospect Bobby Miller carries a perfecto into the 5th, finishes with a career-high 11 K's for the @TulsaDrillers. pic.twitter.com/xx6nZV5z0R

Three pitchers, Nick Robertson, Jose Hernandez, and Guillermo Zuniga each pitched a hitless and scoreless inning.  Zuniga picked up his 11th save.

The Drillers only had 6 hits of their own.  Three of the runs came in the 1st on a Ryan Ward single and Brandon Lewis 2-run HR (13).  Devin Mann drew a walk and scored on a Leonel Valera double.  In the 8th, Jonny DeLuca hit his 5th HR in the 8th.

Emmett Sheehan started and competed 4.0 IP.  His issue on this night was his 5 BB.  He only allowed 2 hits and 2 runs, so he did pitch out of a lot of traffic in those 4.0 innings.  He threw 77 pitches.  He may have been effective, but 19 pitches per inning is not efficient.

If the Dodgers are going to make a big move this deadline, one would have to imagine 20-year-old catcher Diego Cartaya, who has an OBP over .400 and SLG over .500, will be a part of it. And what he did to this baseball … my goodness. https://t.co/eqSI50gH00

Diego Cartaya just hit his second homer of the night

This one actually left the stadium pic.twitter.com/LkcWVAGy7a

Eddys Leonard had 3 hits including his 26th double.  Luis Yanel Diaz hit a 2-run triple in the 3rd, his first triple this year.  Edwin Mateo also had a run scoring double (10) in the 8th.

Five Quakes pitchers were summoned to the mound.  Every one of the pitchers pitched with traffic.  Edgardo Henriquez was out for his 3rd outing in July. His 2.2 IP (46 pitches) were his longest since May 28.  He was out for the entire month of June.  He did not allow a run.  He gave up 2 hits, 1 walk, and recorded 2 Ks.

Orlando Ortiz-Mayr followed with a rough outing.  He completed 3.2 innings.  He gave up 2 runs on 6 hits and 1 walk.

Kelvin Bautista got the win after he blew his 4th save.  He pitched 0.2 innings and gave up 3 BBs.  Martin Santana and Madison Jeffrey finished the game in scoreless fashion.

The Quakes made the most out of their limited opportunities.  They scored a run in the 5th on a Kyle Froemke single, WP, and scored on a 2-base throwing error by the pitcher.

In the 7th, 2 walks and a fielding error scored a second run.  In the 8th, a Yunior Garcia walk, a WP, and a Hector Martinez single to score the go ahead and winning run.

It Is Still A Game Played By Humans
Meet Christian Ruebeck
wpDiscuz
0
0
Would love your thoughts, please comment.x
()
x
| Reply