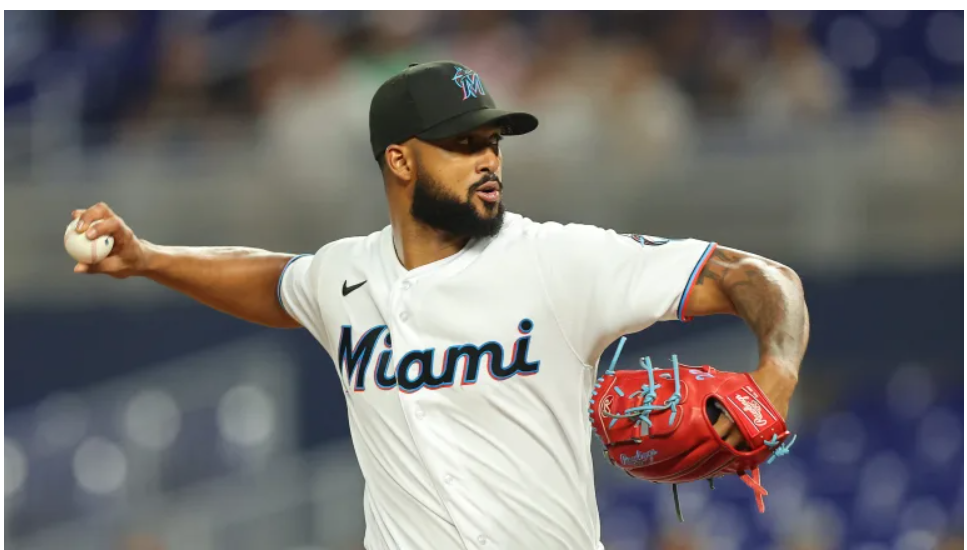 Yesterday was the vote for the CY winners.  It was almost a foregone conclusion that Sandy Alcantara (NL) and Justin Verlander (AL) would be the winners in a runaway fashion.  As it turned out both Alcantara and Verlander were unanimous vote getters.

Has to be even more special for Sandy Alcantara to join his fellow countrymen pic.twitter.com/XNjiM9u38i

Alcantara had six complete games in 2022.  That was more than the other 29 ML teams combined.  The Marlins acquired Alcantara in 2017 along with RHP Zac Gallen, LHP Daniel Castano, and RF Magneuris Sierra from St. Louis for Marcell Ozuna.  The Marlins later traded Zac Gallen to Arizona for Jazz Chisholm.  That indicates that St. Louis traded pitchers that were #1 and #5 in the 2022 CY vote for two years of Ozuna. 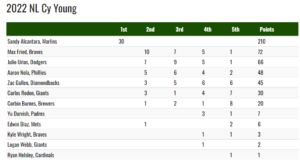 There were 4 voters from The Athletic, and three of them did not vote for Julio Urías:

Jayson Stark was the only The Athletic writer who voted for Urías (3rd place).

The other voters who did not include Urías on the ballot were:

I do not pretend to understand what goes on in the minds of voters.  But Urías was the NL ERA leader and #3 in WHIP, behind Zac Gallen.  How does someone with those numbers not deserve at least a #5 vote.

He had the least number of IP of any of the top vote getters.  Six teams had two pitchers with more IP than Urías, who led LAD in IP: Miami, Arizona, St. Louis, San Diego, San Francisco, and Atlanta.  Individual awards are not even remotely as important as team awards/championships.  But since they are voted on, they can be commented on and discussed.

I certainly would like to ask any of the 8 voters who did not vote for Urías the reason why.  Not to change their mind, but to try and understand their reasoning.

On the AL side, Justin Verlander won his 3rd  CY Award.

He is the 11th pitcher to win the award 3 or more times.  Only 4 pitchers have more CY Awards:

That is three current MLB pitchers with 3 CY Awards.

Verlander was joined by a couple of newcomers atop the vote totals.  ChiSox RHSP Dylan Cease and Toronto RHSP Alek Manoah. , who were 2nd and 3rd respectively.  These were the first CY votes received by either pitcher.

Verlander will try to bankroll his dominating season into a record breaking contract.  This downside of his quest is that he will entering his 40 year old season.  He talks about wanting to pitch to 45, but talking about it, and believing he can accomplish that at a championship level is something else.

Congratulations to both Sandy Alcantara and Justin Verlander.

Why do people suspect Barry Bonds of using PEDs but not Judge? Why suspect Clemens but not Verlander? Don’t get me wrong, I’m not accusing Judge, he’s a young player that mught be naturally phenomenal. But who would ever believe a 39 yr old pitcher could have TJ surgery and immediately dominate the league?

I’m not at all surprised

Sorry, I got called away and didn’t proofread that post.

One more thought. Bellinger. In the world I live in, which is a few levels below the penthouses in which these folks live, Bellinger would accept the contract that he has earned. He’s already been overpaid so why would the Dodgers do that again? Well, they don’t live in the world which I live, therefore I fully expect him to get overpaid by someone. NY maybe. Perhaps Chicago. We won without him last year, we could do it again. Will we? How the hell do any of us know? All we can do is speculate while we wait. I would prefer a contract that at the end of the year he is paid what he has earned. Set it at $8 million per WAR. You get a million a month to get by on, sounds ridiculous I know, then at the end of the year it’s quite possible you will be paid more than anyone in baseball. And yes, I currently live in Fantasyland.

That land of yours also doesn’t have a Player’s Union it seems.

It’s Fantasyland. Everyone works together for the common good.

This will sound funny, but we have the same fantasies!

I think I know what you mean by that Bluto. A whole-system perspective is lacking in many. Happy to hear you share the vision.

Bluto was speaking of the Players Union, and there has been some interesting news about potential MLBPA action on the FA front. MLBPA is looking into a potential collusion situation regarding Aaron Judge and NYY and NYM. The issue comes from an Andy Martino article in SNY where he intimated that NYM will not likely pursue Aaron Judge because of mutual respect between NYM, Steve Cohen, and NYY, Hal Steinbrenner. Specifically what Martino wrote:

“Talking to Mets people about this all through the year, the team in Queens sees Judge as a Yankee, uniquely tailored to be an icon in their uniform, stadium and branding efforts. Owners Steve Cohen and Hal Steinbrenner enjoy a mutually respectful relationship, and do not expect to upend that with a high-profile bidding war. The only way people involved can see the Mets changing course and pursuing Judge would be if the Yankees somehow declared themselves totally out of the bidding.”

A second issue involves Houston owner Jim Crane and comments he made about Justin Verlander. Crane apparently stated on record”:

“He’s looking at the comp, which I think there’s only one or two. … J.V.’s probably got a few years left, and he wants to make the most of it. I think he’s going to test the market on that.”

The complaint here is that the Union may be looking at whether Crane was comparing Verlander’s market to a specific player. Also apparently, team executives making specific market comparisons of an unsigned FA are verboten. The belief here was that Crane was referring to the Max Scherzer deal of last year.  Well, Duh!! But he never made that direct comparison.

If the Union does indeed file a grievance on either player they have to demonstrate that either player (Judge or JV) were harmed by the disclosure. Does anyone seriously believe that Judge’s market will be harmed by NYM not bidding on him? Or does anyone not believe that JV will be looking at a Max Scherzer contract without a Jim Crane comment, or that will preclude any team from not entering into negotiations? JV already has a limited market anyway.

In fairness, the MLBPA partially has themselves to blame for their refusal to set salary caps. BTW, I agree with the no salary cap stance. But don’t limit the market and then complain about it. The top FA’s price themselves out of all but 10 teams because of the salary structure. There is no collusion here. Has the MLBPA seen the FA deals for relievers thus far, a week into the FA “frenzy”? Plus, last year, TA got 1 year at $8M; this year 3 years at $39MM. The market is doing fine. And Judge and JV will get theirs.

Last year the Dodgers had only two starting pitchers that were uninjured for the entire season. One of those was Julio Urías, and the other was Tyler Anderson. Now that the Dodgers were not willing to go more than 3 years and $39MM for TA, that leaves the Dodgers with one pitcher who made it through the season uninjured.

The team is down to 4 ML starters, plus 2 MiLB starters who started games last year (Ryan Pepiot and Michael Grove), and 2 more SP who are not ready for prime time (Bobby Miller and Gavin Stone). Miller and Stone are not on the 40 man, but that is not an issue. They also have long reliever journeyman #6 starter in Andre Jackson. So that is 9 starters that the Dodgers can call on. Last year the Dodgers had 10 starting pitchers start at least 6 games, plus two openers (Ferguson and Graterol).

IMO, they are going to need to find additional starting pitchers. 7 pitchers who have started ML games is just not going to be enough, especially when you cannot count on a full season of health from 3 of the top 4. The baseball player personnel execs with LAD kept telling us that they had enough starting pitching for the last two years, and we know that there was not enough starting pitching for the playoffs either year. Will 2023 be different? Keith Law says the Dodgers will be fine, so we fans should now feel confident that we can look forward to a solid starting rotation with plenty of quality depth for a full 162 game season and the playoff run.

BTW, I am hopeful that the additions will not come from the Michael Wacha and Seth Lugo bin of starting pitchers. Of course there is always Jimmy Nelson and Danny Duffy.

Fabian A at the Athletic kinda (but not as glowingly) echoes Mr. Law:

They should remain in touch with Heaney’s reps throughout his free agency, but Heaney likely won’t be atop their priority list. Their success with the left-hander is a proof of concept of a plan they’ve been able to execute well If Heaney signs elsewhere, the Dodgers have shown the ability to do it again with another Heaney type.…

When the team needed a starter, Heaney ended up in the bullpen in the NLDS. They need more than a Heaney type.

The Athletic just said a poll of MLB people said Dodgers would not sign Verlander and instead sign Correa.

Now you’ve ruined it for all of us, Fred. That’s like telling someone the ending of a mystery novel when they’re on chapter one.

The Dodgers ended with 4 players with MVP votes:

Urias won 20 games in 2021, placed 3rd in Cy Young in 2022, and could actually win the Cy in his last year entering free agency. He is going to be in strong free agency demand.

I’ve often wondered what kind of career Urias would have. He’s had already had a few surgeries, he has never looked fit (there have been more than a few great players who never looked fit) and to me it always looks like he’s working too hard. Does any of that mean he will have a short career? Probably not. Unless it does of course.

A poll of MLB people. Well, they should know.

I first thought the Dodgers would want to make a splash, if for no other reason than to clear the stink in the air left by the dump they took in San Diego. Now I’m not so sure. They could do nothing and still be favored to win the West, and that is the goal every year, right?