Is It A Day or A Turning Point 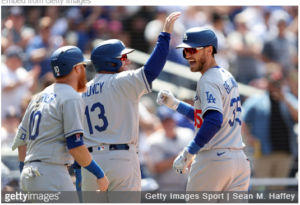 Leave it to us arm chair managers/GMs to recognize that we just are not as smart as we think we are.  Well at least for one game, and one game against Cincinnati.  But the three guys that have been criticized the longest and loudest this year had great days: Max Muncy, Justin Turner, and Cody Bellinger.

Today the Dodgers scored 10 runs on 16 hits.  FIVE HRs. For the series, 26 runs, and 42 hits. That is unquestionably a series to remember. The one negative on the day was Phil Bickford and his lack of command of his fastball that just got hit hard, and absolutely crushed by Tommy Pham.  Otherwise the bullpen was outstanding all series.  One blemish on the bullpen for the series, is not that hard to take.

To be somewhat fair to me (I am allowed, it is my blog😍), I have never been an advocate for keeping Belli on the bench.  He has always been too valuable defensively and with his baserunning.  And it is not like Belli has not had some solid days (although all too infrequently) with the bat this year.    I did say that Belli should move down the lineup.  Sure enough he drops to #8, and he has the best day at the plate all year.  Yes, he has had a couple of three hit days, but not like today.  Today was special.  3-3, HR, 3 RBI’s, 3 runs scored, a sac fly, and a stolen base.  I especially liked his last single to the left side that he beat out.

Next…JT.  I also did not ever believe he should be benched.  More time off?  Sure.  Did I think he was hitting the Chase Utley wall?  Yes, and still do.   Today, JT drank from the Fountain of Youth, both offensively and defensively.  Three hits including two doubles.  One of these days, one of those balls that bang of the top of the wall will find its way over it. His defense was huge today.  3-4 spectacular defensive web gems.

Doc said he was going to leave Muncy in the #4 spot because he knew at some point Muncy would figure it out, and Doc wanted Max in the #4 spot when he did.  I don’t know about that.  He did not feel the same with JT or Belli when he moved them down.  Why Max?  Doc and the entire LAD brain trust collaborate on the lineup based on a gazillion algorithms.  Who am I to disagree?

It matters not, because Max had his best game of year.  He was not only productive offensively, but he was also stellar defensively.  Max had three hits including a MONSTER HR.  The defensive play he made on Jonathan India was spectacular.

Admittedly, I have been hardest on Max.  I am not about to claim that this game is the turning point in the season for Max, any of the three.  It was against Cincinnati, on a sunny day with the wind blowing out in RF.  The Reds are 30th in team ERA in MLB, 30th in reliever ERA, and 29th in starter ERA.  They are 27th in team WHIP, and they have given up the 3rd most HRs on the year.  So it is certainly something to celebrate, but not something that is predictive of the next series, much less the rest of the season.  Let’s enjoy the day, and worry about tomorrow…well, tomorrow.

By the way, the Dodgers and Reds could be big trade partners if they so desire.  The Dodgers have a lot of pitching talent, and they cannot use it all.  Of course the Dodgers will be interested in Tyler Mahle and Luis Castillo (as will a dozen other teams).  Two other players that I think would interest the Dodgers are Brandon Drury and Donovan Solano.  They can both play anywhere, and they hit LHP well.  They will both be moved at the deadline, as they will produce a decent return for a rental.

LAD 5 HRs on the day

He deserves his own.

The good day continued with both the Giants and the Padres losing.  The Dodgers now lead San Diego by a game and the Giants by 5.5.

I was leading the Solano fan club last winter and was really hoping we’d sign him. Would love to see him come at the deadline but it seems to me that’s just duplication with Alberto. I doubt it happens.

Braves are a good team. Better than when the Dodgers faced them early in the year. So this will be a good test of just how good our starting pitching is.

And how good the bullpen is as well.

Great. Great. Great article on Nastrini. How he overcame the YIPS and how the Dodgers are (unsurprisingly) bullish on him:

Now there goes one of my posts. 🙂🙂 It is a great read. And it really typifies who John Savage is. Absolutely one of my favorite baseball people. How I hate it that he is a Bruin. 😊😊

Now maybe people will understand why I always had Nastrini above Bruns. Nastrini and Heubeck are my two favorite from that draft, by a healthy margin.

That’s interesting. There’s nary a mention of Bruns in the article. What leads you in that direction?

Also, what do you think of Sheehan and Kopp? Both are getting a lot of favorable buzz.

Neither one are starter candidates (IMHO). If Kopp can harness his control, I do think he can be a MLB late inning high leverage reliever. With Emmet Sheehan he is young in High A, but he has Multi-Inning Reliever written all over. He has not been very good starting, but his last two appearances he has followed Carlos Duran and pitched well in 3.0 IP and then 2.0 IP. Carlos Duran is the sleeper starting candidate down the road. But Carlos’ floor is definitely late inning high leverage reliever, potential closer.

In lousy news, Heaney has gone back on the IL with the same should problem he just came back from. I don’t think we can count on him for the rest of the year (my opinion, not the Dodger medical staff).

This is a huge opportunity for White, if he can take advantage of it.

I agree with your opinion. His shoulder is not going to magically get better without significant rest. I agree that White is the logical choice, but Reyes Moronta was recalled. I do believe that White was scheduled to pitch tonight for OKC, but Jon Duplantier is now scheduled. White is probably with the team and could draw the start in Atlanta on Saturday. They could use the extra reliever for today, so Moronta is recalled. If I am right someone gets optioned for Saturday to make room for White.

That was my first guess as well.

My son tells me he read (I forgot to ask him where) that Ferguson was not happy that he was put on the IL. Felt he could have pitched through the arm thing. Also wasn’t happy he was kept at OKC for so long.

I think the front office is being very careful with him because, in my view, he’s one of the leading candidates to be our closer next year if we don’t trade for one this August or winter.

We certainly aren’t going to bring back Kimbrel. I think management would still much rather use Treinen in high leverage rather than simply appoint him closer.

I do expect AF to get a closer type at the deadline just to back up Kimbrel. No idea who it might be, but I would doubt he’d spend the prospect capital on Bednar. It might just be someone whose contract expires this year and won’t cost a top 10 prospect.

Caleb apparently spoke on the record with Jack Harris (LA Times). It did not sound positive. Here is a post from Eric Stephen on that subject.

Dont bitch to the media. Management does not like that.

Nastrini huh. Ok. If you say so. Not very impressive so far. I’ll take Duran as my fast riser. Said the same thing about Outman and appears to be stuck.

Duran is a good one. He is going to get stretched to be a starter, but he is destined for the back end of the bullpen. His stuff is electric.

Harkening back to a conversation we had.

I think we’ve been better of late. Taylor chased strike 3 with the bases loaded, Muncy chased strike 3, as Trea just did. And yeah, the Braves will swing at anything, and often hit it.

Daniel Hudson is out on what appears to be a not so minor knee injury. Pitchers are dropping like flies.

I know there are the Lux haters out there, but he is looking very good at 2B. Some want to only remember his 2020 defense. He and Trea Turner are becoming quite a good DP combo.

I think when the time comes we will need more than a one inning pitcher, but, yeah, let’s see it.