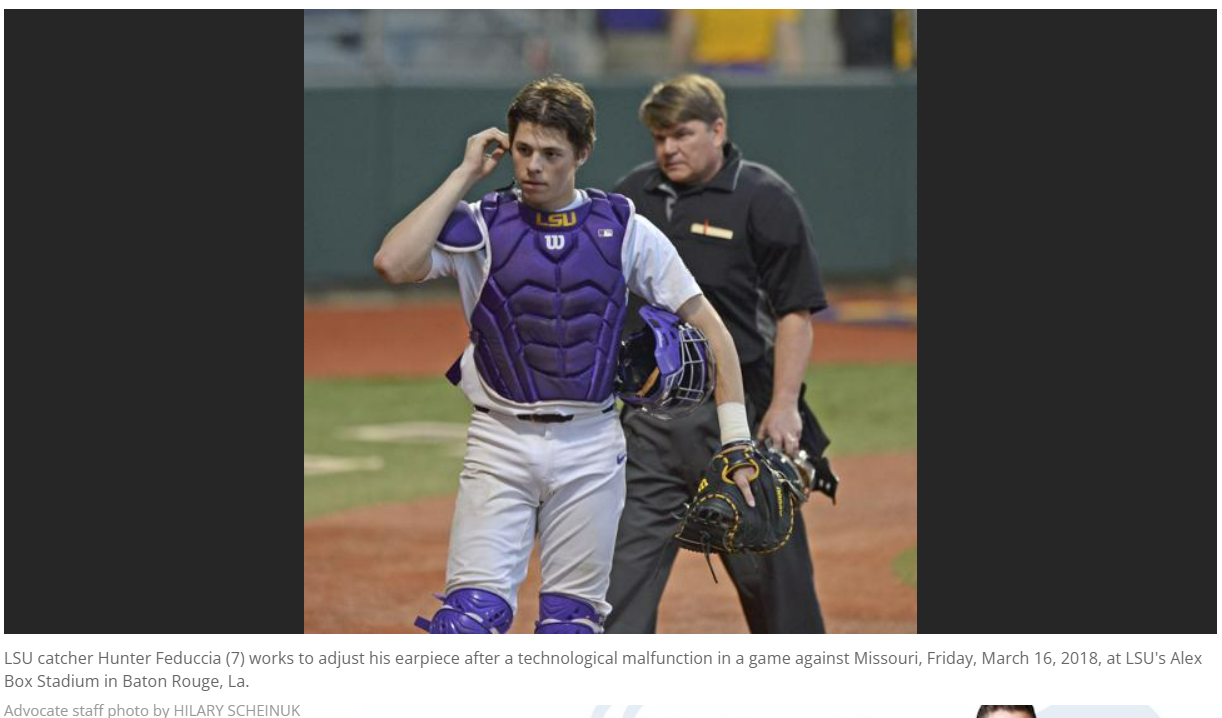 I was reading MLBTradeRumors and saw that Tyler Stephenson (Reds catcher), who just returned from the IL with a broken thumb, has now broken his clavicle.  Both injuries were incurred on foul balls.  This is actually the third stint on the IL for Stephenson this season.

It’s funny how my brain sometimes works.  Now the Reds need a good backup catcher to come in when Stephenson cannot.  Chris Okey (recently DFA’d), Michael Papierski, and Mark Kolozsvary are the three youngish ones after Aramis Garcia.  The Reds might be looking for a lottery ticket and potential backup upgrade here.

The Dodgers have a boatload of young catchers and just this past weekend drafted another catcher, Dalton Rushing (Louisville).

But most keep forgetting about Hunter Feduccia, and I think that is regrettable.  He is not considered a top prospect by any publication.  He wasn’t even included in the top 51 by FanGraphs, while all but Quiroz on the above list were.  But Hunter Feduccia is not a quitter.  All he has done while playing in the LAD system is play well.  He has climbed all the way to AAA and is playing well in that arena.

Feduccia is something of a late bloomer. He didn’t start until his final season at Barbe High School’s powerhouse program in Lake Charles, Louisiana.  In that senior season at Barbe, he batted .353, earning all-district recognition.

After signing with LSU, Feduccia enjoyed an excellent summer in the Northwoods League at the plate while playing outstanding defense.  He played for the Rockford (Ill.) Rivets and batted .348 (64-for-184) with 18 doubles, one triple, seven homers, 41 RBI and 43 runs.  He was voted the No. 4 pro prospect in the 2017 Northwoods League by Baseball America.

This was not at all a surprise to his LSU Eunice coach, Jeff Willis, who said:

“I thought last year he was the best catcher in junior college baseball, not just from the catching standpoint, but he supplies a power bat in the middle of somebody’s lineup,” Willis said. “To be able to get the combination of those two things is very rare in that position.”

Now he was enrolled at LSU ready to fulfill his dream.  Feduccia did not get to showcase his talents in his one year at LSU, because he too was hit by the injury bug.  Before the season started, Feduccia was struck on the mitt by one of his teammates on a follow thru swing that broke a bone in his glove hand.  After returning, he was struck by a foul ball hit by a Texas A&M batter and broke a bone in his throwing hand.  It was a tough start to a year that he was supposed to get noticed for a high draft pick out of LSU.  Feduccia did not miss much time out of the lineup with either injury.  This would seem to indicate that he was very important part of the LSU Tigers lineup.  But after those two broken hands, he never got untracked.

At LSU, he appeared in 56 games (48 starts at catcher), batting .233 with 10 doubles, one triple, three homers, 31 RBI and 22 runs.Per a January 2018 article from the Advocate, LSU Coach Paul Mainieri had this to say about Feduccia.

“I don’t even know if Hunter Feduccia realizes just how good a ball player he’s capable of being,” Mainieri said. “He can really be an outstanding player if we can just get him to shift it into another gear. Just to give a little bit more and give a little bit more focus and intensity. I think the kid could be a tremendous all-around ball player that could really do a lot in his post LSU days, as well.”

Mainieri also spoke of his plate covering ability with the bat.

After his junior season at LSU, Feduccia was drafted in the 12th round in the 2018 draft by the Los Angeles Dodgers.  After signing with LAD, he was assigned to Ogden (College Rookie League).  After 3 games and 8 ABs, Feduccia was promoted to Great Lakes (Low A at the time).

He lost a full year in 2020 as he was not part of the 60 man roster the Dodgers had.  Their five catchers were:

Just as previous coaches had predicted, Feduccia’s power potential would start to blossom as he got older.  Prior to this year, Feduccia had 14 HRs in 3 years. He already has 11 thus far this year.  While his power numbers mount, so will his star begin to rise.

He will never be a top prospect, but could he be another late bloomer like Jacob Stallings or Austin Nola?  Nola did not reach ML until he was 29, while Stallings was 29 before he reached 75 PAs.

With Smith and Barnes with LAD at least through 2024, and the fact that LAD will have at least one former ML catcher at AAA for emergency, Feduccia is probably blocked to ascend to LAD.  Feduccia is already Rule 5 eligible, but with the number of players that will need to be protected this winter, it might behoove AF/BG to move Feduccia or risk losing him in December.  Maybe Feduccia and Zach McKinstry can both be traded so that we can see how they could both grow into at least semi-regulars with another club. 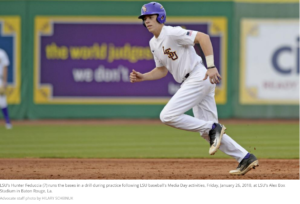 Mookie, Trea, and Freddie continue to dominate with HRs.  Gavin Lux gets another 2 out run scoring triple.

Mookie Betts 200th career home run puts the Dodgers on the board first against the hated ones. #TrueDodgerpic.twitter.com/YQN2waJYUM

Stop me if you’ve heard this before. Trea Turner has a 10-game hitting streak.pic.twitter.com/gzhFk6VcLv

Gavin Lux has been peppering the right field corner for triples.pic.twitter.com/mZKcuPHNiV

The Dodgers needed all four runs with their perilous bullpen imploding yet again.  In the three games, the starting pitchers:

The Bullpen – 10.0 IP, 8 runs.  Other than Caleb Ferguson and Evan Phillips, I do not have confidence in any of the other relievers.

Yet they keep winning.

Borrowed
Even with the home run Friday, Bellinger is hitting .196/.239/.314 in 109 plate appearances this year against left-handed pitchers. Among the 284 major league hitters with at least 50 PA against southpaws this season, Bellinger’s 56 wRC+ against them ranks tied for 244th.

Maybe Bellinger is a platoon player. Trace could be a candidate. Taylor too.

How about Almonte? No trust?

Thank you. I should have included Yency Almonte.

We can hope that those returning from the IL will fix the late inning leaks.

I fear Feduccia will be lost in the minor league sea. I think it’s easy to see he could be a useful reserve catcher for some team, but who might know it? It’s not a name you read about much. And I wonder if every organization has players like him. I guess we’ll see in the next week or so.

I thought we might see Vargas when Turner went down. Nope. Just more of Muncy. Any time Max.

I keep hoping, there it is again, that Bellinger will light it up. He’s making contact more often. That’s a good thing. What this team would look like with both Bellinger and Muncy hitting.

Great write up Jeff. Had heard of him, but did not know how he was doing.

I still think, with the schedule being what it has been and what is now (18 game stretch) a 6 man rotation when (if) Heaney comes back, would greatly benefit this staff.

Rumors say he will be back in the rotation this week, and the team will go to a 6 man rotation.

From where do these rumors originate?

One of the MLB sites. I cannot remember which. I actually saw it on a few sites but probably from the Sam source. I will see if I can find it when I get home.

LHP Andrew Heaney (left shoulder inflammation)
Expected return: July 27
Heaney, who began a rehab assignment on July 16 with Single-A Rancho Cucamonga, will likely start on July 27 against the Nationals, according to Dodgers manager Dave Roberts. The Dodgers, who play on 18 consecutive days to start the second half, will go with a six-man rotation during the stretch. (Last updated: July 24)

Well finally. I wonder how long they’ll stick with it.

If we actually go hard after Castillo, I could easily see Feduccia being included as one of the extra pieces. He has definitely increased his trade value this year and, as I mentioned yesterday, there is no way I see room for him on the 40-man this winter, so a trade would be best for all parties.

What franchises are in need of 4A catching depth?

The Reds for one. They just lost Tyler Stephenson to injury. There’s always a need for backup catchers at the major league level and depth in the minors. I’m not saying he’s the guy you build a trade around but he could be the final piece.

Is it a AAA bat and a major league glove that averages out to AAAA?

Another player that could be a major leaguer on another team is McKinstry. Rios might stick on a big club as well.

McKinstry could stick like Farmer did. Our 4A players would start in a few places, and Cincinnati is one of them.

He has near zero trade value STB

Are you referring to Feduccia? And I suppose the value you refer to is Trade Simulator.

And yes, he has near zero trade value by their numbers but that doesn’t mean the Reds wouldn’t be willing to take him along with 4 or 5 other guys for Castillo. Like I said, he wouldn’t be the piece you would build the trade around.

I see where Mookie has a value on the Simulator of -107 (negative 107) which I guess means that Feduccia is quite a bit more valuable than Mookie.

All kidding aside, it would be worthwhile to swap Feduccia for a guy who is 3 or 4 years younger (even someone with zero value) and who still has time before needing to be protected. My basic point was that we should try to get something for him rather than just dumping him for nothing.