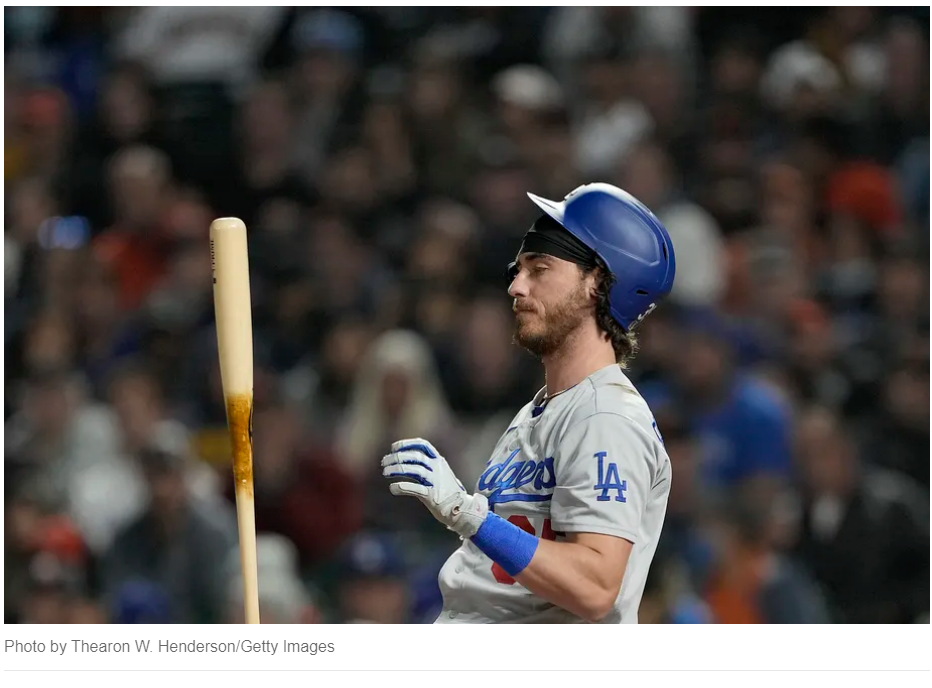 There is a commonly used phrase on another site…Progress is not Linear.  I could not agree more.  The problem with the statement is that while progress can improve at some point in the future (as implied), it is also true that progress can regress. Is that what Cody Bellinger has been doing since the second half of 2019?  His numbers certainly suggest that.  In 877 PA (768 AB), Cody’s slash line is .216/.308/.421/.728.

If AF signed a FA CF for $17MM with those numbers, most LAD fans would be screaming.  In reality, AF had no choice. Since his 2019 MVP season, his arbitration dollars have been sky high. However, his value is so low, there is no real trade market for that type of slugger at that price.  Of course they could have non-tendered him saving $17MM, but AF was not going to sell that low.  Let’s not forget that the 2019 season offensive production was buoyed by a juiced ball.  Did Belli benefit from the juiced ball?

The constant tinkering of his swing has not gone unnoticed. Bellinger has often changed his hand positioning, bat angle, and even his stance in the box slightly. Dodger Hitting Coach, Robert Van Scoyoc, added that those were often Bellinger’s decisions and not something they want to get in the way of.

“If he wants to experiment, he’s his own person and if he comes up with a thought, he has a right to try that. It’s his swing, his career, and we’ve got to be there to help and support him even if you don’t necessarily think that’s the right thing at that moment.”

“I think he’s working through where he was at in his peak season and where he’s at now and learning what he can and can’t do,” Van Scoyoc said. “He’s gotta find some things out. I think that’s what he’s going through. He’ll land on something he can compete with when the season starts. He’ll be in a good spot.”

Yes it is still Spring, and Spring numbers do not mean anything (or do they?).  Belli is going to get a lot of rope in the beginning, but he does need to produce to be considered a viable regular as the season progresses.  I still wear his jersey, so I am very hopeful.

Then there is Andrew Heaney.  The journeyman pitcher that every team thinks they can fix with a career ERA of 4.72, FIP of 4.45, and WHIP of 1.263.  In 2021, Heaney had the sixth-worst HR/9 (1.88) and sixth-worst ERA (5.48) among starters with at least 120 IP. He owns a career ERA+ of 90, meaning, he’s been a below league average pitcher. Of course AF thought so much of his pitching “fixit” team, that he gave Heaney a $8.5MM contract.  No other team would have offered half that.  He has been sparkling this ST proving the faith that AF has shown has not been wasted. In his two spring training appearances, Heaney has yielded ten earned runs in 5.1 IP. Really, AF could have just gone with Mitch White at the MLB minimum and got better results.  Or Andre Jackson.  No, instead AF gave $8.5MM to a pitcher with a live arm but no real history of success.

Perhaps Belli should face off against Heaney for one of them to feel success.

Unfortunately for those of us who place character above winning at all costs, Trevor Bauer is expected to be in the rotation at some point this season.  I would still rather have Mitch White and/or Andre Jackson have that spot, but AF is not going to spend $34MM (AAV) for a pitcher to not pitch.

While other team’s pitchers are stretching out, the Dodgers have trouble going more than 4.0 IP.  Clayton Kershaw got up to 4.0, but the newly acquired San Diego starter, Sean Manaea, pitched 5.1 IP on the same night.  Walker Buehler did go 4.2 in his first start (March 22) and 5.0 innings on Sunday.  Will 9.2 spring training IP be enough for Buehler to start a regular season game?  Walker is a notorious late starter.  Julio Urias went 4.0 innings in his second start, and got the ball for a April 4 ST start against LAA.

It sure looks like there are going to be a lot of “piggy-back” games for the Dodgers to begin the season.  This careful approach did not help to curtail the injuries in 2021.  Maybe 2022 will be better.

Pollock, Kimbrel, and Manaea – The Trade and the One That Got Away??
MiLB Matters by Harold Uhlman
wpDiscuz