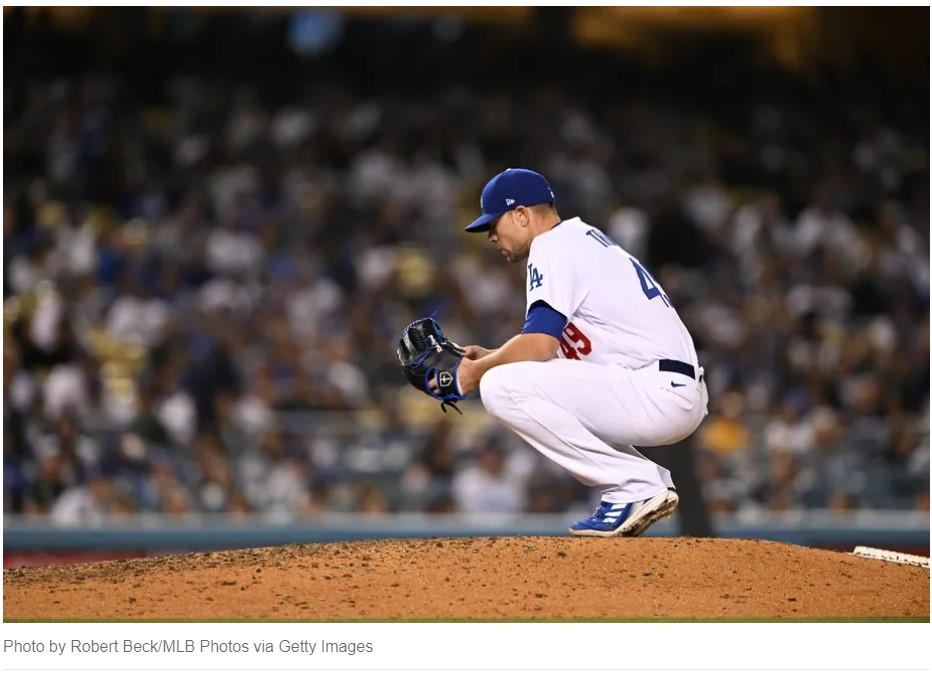 I am more than a little dismayed at the Blake Treinen situation.  He just underwent “right shoulder labrum and rotator cuff repair surgery.”  The surgery was performed by team physician Dr. Neal ElAttrache.  Blake is estimated to be out at least 10 months, which would push his return to about mid-September.

#Dodgers announced Blake Treinen had right shoulder labrum and rotator cuff repair surgery. Treinen told me he’s confident that he will pitch at some point in 2023 season. #DrElAtrache

Why am I dismayed?  This was the surgery that was recommended by Dr. ElAttrache back in April.  Blake chose a different procedure and was hoping to make it back before the end of the season.  He did return to appear in two games in September before returning to the IL, and then one game in the NLDS, where he gave up a monster HR to Jake Cronenworth.

Now we have learned that the initial procedure was ineffective and the surgery was necessary after all.  I am not upset with Treinen.  It is his body, and if he wants to take a less invasive approach to correct the injury, that is between him and his doctor.

I have more angst towards AF/BG.  Why did they not get a true diagnosis of the injury before agreeing to the 2023 extension and 2024 option?  Teams do not usually go thru extensions (or contracts in general) without checking the medicals.  Did they not know that Dr. ElAttrache had recommended surgery?  That fact may not have been reported to the public before the extension, but it had to be known to the LAD executives…right?

Andrew Friedman said if he was Blake Treinen's advisor, he would've recommended surgery.

Friedman explained a big reason #Dodgers signed Treinen to a contract extension was "to provide him the peace of mind to run out this course, which helps us this October" & have a fallback

The 2023 contract is $8MM lost.  I know that is chump change to the Dodgers, but it still carries a high AAV while the CBT threshold  is quickly approaching.

Now the glass half full guy in me says that AF/BG did in fact know that the surgery was recommended and that it would be completed shortly after the WS was due to end.  They would have known that 2023 was lost, but the 2024 option was structured based on games missed due to injury in 2023.  I have obviously not seen the contract, but reports estimate that the option will pay Treinen between $1MM and $7MM based on time missed.  The optimist in me says that the option will be $1MM, and that the overall contract will be for $9MM and 2 years.  If that is how it was analyzed, I am okay with that.  The Dodgers could in fact just decide to forego trying to reset in 2023 knowing full well that 2024 could be a better opportunity.

The Blake Treinen situation is a conundrum, but one which the Dodgers can easily navigate through, both financially and with regards to relievers on the roster.  He will go on the 60 day in ST, and the Dodgers will end up with another on the 40 man.

Andrew Heaney – It is reported that the Mets have interest in Andrew Heaney, probably due to the potential loss of 3 starters from last year: Jacob deGrom, Chris Bassitt, and Taijuan Walker.  Right now the Mets rotation is Max Scherzer, Carlos Carrasco, and David Peterson.  Thus on paper Andrew Heaney makes sense.  MLBTR estimates he will get a 3 year $42MM deal.  Kiley McDaniel is not nearly as generous as he estimates 2 years $20MM.  Ben Clemens at FanGraphs is even less generous at 1 year and $10MM.  I figure it will be somewhere between FanGraphs and MLBTR.

What also perplexes me is that Heaney was a train wreck with NYY and the NY crowd was brutal with him.  Is moving from the Bronx to Flushing Meadows going to make it less of an issue for Heaney?  If I were Heaney I would look to pitch in a less volatile arena.  I know he wants to pitch for a contender. Maybe Texas?  Especially if they are successful in getting deGrom.  White Sox?  Baltimore? Toronto? 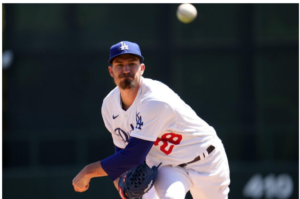 Finally, I have been out front with how much of a fan I am of Ross Stripling.  He has gone from a 6th man with LAD, and one who many if not most Dodger fans wanted to move out of town, to a pitcher looking to get a 2 to 3 year deal in FA for $20MM to $33MM depending on what publication you want to believe.  Regardless, he is going to cash in, and I could not be happier for him. 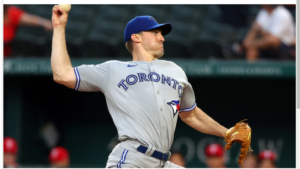 A number of teams have expressed interest in Heaney. I agree with your point about going back to NY and the same would hold for another of the interested teams, Boston.

On the other hand, Toronto is also interested and that might be a good landing spot for him. So, for that matter, would SF be with that large ballpark. I’m sure he’ll get at least two years and if there are enough interested teams, someone will give him a third year.

I’m thinking Stripling will probably be welcomed by the Rangers if he’d like to go home to Texas.

The Dodgers have supposedly shown interest in Senga, but I imagine the same could be said about 20 other teams. I wonder if AF has gotten to the stage with Anderson where they are just deciding if he’ll take the one year QO or stretch it out to maybe three years. If Andrew knows Anderson will be back and it’s just a matter of terms, he’ll have a lot less pressure to go out and get another top flight pitcher. On the other hand if Anderson plans to still talk to other teams, Andrew will also need to explore all his options.

Last edited 19 days ago by Singing the Blue
0
Reply

“to provide him the peace of mind to run out this course, which helps us this October & have a fallback”

Well, that’s nice. It takes $9 million to give this guy peace of mind?

Anderson and Senga would work. Bogaerts/Correa,Bellinger, Turner and away we go. Might not be enough but we can pick up help mid season.

Signing/returning Anderson and Senga, Bogaerts/Correa and Bellinger plus Turner would give me “peace of mind”.

Stripling could add good depth but another playoff quality pitcher is needed, either now or at the trade deadline.

I am not advocating the Dodgers sign Strip. I actually do not think he should be in their plans. The team has multiple back end of the rotation starters. I am just glad that he went from what so many considered to be a throw away to signing a multi year $10MM AAV deal. I agree with you, if the Dodgers add any pitching not named Clayton Kershaw or Tyler Anderson, it better be a solid #2 or better.

STB and AC said they were a little surprised Joc received a QO. They were in the majority for sure. I was as well.

Joc had a fantastic season with his hometown team. I just did not believe anyone would sign him for 1 year $20MM. He had signed for $13MM for the last two seasons combined. He would probably have signed for two years for $20MM with a 3rd year option. I do not know why he was short changed the last two years in salary, so I am glad he is getting paid this year. But he is going to need to put up a better fWAR than he did last year for the Giants to get value. As good as he was last year, his fWAR was 2.1 for a $16.4MM value.

But good for Joc. He is a good guy and deserves it.

He was downgraded because of his defensive stats. But he is a much better defensive player than those stats indicate.

They have a long way to go to be anything close to average. Only Kyle Schwarber and Jesse Winker are considered worse defensive OF. 685 innings in LF and 129 chances. It appears that SF was not a staunch supporter of Joc defensively in LF.

Be happy for Joc. $20MM for 1 year is just not supportable except for SFG. Good for Joc.

I read that Joc was in line for a two or three year contract ranging from $20M to $30M depending on the years. The Giants figured they would have to pay Joc $16M to sign him for 2013 and that was close enough to a QO that they decided to give it to him and reduce the chance he would bolt.

I have already said I was happy for Joc but just the same, thanks for the advice Dad. Regarding his stats, yes they are bad but they mostly represent his lack of speed and not his ability to catch anything he can get to. With Schwarber everybody holds their breath when a ball is hit to him. Not so with Joc.

Relievers are flying off the shelf. I was never an advocate for Edwin Díaz, but two late inning high leverage RHRP I was hoping the Dodgers would check in on were the Padres’ Robert Suarez and the Astros’ Rafael Montero. Suarez got a 5 year $46MM deal while Montero re-signed for 3 years and $34.5MM. Those are aggressive deals.

I’d love to see us bring back both Martin and Kahnle, but they just got more expensive, possibly beyond what Andrew is willing to spend.

Neither of them had the years that Montero and Suarez had but they have longer track records.

I was thinking the exact same thing. Martin and Kahnle maybe just got too expensive. The one hope for CMart is that he will be 37 next year and cannot expect anything more than a 2 year deal. MLBTR has him at 2 years $14MM. After what Montero and Suarez got, I think that may be light. They had Montero at 3 years $24MM.

Cubs reportedly interested in Bellinger should he become available.

Let’s say “should he become available by being non-tendered”.
They aren’t likely to trade for him unless AF picks up a major chunk of his salary in arbitration.

Major depending on the return?

Are you thinking that maybe we pay Belli’s entire salary and they send us back Nico Hoerner? ﻿ 😎 ﻿

I wouldn’t want to pay Nico $23M which would be his net cost approximately next year so no.

They are going to have to wait until next Friday to see if he is tendered or non-tendered. The Cubs interest in Belli will go down if he makes anywhere close to $18MM. If he is non-tendered, there will be a lot of interest in Cody Bellinger.

Do you think if we non-tendered him for the purpose of re-negotiating at a lower amount that he would be pissed off enough to sign somewhere else, even for the same money we offered?

I do think if he is non-tendered he will sign elsewhere. Scott Boras will look for a fit. If NYY does not re-sign Anthony Rizzo, Belli could slide in nicely as a LHH bat in that lineup. Even if they sign Rizzo, NYY is still a logical landing spot for Belli. But $$$ will dictate. Boras will find someone to ante up. He always does. Maybe even Texas.

The players know baseball is a business and Bellinger knows he has been overpaid for the last two years. Therefore, I think the Dodgers have as good of a chance to sign Bellinger as a free agent as any other team.

An Initial Look at the LAD Current Payroll Situation
Some Thoughts
wpDiscuz
22
0
Would love your thoughts, please comment.x
()
x
| Reply