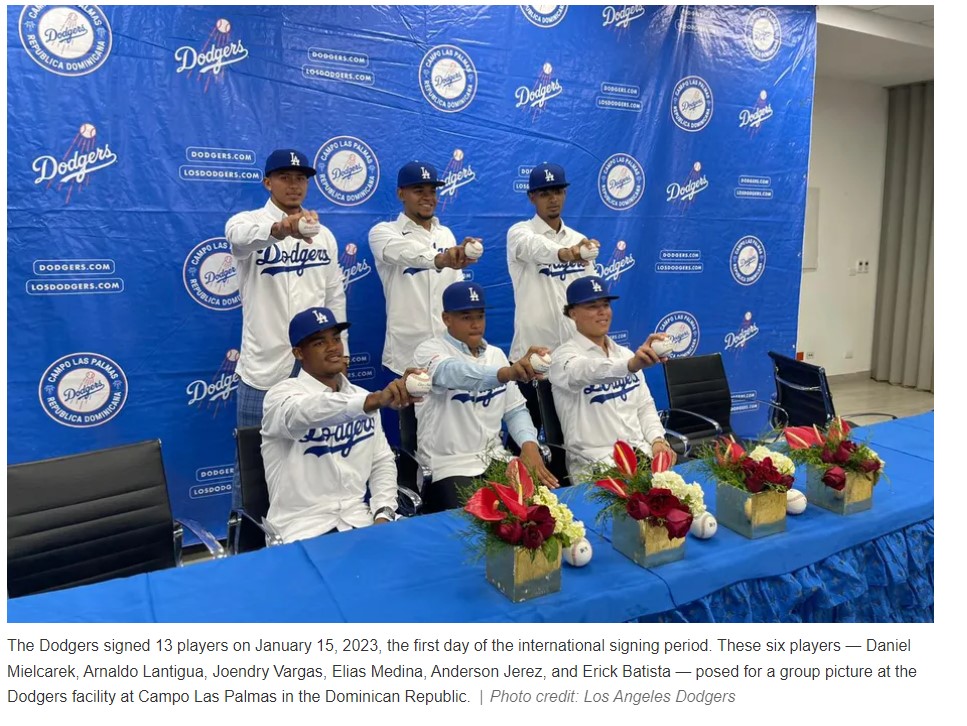 As a follow up, the first day of the International Free Agent Signing period resulted in 13 reported signings.  Also as a follow up to saxfan’s comment yesterday on the plight of Dominican vs Venezuelan prospects, the Dodgers stayed true en masse.  I think that the LAD international scouting team focuses solely in two countries: Venezuela and Dominican Republic.

The Dodgers have reportedly signed 13 international prospects: 6 from the Dominican Republic and 7 from Venezuela. They concentrated on the Dominican early with 3 top picks and 6 of their top 7, and filled in with Venezuela prospects.

Per Jesse Sanchez (mlb.com) and/or Ben Badler (Baseball America), the signing bonuses of the top three prospects are as follows:

The Dodgers have $964,000 for their remaining class.  Per Ben Badler and Baseball America, the remaining prospects signed:

That is 6 RHP, 5 shortstops, 1 outfielder, and the proverbial 1 Venezuelan catcher, Eduardo Quintero.  I believe in their LLC Operating Agreement, the Dodgers have to sign at least one catcher from Venezuela every year.  Too bad it wasn’t Ethan Salas for 2023.  Salas signed for more than $1.5MM than the entire LAD bonus pool.  Will anyone be surprised when Salas becomes the everyday catcher at 20, while Diego Cartaya is projected to be the DH in 2026 (per Baseball America)?

Even LF/RF are sparce.  Andy Pages is dropping and José Ramos was not protected and not picked up.  He can punish fastballs, but gets screwed into the ground from his swings on breaking balls.  Both are still young, but not developing as projected.  Pages stalled at Tulsa and Ramos stalled at Great Lakes.  Of course there is still time for both, and both showed some growth in the AFL, principally Pages.  Pages should start at AAA while Ramos should start at AA.

We will learn more about the prospect bonuses signed for as the days move forward.

Badger’s comment reminded me to review my RHP numbers.  As an update on my 77 RHP prospects, I decided to see just how close I was.  In reviewing FanGraphs’ Roster Resource and the two DSL rosters from 2022, the Dodger MiLB RHP prospects totaled 88 before the just completed IFA signing.  Thus, before any more waiver wire additions, the Dodgers are actually at 94 RHP prospects (27 LHP).  So I really was not exaggerating, but rather understating the number.

I know…you can never have enough pitching.  But maybe you can have more than you need when you do not have a SS, a CF, a 3B in the pipeline.  But boy are they stacked with utility players.  Not to mention their DH prospects.

In other news…MLB Pipeline is updating their prospect lists.  The first list to be updated is RHP as revealed by Sam Dykstra.  The Dodgers have two on the top 10 RHP list…Bobby Miller (#6) and Gavin Stone (#10).  Stone has made a mercurial rise up the prospect rankings.  There is no doubt in my mind that both will be making starts for LAD this year.  Will they establish themselves as starters???

Cleveland (Daniel Espino #4 and Gavin Williams #7) and Philadelphia (Andrew Painter #1 and Mick Abel #9) also had two on the list.  The other four top ten: 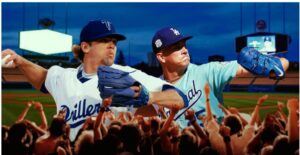 The Dodgers have signed another left hand hitting AAAA OF, Anderson Miller (29 years old). He can (and has) played all three OF positions (mostly LF). He was a 3rd round pick in the 2015 MLB draft by KC. He has never reached MLB, and spent all of 2022 in Independent League. Not knowing the contract terms for Bradley Zimmer or Steven Duggar, and whether they need to be added to the 26 man by a certain date or released, the Dodgers may be looking for additional organizational depth.

He went to school at Western Kentucky, and played his Independent ball in Kentucky. I have to believe that LAD super scout Marty Lamb was asked about him.

So happy to share that I’ve signed with the @dodgers organization!

I’m so thankful & excited for this opportunity. Next stop, Spring Training! 🌵 pic.twitter.com/YvXe4NxsqP

2. The Dodgers have the most productive group of Top 10 Prospects
Based on a tally of players’ estimated wins above replacement in the minor leagues, Dodgers Top 10 Prospects produced 32 WAR, more than any other system.
This makes intuitive sense when you factor the Dodgers’ player development track record and simply the experience level of Los Angeles’ Top 10. With an average age of about 22.5 years old, the Dodgers had the second-oldest Top 10.
Now, these WAR totals should be regarded as estimates of player value. I calculated crude WAR values for position players’ batting contributions—with no fielding component—and pitchers’ contributions scaled to strikeout, walk and home run rates—better known as fielding-independent pitching or FIP.
The Dodgers have at least six Top 100 Prospects, but Triple-A outfielder James Outman, the system’s No. 10 prospect, was actually the top performer in 2022 with 5.2 WAR. Other Dodgers WAR standouts by my method were Gavin Stone (4.2), Miguel Vargas (3.8), Michael Busch (3.8), Diego Cartaya (3.7) and Bobby Miller (2.8).
The Orioles’ Top 10 finished second with 30.2 WAR, followed by the Rays (26.8), Yankees (26.2) and Reds (24.6). In Cincinnati’s case, a lot of that WAR was compiled in other organizations. More on that later.

Adding together the BA Grades for Henderson and Rodriguez, after accounting for risk adjustment, yields a score of 125, which is higher than any other organization’s top batter-pitcher combo.
Two other duos scored 110 for adjusted BA Grade total: the D-backs’ Corbin Carroll and Brandon Pfaadt and the Dodgers’ Diego Cartaya and Bobby Miller.

We have a bounty of usable talent in our top 12-15. Future everyday studs like Vargas, Cartaya, Busch & Pages figure to be mixed in to the lineup within the next two years. Imperfect prospects like Outman, Ramos & Vivas all have tools that make either potential major league pieces or attractive trade chips. High end arms Miller, Stone, Pepiot, Nastrini, Sheehan & Frasso each has seen at least AA. And Rushing and Bruns have extremely high ceilings.

I am sure glad you know about this stuff Jefe. I have no clue about the international player market. I have been watching some winter baseball on MLB.TV. I just cannot understand what the announcers are saying. I did see Reyes Moronta pitch one time. Hasn’t lost a pound!

I don’t know much about these guys either. I know this activity creates a lot of buzz. Only a few players will rise to stardom but obviously most won’t. I’m excited about a new shortstop. Hope he’s the real deal. It will take years to know.

Predictions abound. One I found very interesting was fangraphs fWAR team predictions for the NL West. San Diego 52.3, LA 42.1. How does that translate to actual wins? It doesn’t. I have both teams with 95.5 wins.

I was in Vegas a month ago, and the Dodgers over under win total at Venetian sports book was 101.5.

My head said bet the under, but of course I can’t bet against us, so I left. I was shocked it was that high.

It’s the money coming in that sets that number. I would think it would adjust down as we get closer to the season.

I’m curious what others think about Fangraphs team fWAR projections.

Oh of course. LA teams, especially Dodgers and Lakers, always have skewed odds because our fans show up, get drunk, and then bet on their teams.

I have a tough time believing that the Dodgers who have been 1st or 2nd in team ERA and Starting ERA for the last 6 years, will all of a sudden drop to 14th in ERA.

Let’s look at just the starting pitching ERA and MLB ranking for the last 6 years:

FanGraphs projects the LAD starting pitching ERA for 2023 to be 4.12. That does not even pass the smell test.

Some of the incredulous individual projections.

I could go on, but please Alex Cobb 3.4 projected fWAR vs Julio Urías 2.8 projected fWAR? And we are supposed to believe these projections?

San Diego RF has a 1.4 fWAR advantage over LAD RF fWAR. Why? Because they put both Fernando Tatis Jr. and Juan Soto in RF.

I just read the article again, January 12th, Athletic Staff on the by line, Dodgers 42.1 fWAR, 8th in the league. Didn’t seem out of line to me. Misprint?

Dodgers have a lot of unknowns. Gonsolin, May, Kershaw. If they all get 25-30 starts, yeah, team ERA should be outstanding. They won’t get that many starts. Syndergaard. How good will he be? We will see some young starters. Will they be good? Nobody knows. We will likely see waiver wire guys given shots.

San Diego’s lineup is stacked. If they all hit, they are gonna score a lot of runs.

I went to the source, FanGraphs, for their projections. https://www.fangraphs.com/depthcharts.aspx?position=Team. This gets updated all the time. I am not sure where the disconnect is. Regardless, I am not a big fan of fWAR projections. That is just me. Others can (and do) disagree.

I think you may be underselling the Dodgers offense a bit. The Dodgers scored 142 more runs last year than the Padres. They did lose Trea Turner, and that is big. But I do beleive whoever replaces Belli will have a more productive year offensively. I also expect LF to be better offensively. Last year too many games in LF by Gallo, Pillar, Lamb, Alvarez, Lux, and an injured CT3. JT’s offense will be offset by JD Martinez. And like you, I expect Max Muncy to have a much better year. I do not think Vargas will disappoint. A healthy Lux could duplicate what he did before his injury last year. I do not expect them to score 847 runs. But they will be near the top of the teams in runs scored.

I do not care how many innings any of the named starters pitch. There is no way they will have a team starting pitching ERA north of 4.00. Blake Snell has not pitched more than 128 innings since 2018. Outside of Darvish, Musgrove, and Snell, the Padres do not have any proven (or near proven) starting pitcher. They have 3 relievers who are slated to start. Nick Martinez, Seth Lugo, and Adrián Morejón. They have zero depth.

Yes, the Dodgers have questions, but so do the Padres. The Dodgers have a far better farm system to make changes at the deadline. And there could still be changes to be made before the season. IMO, the team with the least number of questions in the NL is the Atlanta Braves.

I read projections, just like everyone else does. I’ve had a pretty good feel for how things would go over the years, but in all honesty I’m not keeping up with it like I usta did. I think it’s safe to say Atlanta, St Louis, LA and SD, along with Philly and NY are teams to watch. I won’t bet on the Dodgers but I won’t bet against them either.

This year, and for that matter last year, just seems like the continuous running of a bizarre tv show, The Sour of Bauer Hour. I think maybe some distance needs to put between the team and that decision before it can smoothly go better. Of course I am prepared to be wrong about that.

In the mean time I live between LA and SD so I can follow both shows from my recliner. SD could be fun to watch if they can tone down the show boating.