Besides the LAD NL West clinching victory, the High A Dodger affiliate, Great Lakes Loons, started their playoff game.  They were the away team facing off against the Cleveland Guardians affiliate,  Lake County Captains.  Behind some solid pitching of River Ryan (win) and Ben Harris with the save, and the hitting of Damon Keith, Eddys Leonard, and a key clutch bases loaded single by Dalton Rushing for his first A+ hit, the Loons prevailed 7-2.

The two teams will now head to Great Lakes for Game 2 of the Division Series Championship.  If they win on Thursday, they move on to the Midwest League Championship series.  Adolfo Ramirez (1-0, 1.46 ERA in the regular season) toes the rubber for the Loons, opposing fellow righty Tommy Mace (1-5, 4.55 ERA) for Lake County.

For a detailed game recap:

Nick Frasso pitched a fantastic 4.0 scoreless innings for Tulsa on 4 hits, 0 walks, and 2 strikeouts.  And after a rough few innings for John Rooney and Gus Varland, Jordan Leasure pitched a perfect 9th inning to get the save. 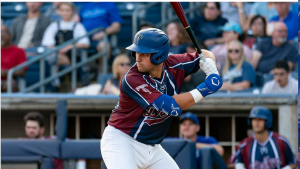 For a detailed game recap:

The Loons had the three keys to winning last night. That is, good pitching, timely hitting and good defense.

Unfortunatley I did not get to watch the game. My grandson had a football game that I went to watch, and then the LAD game was on when we got home. I missed the sound on 3 innings of the LAD game because I was trying to remember 6th grade math and parallelograms. Something I am sure I mastered 50 years ago, but my memory just is not all there for that stuff. Music and baseball…sure. But not parallelograms.