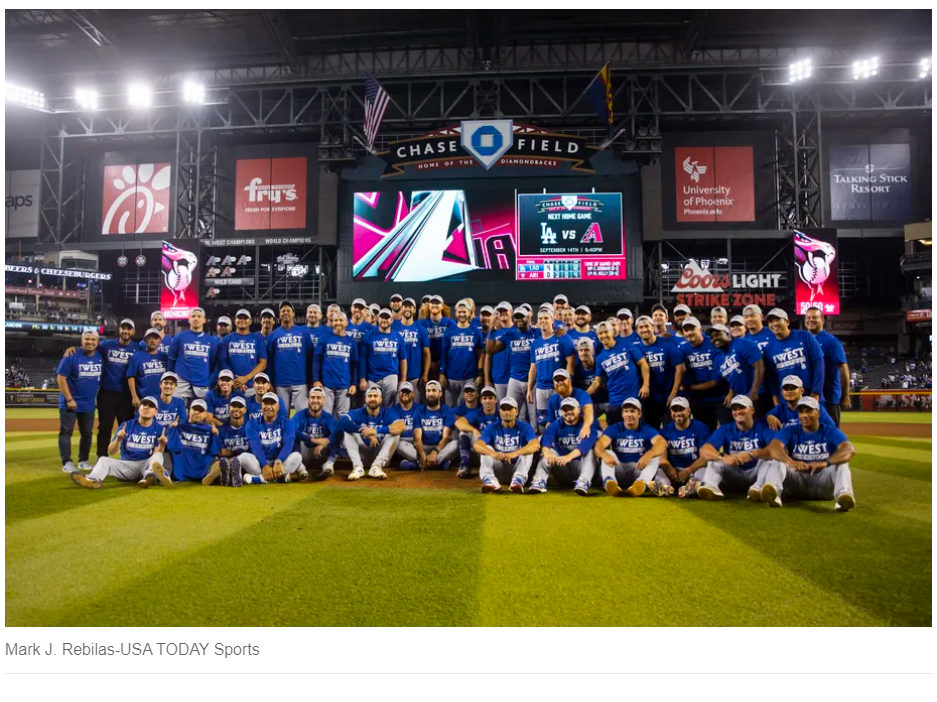 I started this post with the anticipation that the Dodgers were going to clinch the Division title.  And why not?  The Dodgers are 10-2 against Arizona this season.  It is the HOF LHSP, Clayton Kershaw, against a pitcher that did not make his MLB debut until he was 30, RHSP Merrill Kelly.

Even though Arizona is not Kershaw’s favorite team, especially at Chase, he is still head and shoulders in a better position to succeed that Kelly.

While Kelly was not his 9.69 ERA self, he was still touched by loud bats.  He allowed 5 hits, but 2 were hard hit doubles (CT3 and Trea Turner), and 2 were monster HRs; Joey Gallo 2-run (438 feet) and Freddie Freeman solo HR (442 feet).  Joe Davis and Eric Karros called them majestic, and that is certainly an apt description.  What do you think?

Joey Gallo strikes out a lot.  But every time he comes to bat he is a HR waiting to explode.  He is just one powerful bat who is fun to watch.  I can absolutely see Joey taking control of a playoff series.  I can also see him pulling a 2019 NLDS AJ Pollock.  Hopefully he can be the WS MVP.

On the other side, Clayton Kershaw flat out dominated. 7.0 shutout innings on 2 hits and 1 walk with 5 Ks.  82 pitches/55 strikes.  Not one DBack runner got into scoring position against Clayton.  He got his fastball up to 93.3 MPH against his nemesis Christian Walker in the 1st inning.  I do not know any other way than to describe the game as dominating and truly magical.

While Caleb Ferguson did issue a walk and a ground ball single to the first two batters he faced in the 8th, he got Geraldo Perdomo on a K and induced Carson Kelly to ground into a 5-4-3 DP, the 4th DP in the 2 games.  Besides the DP, the Dodgers showed off the leather with a couple of web-gems.  One by Trea Turner:

and one unbelievable play by Mookie in RF.  It even impressed Mookie.

When Craig Kimbrel got the final out, it marked the second consecutive shutout against a team that has averaged 5.4/game for the last month.  That is some elite pitching.

Cody Bellinger has 17, so he can certainly join the club.

The season started on April 8 in Colorado with a win, and now 97 additional wins later, they are 98-43 with 21 games to go.  After 2 hours and 54 minutes, the Dodgers pitched their 2nd consecutive shutout and have now reclaimed their rightful throne atop the NL West. It was their 9th NL West Title in the last 10 years.  It was 141st game.  No team has ever clinched a division before the 141st game.  It seems fairly evident that the Dodgers are going to blow by the franchise record for team wins of 106.

How fitting was it for Clayton Kershaw to be THE GUY on Division Championship Tuesday?  This looks to perhaps be a very special year for Clayton.  He pitched 7.0 perfect innings before getting pulled on his 1st start of 2022 in a cold afternoon in Minnesota.  He started the 2022 All Star Game at Dodger Stadium.  And on Tuesday he was the winning pitcher clinching the NL West Division…with 7.0 shutout innings.  Is this a prelude to more special nights?

To the best of my knowledge, this is the first Division Championship celebration for:

It all starts for real 4 weeks from Tuesday night.  The NLDS will start on October 11 with a team that still needs to be determined. They need 11 wins from October 11 The 2018 Boston Red Sox were as dominant of a team as I can remember, winning 108 games.  They went on to win the WS by beating LAD.  With Mookie now on LAD, Freddie, Kersh, JT, and all of the others, this team can be extremely special.  They have proven they are the best team in MLB, now they have to bring home the trophy.  It is the countdown for 11 wins beginning on October 11.  I know the team will not accept anything less.

For the 9th time in 10 seasons, the @Dodgers are NL West champs! #CLINCHED pic.twitter.com/mXhOYbj1ow

He sure was good last night. The only thing missing were the strikeouts. Although 5 Ks in 7.0 IP is not bad, just not vintage Clayton.

Made it to Cali safely. Enjoyed the game with my brother and sis.

Glad you made it out safely. Enjoy your visit.

The Dodgers are reportedly calling someone up from OKC to start tonight’s game. Most everyone is focused on Michael Grove. I think it is possible that AF could purchase the contract of Bobby Miller. He has not pitched since September 1. Do not know why. Why it is unlikely is because there is no obvious choice for DFA to make room on the 40 man. Since Tommy Kahnle has been activated (yesterday), Heath Hembree was DFA’d. I guess it is possible that one of David Price, Yency Almonte, or Brusdar Graterol could be placed on the 60 day IL to make room. But maybe there is a reason that Miller has not pitched since September 1.

Doc says it’s going to be Grove unless something unforeseen happens.

Other than the roster situation, they may just be watching Miller’s innings. He’s at 109 this year so far. Highest before that was in college and that was 80. Last year in the Dodger system he didn’t even reach 70 (and that included 10 innings in the AZFL).

That is a sound explanation, but then why is Gavin Stone still pitching and he has the exact same number of games (23), games started (22), and IP (109.2) as Bobby Miller? You know he is going to get a ST invite and an opportunity (albeit slight) to make the rotation out of ST. Why not see what he can do this year in a non-pressured situation? Neither Miller or Stone need to be protected this year, so that also plays into the equation.

Regardless, all of the smart money is on Grove, but I thought I would throw out another option.

Don’t confuse me with the facts!

Actually I like your option, Jeff. I’d love to see both Miller and Stone get a few innings in this month, but I think the roster crunch is the main drawback to that.

If there are a couple of guys on the 40-man that AF thinks he’ll have to just release, then I’m all for bringing Miller and Stone here to give them a little exposure. On the other hand, if everyone he plans to eliminate this winter has actual trade value (of any kind at all), it would make sense to hang on to them until he can trade them after the post season.

The roster crunch is a real problem for bringing up the kids. But what if one or two of Gonsolin, Graterol, Price, Treinen, or Almonte are deemed needed to be shut down the rest of the way, and are placed on the 60 day IL? I know it is a longshot, but I thought I saw Arsenio Hall put his finger to his temple and go hmmmm.

I guess he’s not ready to do that yet, but that time might be approaching.

We’re on west coast time the rest of the way, we play at home in all but 6 games after we leave Arizona. SD and SF are the only road trips. St Louis could be tough, San Diego won’t lie down, the rest are against West cupcakes. I think we can win 12 more playing our starting lineup for 6 innings and having our starters go no more than 75-90 pitches.

It would appear the Dodgers are not concerned about resting starting pitching. Ok. They clearly know more about their players than I do.