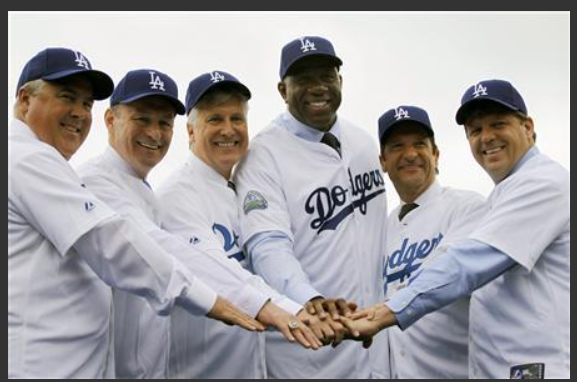 A couple days back, Badger commented that the owners profiting from the sale of  their franchises would offset any occasional temporary annual operating loss.  Currently there are two franchises that are in the process of being sold: The Los Angeles Angels and The Washington Nationals.

On May 15, 2003, Arte Moreno purchased the Angels for $183.5MM.  In their most recent study, Forbes has valued the Angels at $2.2B.  In 20 years, Moreno is going to bank $2B on a less than $200MM asset cost.  That is an excellent return, even for a team that never got to the WS while he was owner.  In the early years of his ownership, LAA did get to the playoffs:

The Angels have been to the playoffs one time since 2009, and they have not won a playoff game since 2009.  They have made some improvements this winter, but not enough to catch Houston, and probably good enough to only beat out the A’s in the AL West.  It is time for Arte to pack it in with a $2B profit on his investment.

On March 27, 2012, the Guggenheim Baseball Management purchased the Los Angeles Dodgers from Frank McCourt for a record price of $2 billion, the highest ever paid for a professional sports team at the time.  While even driving the Dodgers into bankruptcy proceedings, McCourt made a fortune on his purchase and sale.  Forbes has now valued the franchise at $4.07B.  $2B return on $2B investment in 11 years.  I doubt the value is going to decrease.

On the other side of the franchise values, the most recent sale was the Miami Marlins.  August 2017 Bruce Sherman bought the Miami Marlins for $1.2 billion.  He brought in New York Yankees legend Derek Jeter as a minority investor and CEO to help turn around the struggling baseball team.  That marriage did not last long and Sherman bought out Jeter in February 2022.

A month before the 2017 purchase, the Sherman-Jeter group put out Project Wolverine to lure investors. Per Forbes,

“…the financial model ran the team’s P&L statement from 2016 through 2027 and projected that the Marlins would be generating operating income (in the sense of earnings before interest, taxes, depreciation and amortization) of $23 million and $33 million in 2018 and 2019, respectively. Profits would hit $48 million in 2021. The value of the Marlins would be $2.1 billion by now, according to Project Wolverine.”

Never happened.  It was a Looney Tunes projection.

Bruce Sherman with a net worth of $500MM does not have the wealth that most owners have. It is a little more difficult for him to pour his own money like Steve Cohen can.  Sherman is on an island without much help.  Most of his top baseball people have left, and what is left is not very experienced at the highest levels.

Outside of Sherman, most teams are fundamentally sound financially, and yes it is hard to imagine how their investments will not grow significantly.

2021 Revenues and Franchise Value (per Forbes)

The San Diego Padres, while not necessarily trying to trade Trent Grisham and or Ha-Seong Kim, are willing to listen to trade offers.

Anybody here interested in either player? What do you offer?

P.S. Things are slow right now so don’t ruin my day by telling me that Preller won’t trade with us.

I am just not sure that the Padres and LAD match up trade wise. SD has pitching prospects, but not at the level of Miller or Stone, but I would not offer either for Kim. They need catching, but Kim is not worth either Cartaya or Rushing. Kim is not worth a top 100 player. I think I would trade Maddux Bruns, Jose Ramos and a lottery ticket. It may take one of Jorbit Vivas or Eddys Leonard to eliminate a 40 man spot for Kim. I would not include Amaya because I think Amaya could grow into a Kim, just not this year.

It will be interesting to watch how the collapse of the RSN (Regional Sports Network) market impacts revenue.

Interestingly, the Trade Simulator has Grisham and Kim fairly close in value, so I’m going to say again that I really don’t like their value system. They have Grisham at about 18 and Kim at about 21.

Kim would match up with Stone even up. We aren’t doing that.
I don’t think there is any way they do Bruns, Ramos and a lottery ticket. The Simulator would tell you it should be Bruns, Ramos and Pepiot.

I expect to come here tomorrow morning and see that Fred (Bum Fred, not Vogel Fred) has suggested CT3 and Muncy. I bet Preller would be more than happy to do that, although it would add a lot to his payroll.

I agree that Preller would not accept Bruns, Ramos, and a lottery ticket, but you asked what would I offer. That is all I would offer. I like Kim, just not enough to give up top 100 prospect.

I won’t have to bring up their names as you already did. Am I living vicariously in your head?

There’s lots of empty space in there Fred. You’ll have plenty of room to roam around.

I’m getting more lazy all the time so I doubt you will notice me in there but Jung and Darwin have both said unexpected thoughts can and will leak out of our subconscious so beware.

I have come to expect the unexpected thoughts. I often find them more interesting than what I come up with on my own.

Reed DFA’d to make room on the 40 man for JD Martinez.

Very interesting post today Jeff. Worthy of much discussion. You already know what I think.

I have wondered if this missile will eventually stall out and what that might look like. But the entertainment industry seems to sustaining momentum. People need to be entertained and will pay whatever it takes. And looking at your numbers another thought comes to mind – the rich get richer. The moment I realized this is profoundly out of whack? When the unctuous Frank McCourt declared bankruptcy then walked away with over a billion. What a world.

And he kept almost all of it after divorcing who the LA Times’ Simmons called size 0.

Hello Bobby. I look forward to commenting here. Grab Mushers Pop and bring him with you. Oh those lakers.

Sandy is the Greatest

Here is a good summary of Dodgers rotation

Dodgers Offseason: What Does LA’s Starting Rotation Look Like At This Moment?

I don’t trust Gonsolin to finish without issues. I can’t help but think he’s a TJ candidate. I look forward to what Syndergaard and May will bring. And as you know I’m a Miller fan. I think he’s gonna kick the door down this year.

It’s already been said but it bears repeating–It’s Miller Time!

Very informative article, Jeff!
I enjoy your insights back from your posts on LADT. I think both sites are entertaining.
The Forbes info shows the Mets annual revenue for 2021 at $302 million. Although their revenue has likely increased in 2022, their current payroll including Correa and the luxury tax is estimated at $500 million for 2023. Not many businesses can operate long term when their payroll is 1.6 times their revenue.
I understand that Cohen has almost unlimited resources, but only a few other teams can get close to the Mets payroll. This will create an even larger gap between the top 5-10 teams and the rest of the league. The majority of owners will be forced to operate on payrolls less than half of the Mets or forced to sell teams to Bezos, Musk, or other multi-billionaires. The players and agents may benefit in the short run, but most fans will not enjoy the competitive imbalance.

Thank you for coming by. I apologize for the delay in approving your first post. There should not be a delay in the future.

Please don’t buy the Dodgers Elon. The way you have thinned out Twitter you probably would get rid of Cody, Justin, Joc, Kike’, AJ, Cory…

Steve Cohen was a finalist in the Dodgers bid when Guggs purchased the franchise.

The Future of Long Term Contracts For The Dodgers
Trevor Bauer To Be Released?
wpDiscuz
23
0
Would love your thoughts, please comment.x
()
x
| Reply