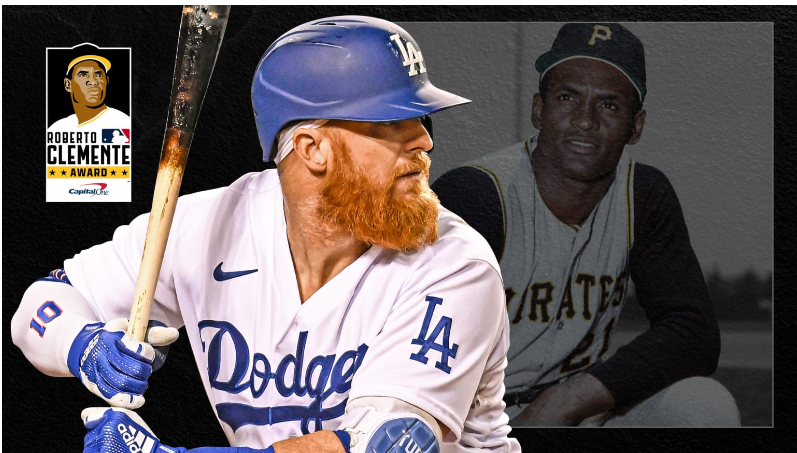 The Clemente Award honors annually the major league player who “best represents the game of baseball through extraordinary character, community involvement, philanthropy, and positive contributions, both on and off the field.”

This year’s winner is Los Angeles Dodgers’ 3B, Justin Turner.  What a truly distinctive honor, and one which has been a long time coming and well deserved.  He was honored before the start of Game 3 of the World Series on the field in Philadelphia.

There’s no one more deserving. Congratulations @redturn2 on being named the 2022 Roberto Clemente Award Winner! pic.twitter.com/XUhPA7phxv

There was also a fan vote that is included in the tabulation.  JT was the winner of the fan vote.  I know I contributed to that vote total.

Turner was honored for his philanthropic work in and around Los Angeles during his nine years with the Dodgers. That includes :

Upon winning the award JT had the following to say:

“I think with the way the [Dodgers’] season ended and how everything went, this award actually was probably as far away from being on [my] mind as it could get,” Turner said. “But it was quite a surprise, and obviously, very exciting news for us. Getting the ultimate achievement of getting to go out during the World Series and be recognized is something that is pretty special, and I know my wife and I are very, very proud of it.”

As should be every Dodger fan.  He further stated:

“It’s not why we do it. It’s not why we have our foundation. It’s not why we spend as much time as we can giving back to the community,” Turner said of winning the Clemente Award. “But it’s definitely nice to be recognized for that, and I think it’s also great for our foundation and our platform to get some national coverage and awareness, to hopefully help grow it and take it to the next level to be able to impact more people.”

That is what a true Clemente Award winner would say.  There are 29 other teams whose nominees also embody that sentiment.  Clayton Kershaw’s philanthropy work has not decreased since he won the award.

Of course every single team should be proud of their nominated honoree.  But we Dodgers fans are very fortunate to be able to formally recognize the 2022 winner of the prestigious Clemente Award.

Turner went on to say:

“I feel like I’ve always felt like it’s a responsibility for me to help our younger guys kind of realize their platform and how much of an impact they can have,” “Our number one goal is to help as many people as we can, but I think number two is to help our younger guys realize and grow and start their foundations, and hopefully impact as many people.”

JT is the Dodgers 3rd nominee so honored.  Steve Garvey (1989) and Clayton Kershaw (2012) were former recipients.  JT considers Kersh to be a major influence on this facet of his life.

JT was first nominated in 2017 (1st of 5 nominations), and was presented with the honor by then teammate and mentor, Curtis Granderson.  Granderson won the award in 2016, and his philanthropic exploits are outstanding.  JT’s other mentors in this facet include NYM players David Wright and Ike Davis (NYM roommate), and LAD teammate Adrián González. 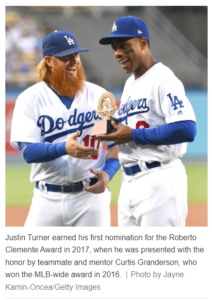 On becoming a Dodger…

“Everything in my life feels like it has really taken off since the day I put the Dodger uniform on,” Turner said. “Obviously it’s very special to me, growing up in Southern California, getting to wear that jersey, and getting to be a part of an organization that has so much history and as so many people who have impacted the game in so many different ways. I’m just trying to do my little part.”

The Dodgers have a decision to make on the future of JT with the Dodgers for 2023.  Do the Dodgers exercise their team option at $16MM, or do they buy him out and restructure a new deal to make JT a Dodger for life (player, coach, manager)?

“That’s something that will always be a part of Kourt and I’s DNA. Obviously we don’t know what it will look like when eventually I am done playing, and how events will come together and what’s going to happen on that front,” Turner said. “But I think it’s something we will always continue and always be giving back and trying to help people.”

“or do they buy him out and restructure a new deal to make JT a Dodger for life (player, coach, manager)?”

Justin might have another year as a part time player. He and Muncy can split DH, and with Vargas hidden in left field they can split days at third base. Or Edwin Rios can split time at third with Turner. Or Rios and Vargas can split time. Or we can get Kiké back and he can split a banana. Or they can trade Vargas and Rios, along with a young starter, Pepiot or Miller for Reynolds and Bednar. or….

Congratulations to Turner for the Clemente Award. This award goes back to ‘71. How many teams/cities have never had a winner? What team/city has had the most winners? Has a Florida team/city ever won?

Neither Florida team (Miami or Tampa Bay) has had a Clemente Award Winner. Neither have 6 others – Colorado, Nationals, Rangers, Blue Jays, Royals, or LAA.

I liked that JT mentioned Kershaw as his mentor for giving back and that JT wants to do that for younger Dodgers as well. Well deserved.

I like the idea of an Utley contract for JT.

We got up early this morning so we could get to the airport and catch our flight to Hawaii. I checked my emails around 6:30 and saw an email that came in at 3:53 A.M. from Hawaiian Airlines. It said our flight was cancelled. They didn’t have another flight available prior to Friday. Really? Happy wife, happy life. My wife ain’t happy.

I am so sorry to hear that. How does that happen where they cannot find another flight from any airline? That has happened to me before (not Hawaii), but the airline found another flight from another airline so I could make my trip. It was a business trip so I could have survived without it (actually preferred…I hate flying). They did it without me asking. Others took vouchers for future flights. Does this impact your accommodations on the Island?

Yes. We had to scramble to cancel luau and hotel and taxi and prepaid luggage reservations. And, it’s cool and wet in Washington all this week. Thanks for your empathy Jeff.

Sorry to hear about your vacation plans, Fred. What a bummer. Hopefully you’ll be able to re-schedule soon.
And next time, take the train.

A shock from the Options opting In or Out…Chris Sale has decided to not opt out of his final 2 years of his 5 year $145MM contract. He has $55MM remaining. For the first three years of the agreement, Sale has pitched just 48 1/3 innings through 11 starts.

Sale was going to opt out, but he decided to follow Arenado’s lead. ﻿ 😂 ﻿

Maybe he asked his wife for advice as well.

Instead of recapping a story, here is the original story on part of the Yordan Álvarez trade.

How ironic.
The Y. Alvarez nobody ever heard of becomes a star and the “huge prospect” Y. Alvarez turns into nothing.
That’s baseball.

Yeah, blame this one on Farhan. He should have insisted that the Y. Álvarez was Yadier and not Yordan. Take him or leave it.

I really wanted Yoán Moncada, he of lightning speed and one good year. The Dodgers passed on Moncada so they could sign Yadier Alvarez. I guess the Dodgers and I were both wrong.

Alvarez, Yordan is having a rough Series.
He’s also maybe best as a DH.

That said, I wish the Dodgers still had him and that bat.

Which prospect looks best just by looking at their scouting grades:

There are other components other than scouting grades, Vargas and Gelof are basically the same age. Gelof is 29 days older than Vargas. Gelof played more at 2B than 3B last year. He played exclusively at 2B in AAA (79 innings, 36 chances). .974 Fielding % at 2B and .922 Fielding % at 3B.

I do not think I would take Gelof over either Vargas or Busch much less both of them. Gelof is not the hitter either of them are. He lags way behind Vargas in BA, OBP, SLG, and OPS. While closer in BA to Busch, Gelof still trails Busch in all 4 categories. Gelof does not have the raw power of Busch or the run production. He does not possess the doubles ability of either Busch or Vargas. Gelof’s K rate is higher than both Busch and Vargas and way higher than Vargas, and his walk rate is not as high as either Vargas or Busch.

Gelof does not have better fielding numbers than Busch or Vargas. He is looking to be transitioned to 2B over 3B. He may grade better at run, but he is not a better base runner than Vargas.

I must chastise you, Jeff.
First you get Fred all hot and bothered about Gelof.
He decides to trade both Vargas and Busch for him, and then you inform him that Gelof isn’t as good as either one of them let alone both.
Which is basically what I told him when he brought up the trade, but he doesn’t like to listen to me because I once insulted Joc. ﻿ 😂 ﻿

Well, we need something to talk about while the Phils and Astros battle each other, so this conversation helps with that.

Exactly
Although I don’t remember you insulting Joc directly. You have however said you prefer your cousin for LF.

Gelof is just my trade du jour but I like having speed at third that also has some pop. That said, I think Gelof if groomed for 3rd, would become a fixture there.

I like Gelof. Just not for Vargas or Busch and especially not for both. Trading a top prospect is not something that Oakland would usually do, but if the Dodgers could get Gelof out of Oakland, I would like to see it. But he is certainly not worth an overpay, and Oakland will undoubtedly not trade him unless there was an overpay.

Well deserved. JT is one of the best in his endeavors for those less fortunate. I bring him back at a lower number. He is a Dodger icon, but his everyday status is past.

Singing the Blue
Reply to  Oldbear48

“His everyday status is past”. Why?

For the months of Jul-Sept this year he was one of the very best hitters in all of MLB.

If it weren’t for the fact that he’ll be 38 next year, nobody would be talking like this. They would just say he had a bad first half of the season.

He had a 1.9 bWAR this year which, by the normal standards of measurement these days is worth just about 16 million dollars in salary.

He never was an every day player. And he’s 38 next year. His defense is less than, but he could probably help some offensively. I have no idea what the plan for him is, but we may not have a better option. Would like to be in on management discussions on Rios.

We are going to miss Trea’s speed. Would be difficult if not impossible to replace it.