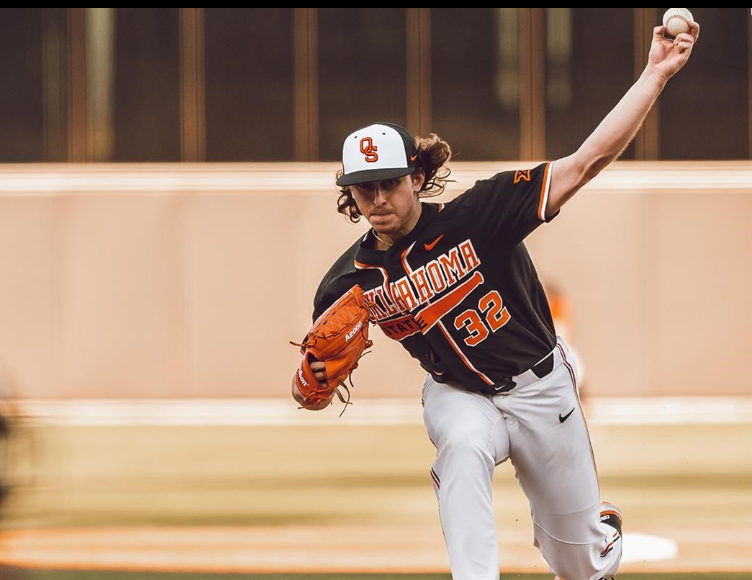 He was born in Canton, Georgia and attended Sequoyah High School in his home town of Canton.

Following graduation he then started on a baseball journey that took him to three post-secondary institutions.

First he headed off to Clemson University for the 2019 season where he pitched primarily in relief although he did make three starts. He pitched 13 innings and did strike out 15. His success was primarily against left-handed hitters who had one hit against him in 19 at bats. However, overall it was not a good year as he gave up an earned run with each inning pitched. To make matters worse, after his early season struggles, the Clemson coaches shut him down.

Wrobleski transferred to State College of Florida for the 2020 season. That was the Covid-19 season and he  made only four appearances as a starter. He went 2-2 with a 2.89 ERA and racked up 27 strikeouts in 18.2 innings.

As with so many young pitchers, troubling arm problems meant that Wrobleski would most likely have to have Tommy John surgery, and he did.

The Dodgers, as they so often do, selected Wrobleski knowing he would be surgery bound and Vice President of Amateur Scouting, Billy Gasparino, was anxious to bring the young left-hander on board.

“From a talent standpoint, it’s an athletic lefty up to 95 (mph) with a plus curveball,” Gasparino said. “We thought he was maybe in the top-five round talent range that we’ll get in the 11th round. We’ll go through the Tommy John process and hope he comes out the other end as a healthy, high-upside lefty.”

His pre-draft scouting report from Baseball America indicates he has the possibility of two plus pitches.

According to Baseball America, he has a fastball that sits between 91-93 mph but has touched 95 mph. In addition, he has two above-average secondary offerings.

“His low-80s slider flashes plus potential and his above-average changeup is impressive as well. But Wrobleski left after one inning in an April start {2021} against Texas Christian with an elbow injury that sidelined him for the rest of the year. A team picking him this year is banking on being patient while he recovers from Tommy John surgery, so teams may simply wait to see him return to health again at Oklahoma State.”

Wrobleski does not throw particularly hard, with reports indicating his fastball sits at 92 mph. It is his slider which is considered by scouts to be a plus pitch and his changeup is also considered to be above average.

With his three-pitch pitcher arsenal , look for him to be another solid Dodger bullpen arm in the making and who wouldn’t love his expected dominance against left-handed hitters.

Justin Wrobleski debuted with the ACL Dodgers on June 17 and since then has pitched 15 innings over 10 appearances posting an ERA of 1.80 and a WHIP of 0.80. He has struck out 21 and has yet to walk a better.

On August 23, Justin was assigned to Rancho Cucamonga and has been activated.

I am on vacation, and I do not have the time to do complete writeups every night.  But I will include the scores and box scores.

Wrobleski? Can’t say I ever heard of him. Another TJ pitcher huh. We sure have our share of them. They all have a decent shot at pitching for 5 years.

What happened to my man Outman? Appears to have gone in the tank. Maybe he needs Jimmy John’s surgery.

Outman got a taste of filet mignon and now only nibbles on ground round.

The OS on Wrobleski hat should only be on an Oregon State hat.

With all the TJ pitchers being drafted by Dodgers it is apparent that Dr. Neal ElAttrache has a say on who gets drafted. It’s part of his business plan.

Ask the White Sox if defense matters after last night. Third baseman drops a foul pop up to end the game with a win but the extra swing given to the batter results in a walkoff home run.

I think Smith should start taking ground balls at third this off-season in case Cartaya earns a place in the batting order over Vargas or Busch sooner than expected or if Dodgers trade both Vargas and Busch.

Same colors. OSU on black this year I believe.

I was just perusing the Oregon State roster, seeing how many were from California, counted 13, when I came across the name Hunter Cope. He’s a local kid, Mater Dei High School, no doubt a scholarship there. He’s listed at 7’, 267 pounds. He’s a freshman so he should fill out soon. I think we should just go ahead and put a claim on him now.

Vargas and Busch will hit. Where they play in the field might still be questionable. They’re both listed as infielders but they will make the bigs with their bats.

Speaking of bigs and bats, anyone seen Edwin Rios?

Defense wins championships! Well, maybe not in MLB, though pitching is part of the defense. A “most of it” argument could be made.

Kershaw is scheduled to pitch tomorrow and be available 5 days after that. Hope so. We still have enough there to go with 6.

I wouldn’t be surprised if the team drafts TJ pitcher just because they are under-valued. When you draft so low, you gotta look for diamonds with dust on them.

Yeah, good point. I just don’t like reading about how often TJ pitchers careers are shortened. I won’t be surprised if Buehler is never the same.

You can count on one hand the number of MLB starting pitchers that returned to pitch well after a second TJ surgery. Chris Capuano, Nathan Eovaldi and now Mike Clevinger and Drew Rasmussen, both this year as starters. The odds are stacked high on him returning to any semblance as to who he was.

“On average, the typical TJ revision isn’t as successful as the typical primary TJ,” Dr. Andrew Cosgarea, an orthopedic surgeon and professor at the Johns Hopkins University School of Medicine, said Tuesday. “… The first time you drill a hole in the bone it is fresh and clean, but if it happens again you already have a hole there and that hole is filled with scar tissue. … Scar tissue isn’t as healthy as original tissue. It doesn’t have the same blood supply; (it is) not as durable.”

Of the 42 major league pitchers who have had two Tommy John surgeries, the majority did not pitch in the majors again after their second or fared poorly over a short period. But many of those pitchers were well into their 30s at the time of the second surgery. Mike Clevinger was the 43rd. Buehler might be the 44th. Buehler will be baseball age29 when he returns in 2024.

Does Buehler get offered and sign a two year deal as did Mike Clevinger?

That is why I was so surprised that AF passed over Jaden Hill over Maddux Bruns. Bruns was overall pick 29 while Hill went to Colorado in the second round, #44 overall. Hill came back to pitch July 2022, and has [itched very well.

My first choice was Ty Madden, but my overwhelming second choice was Jaden Hill.

The Great Lakes Loons have been one of the best strikeout teams in Minor League Baseball this season, entering the series with the Fort Wayne TinCaps ranked third in all of MiLB in pitcher strikeouts.

In a doubleheader Thursday night, they cemented their legacy as the best strikeout team in franchise history.

The Loons struck out 18 batters in two seven-inning games – a 9-4 win followed by a 3-0 loss to the TinCaps – to set the single-season record for strikeouts in a season. Great Lakes has now punched out 1,260 batters this year and counting, surpassing the 1,256 strikeouts recorded by the 2014 Loons.

Major League Baseball will send players to South Korea for a postseason tour in the league’s first trip to the country since 1922.

The games between an MLB team and players from the South Korean league will be at Busan Sajik Baseball Stadium on Nov. 11-12 and Seoul’s Gocheok Sky Dome on Nov. 14-15, the commissioner’s office said Thursday.

Busan Sajik Baseball Stadium you say. I’ll make a note. If I’m in the area I might buy a ticket. By the way, who’s going?

That is a prime example of grading a test too quickly.

ESPN’s Jeff Passan provides a breakdown of what is indeed an extremely complicated structure (Twitter thread). The contract actually begins in the current season, and Rodriguez is guaranteed $120MM over the next eight years, through 2029. After the contract’s seventh year, the Mariners must decide whether to effectively re-extend Rodriguez for either eight or ten years, with the size and value of that long-term “club option” dependent on how Rodriguez finishes in MVP voting through the contract’s first seven seasons.

At minimum, Seattle will be deciding on whether to extend the contract by eight years and another $200MM, but the option can grow to as much as ten years and $350MM in additional money (presumably, with multiple MVP wins). That would push the contract to 18 years and $470MM in total value.

If the Mariners do not exercise their multi-year option after Year 7, Rodriguez will then have a five-year, $90MM player option that he can exercise after Year 8 of the contract. That $90MM figure is considered guaranteed money (as is the case with all player options), hence the $210MM guaranteed portion of the deal. That structure indicates that, contrary to initial reporting, the guaranteed portion of the deal spans 13 years. This would also indicate it maxing out at 18 years, as opposed to the previously reported 20.

There is, of course, a scenario where the Mariners do not pick up their 8- to 10-year “club option,” and Rodriguez also declines his five-year, $90MM “player option,” which would then allow him to reach free agency after eight years, when he’ll be heading into his age-30 campaign.

I’d like Trea to get a 5 year contract with big performance bonuses that if earned would make his salary larger than Seager’s or Lindor’s.

He wouldn’t, but I’d like to see it too.

I dislike that Rodriguez contract, almost as much as I disliked that other Rodriguez guy’s contract about 50 years ago. This kid is 21 and under team control. I’d wait to see if he pulls a Bellinger before paying him that kind of dough.

33 year old LHRP Scott Alexander has been called up to the SF Giants and will be in the bullpen tonight against Minnesota.

Justin Wrobleski made his debut with the Quakes tonight. He pitched three innings giving up three singles, no runs, walked one and struck out one. He threw 35 pitches, 20 for strikes.