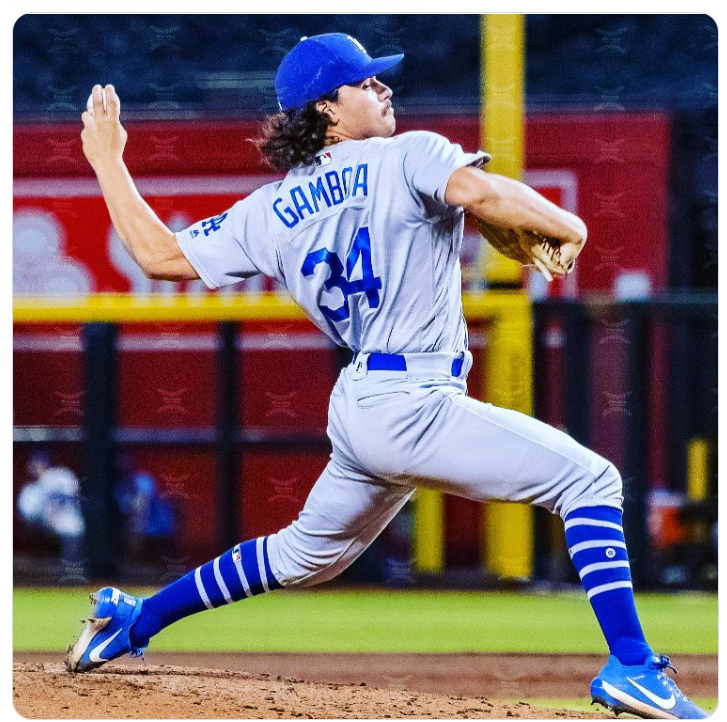 After getting their 1st away game victory, the Dodgers were sent out their Ace Ryan Pepiot to see if they can get back-to-back victories.

Both teams went out in the first without scoring.  In the 2nd, Jason Martin got the Dodgers on the board with a HR (2).  The lead was very short lived, as Nomar Mazara led off with a single.  Brent Rooker stroked a double into LF, putting runners on 2nd and 3rd.  Matthew Batten followed with a single scoring Mazara and moving Rooker to 3rd.  After a strikeout for the 1st out, Domingo Leyba singled home Rooker, and moved Batten to 3rd.  After a mound visit, Pepiot struck out the next two batters to leave the runners stranded.

The Dodgers scored two in the third.  Jake Lamb had a one out single, and was followed by an Andy Burns BB.  Eddy Alvarez followed with an infield single to load the bases.  Ryan Noda popped out, and the Chihuahuas believed they got out of the jamb, when Jason Martin struck.  However, he reached base and Lamb scored on the catcher’s passed ball.  Tony Wolters then walked to force home Burns, and a 3-2 lead.

Pepiot allowed a two out walk, but got out of the 3rd, and his night was done.  63 pitches and 42 strikes.  The Dodgers got another run in the 4th again because of wildness.  Zach McKinstry led off with a single.  After the next two batters got out, McKinstry moved up to 2nd on a WP.  Andy Burns singled McKinstry to 3rd, and Zach came home on another WP.

Daniel Zamora relieved Pepiot in the 4th, and sailed through the 4th and 5th.  The Dodgers padded the lead in the 6th after Zach McKinstry hit his 4th triple of the season, and came home on a Miguel Vargas Sac Fly.

In the bottom of the 6th, Zamora walked the leadoff hitter, Nomar Mazara, and Jon Duplantier was brought in to relieve Zamora. Duplantier walked the first hitter he faced.  Both runners moved up on a sac bunt.  Mazara scored on a Batten sac fly.

With two out, Ryan Noda doubled and was followed by Jason Martin’s 2nd HR of the game (3rd of the season).

Miguel Vargas joined the party in the 8th with his 2nd HR of the year.  Shane Greene relieved Duplantier in the 8th. A single, walk, and single scored a run.

After the Dodgers went down in the top of the 9th, Marshall Kasowski came in to close it out.

Highly regarded 24-year-old Amarillo Sod Poodles RHSP, Bryce Jarvis, the DBacks #7 prospect, started for Amarillo in Game 1.  He was matched with Driller’s LHSP, John Rooney, in a tight pitcher’s duel into the 5th.

The Driller’s struck 1st in the 3rd with a Jorge Amaya HR.  As it turns out, that was the only hit for the Drillers in Game 1.

The Sod Poodles evened the score in the top of the 4th with a Dominic Canzone HR.  They took the lead for good in the 5th.  Juan Centino singled and moved to 2nd on a sac bunt.  Centino moved to 3rd on a WP.  Drew Stankiewicz then singled Centino home for the lead.  After the second out, Dominic Fletcher singled.  Stankiewicz and Fletcher moved to 3rd and 2nd on a balk, and Stankiewicz scored with Fletcher to 3rd on a 2nd balk.  Dominic Canzone singled Fletcher home for the Sod Poodles 4th run.  Mark Washington came in to relieve Rooney and got out of the inning.

In the 6th, after one out, Washington surrendered 3 consecutive singles for one run.  There was a walk to load the bases, and a sacrifice fly brought home the second run of the inning.

In the 7th, Melvin Jimenez relieved Washington.  Jimenez walked the first two batters.  The leadoff batter moved to 3rd on a F8, and scored on a ground out 5-3.  That completed the scoring for the Sod Poodles.

It is difficult to win when your offense has one hit.

The Drillers are sending out the following lineup for Game 2:

Three of the nine batters are below the Mendoza line, four are hitting between .200 and .250, and two are hitting north of .250.  Hopefully some of the batters will get hot for the 2nd game.  Tulsa hitters will be facing 23-year-old LHP, Kenny Hernandez.  On the bump for the Drillers is 25-year-old LHP, Alec Gamboa (Pictured).

This was a night of Tulsa solo HR’s.  James Outman hit his 1st HR of the season in the 3rd, giving the Drillers the 1-0 lead.

Jose Martinez relieved Gamboa. He allowed a leadoff double, but got out of the inning without any damage.  But that was not the case in the 5th.  Dairon Cuevas opened the frame with a single.  Cuevas scored the tying run with a double by Drew Stankiewicz.  Stankiewicz moved up to 3rd on a sac bunt, and scored on a 6-3 ground out.

The lead was short-lived as Outman led off the home half of the 5th with his 2nd HR of the night.

Guillermo Zuniga relieved in the 6th, and shut down the Sod Poodles in order.  With one out in the 6th, Brandon Lewis slugged his 1st HR of the season, giving the Drillers the lead.

In the 7th, Zuniga set the Sod Poodles down in order again, striking the last two batters he faced, to preserve his win.  Outman was the sole Driller to get two hits.  The win takes the Drillers to 6-3 as they split the DH.  They are off on Easter.

The Loons came in to the game with a lineup that was offensively challenged as were the Drillers.  Probably more so.

In the third inning Aldrich De Jongh led off with a triple, and came home on a 1-out 6-3 ground out for a 1-0 lead.

Nick Nastrini allowed a double in the first two innings, but no runs.  In the third, Noah Mendlinger led off with a single.  After a strikeout, Mendlinger stole second.  Mack Chambers then doubled Mendlinger home, and after 50 pitches (30 strikes), Nastrini was done.  Lael Lockhart came in to relieve, and on a 2-0 count allowed a run scoring double to Jacob Buchberger.

The score stayed 2-1 until the 7th.  After a 2 out BB to Kekai Rios, an Edwin Mateo single, and back-to-back walks to De Jongh and Jorbit Vivas, the scoring run came home.

The teams went into extra innings.  Neither team scored in the 10th.  In the 11th, with the ghost runner on 2nd, Eddys Leonard and Leonel Valera walked to load the bases for the Loons.  Zac Ching doubles in two, and with runners on 2nd and 3rd and nobody out, still threatening.   After two outs and the runners still on 2nd and 3rd, a walk and HBP got the third run of the inning and took a 5-2 lead.

After Brian Duensing pitched 1.2 scoreless innings, Jordan Leasure followed that with 2.0 scoreless innings.  Andrew Shaps came in to start the 10th, and things would not go well.  With the ghost runner, a walk, and a fielding error, the bases were loaded with one out.  Back-to-back walks and a HBP scored three to tie the game, and Shaps was headed for the showers.  Carlos Alejo came in to relieve, and on his first pitch, Aaron Antonino hit a sac fly for the walk off win.  The Loons managed all of 4 hits on the night.

Maddux Bruns started and got the 66ers out in order in the first.  Alex De Jesus started the Quakes scoring with his 1st HR of the season.

In the 2nd, Bruns ran into a little trouble. He allowed a run (earned), on two doubles and a walk. He did have 4 K’s.  Robbie Peto relieved Bruns with two out and two runners on.  He struck out Arol Vera for the third out.

In the 4th, the 66ers used a single, stolen base, and another single for their 2nd run and the lead.  In the home half of the 4th, back-to-back HRs by Alex De Jesus (2nd of game) and Damon Keith (3), and the Quakes were back out in front.  With Yeiner Fernandez reaching on an error, a walk, Jake Vogel tripled home two more. After a strikeout, Luis Yanel Diaz hit a 2-run HR (3). After 4, the Quakes are in front 7-2.

Peto walked the leadoff hitter in the 6th, but got the next two batters on strikeouts.  During one of the ABs, Peto WP’d the runner to 2nd.  Kevin Bautista came in to relieve Peto.  After a single scored the runner, the defense fell apart.  There was a fielding error in RF putting runners on 2nd and 3rd.  They both scored on a throwing error.  The lead tightened to 7-5.

The 66ers used 2 walks, a passed ball, and a fielders choice to score another run.  After a HBP, Braydon Fisher came in to relieve Bautista.  He got the third out on a K.  The Quakes got that run back with a Yunior Garcia double and a Diego Cartaya double.

Fisher issued a walk in the 7th who came around to score on a double, again cutting the lead to one run.  The Quakes pushed the lead to three with two of their own in the 7th.  The Quakes put a runner on via a fielding error.  After a force out, Jake Vogel doubled to put runners on 2nd and 3rd.  Yunior Garcia followed with a 2-run double.

Both teams went quietly in the 8th.  But with Martin Santana now on in relief, the 66ers got off the floor in the 9th.  They got a pair of singles, but were down to their last out and three runs down.  After a WP put runners on 2nd and 3rd, a third single in the inning scored 2.  That single was followed by a two-run HR by Myles Emmerson (1).  The Quakes go quietly in the 9th in the loss.