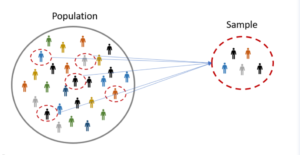 I’m honored that Jeff has asked me to contribute an article or two to his new blog.  It’s a small sample size, but I have to say that so far, the content on this blog has been outstanding.  Of course, you would expect nothing less from AC and DC.

Here I am sitting on my recliner taking flights of fancy that imagining a 115 win season for the Dodgers.  But I also wonder, are the Mets and Giants truly the best teams in baseball.  Alas, teams have yet to play 20 games, so it is but a small sample size.  Right?  As a baseball fan I have had it ingrained in me that you shouldn’t base your decisions, or hopes, on a small sample size.  You’re probably aware of the fact that you shouldn’t jump to conclusions based on a week or two’s worth of data.  I wonder though, why do we apply that form of thinking more at the beginning of the season, as opposed to say in mid-July.  Truth is, over any given week different stuff is going to happen.  We just notice it more at the start of the season because it’s the only thing that has happened yet.   ; if you look at any seven day stretch throughout the year, you’ll find similarly odd results.  Owen Miller will not be the first hitter since Ted Williams to it over .400 for the year.  Eric Hosmer is not going to win the National League batting average title this year.  Nor will Joc Pederson be the homerun leader at the end of the season.  Yet here these folks are at, or near, the top of the statistical leader board.   They could have the same results over a 15-20 game span in August but, other than perhaps win a player of the week award, no one will pay these stats any mind.

The reality is, if Mike Trout were to have a 100 at-bats against the worst pitcher in the league, that pitcher may strike him out a time or two.  He may also hit into a few double plays.  Consider the Home Run Derby.  Even there, the best hitters don’t hit every pitch on the screws and out of the park.  Baseball is a hard game, and you just simply can’t hit doubles, triple, or homeruns on demand, even when the pitcher is trying to help you.

Jonah Pemstein, in a study for Fangraphs wrote:

“Small sample size” is a phrase often used throughout the baseball season when analysts and fans alike discuss player’s statistics. Every fan, to some extent, has an idea of what a small sample size is, even if they don’t know it by name: a player who goes 2-for-4 in a game is not a .500 hitter; a reliever who hasn’t allowed a run by April 10 is not a zero-ERA pitcher. Knowing what small sample size means is easy. The question is, though, when do samples stop becoming small and start becoming useful and meaningful?

That’s a question that I wish I could answer definitively.  How big does a sample size need to be before it stops being… small?