The Dodgers Offense is Starting to Percolate 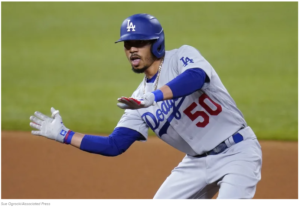 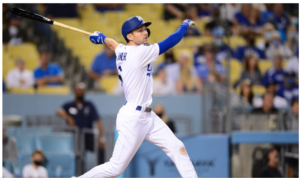 Who are the offensive stars of the Dodgers?

Mookie Betts – Acquired in trade with Boston for Alex Verdugo, Connor Wong, Jeter Downs, and half of David Price’s contract.

Trea Turner – Acquired via trade in a package with rental Max Scherzer, for Keibert Ruiz and Josiah Gray.

Does AF need to go outside of the organization to get the elite position players?  More on that at a later time.

By the way, where are those Boston fans who were laughing and telling anyone who would listen that Boston would not trade Verdugo straight up for Mookie?

The team goes as do the top three in the order go.  Is it a coincidence that Mookie sits, and the Dodgers are shut out?  The next game he is back in the leadoff role, and the Dodgers put on a 14 run 24 hit show.  I ask that rhetorically and with tongue planted firmly in cheek.

Yes the Dodgers lineup is solid.  OK, better than solid.  They have the #1 OPS of any ML team, and are .35 points better than the #2 team.  The Dodgers also have the best OBP of any team in MLB.

While the team certainly stands at the pinnacle, the team needs someone to drive the bus.  That someone is Mookie Betts.  Mookie is playing at an MVP level.  He leads all of MLB with 48 runs.  He leads the NL in HRs and is #2 in MLB with 13.  While he is a leadoff hitter, he is still Top 10 NL and Top 14 MLB in RBIs with 31.

But Mookie is not alone.  #2 in the order is also making noise.  While Freddie’s HR total is down, his OPS is just south of .900.  There is no better #1 and #2 in the lineup than Mookie and Freddie.  Here is where the duo rank in the NL.

But how about the #3 in the lineup?  Trea Turner now has a 19 game hitting streak, and that power is starting to come around.  His OPS is now north of .800.  Here are the splits for the top 3 in the lineup.

Seasonal OPS for the three: 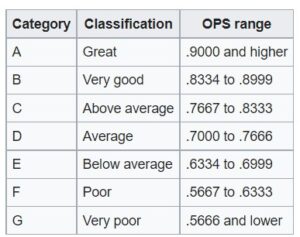 Not to be overlooked was Ryan Pepiot’s 3rd start of his MLB career.  Before the game Pepiot was recalled and Phil Bickford was optioned to OKC.  Will Pepiot be optioned a 3rd time to make room for another reliever, or will he remain on the roster and stay in the rotation until Andrew Heaney and/or Clayton Kershaw are deemed ready?

Ryan continues to show improvement.  He still has a tendency to lose that control and command.  He still walks too many and too many other 3 ball counts.  At times, he has trouble with his command and cannot get that 3rd strike to be chased.  These are ML hitters, and they do not chase as much as do MiLB hitters.  He has to trust his pitches and get them to start in the zone and rely on his late movement.  At times it is beautiful to watch, but other times he is just to careful and perhaps not trusting.  Will Smith did a good job of calming him down and getting him to focus and believe.  Will Smith is becoming a premier catcher as well as an offensive force.

Brusdar Graterol inherited 3 runners in the 5th with one out, but navigated the course well, allowing only 1 run on a sac fly.  He allowed a double in the 6th, but no runs.

The next three relievers were somewhat of a roller coaster ride.  Alex Vesia allowed 3 hits and a run before getting out of the 7th.  Daniel Hudson who appears to be assuming the Blake Treinen role had lapses in control.  He hit two batters in the 8th, but thanks to a DP, nothing else.

Craig Kimbrel gave his best KJ impression in a non-save situation, but still got out of the inning to preserve the victory.  How long before the honeymoon is over for Kimbrel?  If this happened to KJ, the angry masses would be out looking to DFA him.  I recognize that KJ is also struggling some as the Atlanta closer.  There is not going to be any change in the closer’s role.  It looks like Kimbrel is closer to the 2021 CWS version than the 2021 Cubs version.  For the season, Kimbrel has a 4.15 ERA and a 1.38 WHIP.  For May those metrics are 5.63 and 1.75 respectively.

As I am writing this, there still is no definitive word on the fate of Max Muncy.  Will he sit again tonight, be placed on the IL, or inserted into the lineup?  Edwin Rios has done nothing to be extracted from the lineup.  Given the chance, can he put up 35 HRs in a season?  Edwin is a better offensive option than Max right now.  If Max is hurt, he should go on the IL and Kevin Pillar’s contract should be purchased.  Pillar is another CF option as well as a ML bat.  Gavin Lux can stay at 2B and continue to show significant signs of improvement.

The LAD train has left the station, and Mookie is the engineer. Those warning track power flies are now starting to leave the yard.  Belli is starting to show signs of life.  Get on board, it could be a fun ride.

Pepiot reminds me of Gonsolin. Great stuff that moves out of the strike zone. When those two start controlling the edges they are 180 inning pitchers. And I can’t believe I’m saying that like 180 is a big deal. I remember when 300 was a big deal. Different time. I’m old.

The Dodgers are built to score a lot of runs. As the year wears on, I still believe pitching will need to be reinforced.

Gonsolin has more upside with his pitches than does Pepiot. However, Pepiot’s change has the chance to be lethal. His fastball yesterday had late life up in the zone. A week after Christian Walker took him deep with a fastball out over the plate, Ryan made him look bad with his fastball at the top of the zone. 95-96 with late vertical rise life and that change. Both are going to go as far as that command and control take them, and both of them could be mid rotation starters. They are both bulldogs and can fight out of trouble they put themselves in. Good comp.

All it might take to pitch 300 innings is some horse liniment.

I’m sure someone will pick up Keuchel once he gets released. He’ll basically be free. Would AF take a chance that he could fix him? He was really good as recently as 2020 and it seems as though his control has deserted him the past couple of years.

As far as Rendon is concerned, I think his living the “clean life” and rejecting the “Hollywood life style” has had a major effect on his wrist. He just needs to party more and that would fix everything.

The Dodgers already have a better version of a soft tossing LHP in Tyler Anderson.

Speaking of Rendon, sometimes Friedman is made to look good by players who don’t accept his offers.

I think Kimbrell’s main problem may be lack of innings. He just doesn’t seem sharp and it’s hard to stay sharp when you’re only used once a week.

Something I hadn’t thought much about, but it occurred to me this morning is the lack of communication between the Dodger training staff and Muncy during the lockout. That could have had a major effect on his rehab and they are paying for it now. I still think there is a good chance he winds up having TJ.

Max will get paid his $13MM for this year but the team has a $13MM option on him for next year with a $1.5MM buyout. I wonder if they would be good sports and pick up the option if he needs TJ.

Anyone remember how long Seager was out when he had TJ? I seem to remember it wasn’t quite as long as a pitcher.

Last edited 6 months ago by Singing the Blue
0
Reply

Muncy is a first baseman first and foremost. Rios’ best position is first base. Lux should be the regular second baseman or shortstop if Trea is not extended with Busch or Taylor taking over at second.

That’s my case for not picking up his option.

If Muncy has TJ then Rios surely gets his at bats. Pillar can fill in for both Taylor and Bellinger. Would Bellinger then be the guy that gives Betts a rest in RF?

I’m curious how Muncy can swing so hard and still be experiencing pain in his elbow.

I wonder if Bellinger will ever keep his head still and level his swing some.

When he goes up the middle his head is level. But that seems to take away from his launch angle and HR power.

Was watching Bellinger close up batting practice on Backstage Dodgers and head was dipping a nearly a foot on every swing. But, I too noticed when he goes oppo or back through the box his head doesn’t bob. I have no idea how to stop the dip when he swings for launch, but, maybe show him some film of Jeff Bagwell hitting home runs. Hardly any movement, just a quick, powerful swing.

It is clearly evident that his head is level when he goes back up the middle. It is the upper cut launch angle swing that jerks his head into the 1st base dugout. I have no idea how to fix this, but watching film, and Freddie, should help him. I do not know if RVS is the right hitting coach for Cody. But I am watching the game in a recliner, not in the dugout.

The Dodgers recalled RHP Michael Grove, selected the contract of OF Kevin Pillar, optioned RHP Ryan Pepiot and placed IF Max Muncy on the injured list with left elbow inflammation. To make room on the 40-man roster, RHP Tommy Kahnle was transferred to the 60-day IL.

I’m back! I’ve dreamed of this moment since I was a little kid driving down the 101 to Dodger stadium. Last couple months have been a journey but ultimately found my way home! #818

I think we are better served with Rios in and Muncy out. Whatever is needed, Max has to do it now. Not sure about Pillar but hopefully he carpe’s the diem.

And the revolving door to pitching continues to spin. Is this plan for the rest of the year? I doubt it.

Bobby Miller and Lael Lockhart are starting tonight for Tulsa and Great Lakes respectively. Michael Grove was pulled from his previously announced start tonight for OKC. Will he get one of the starts against Pittsburgh pushing Buehler and Urias back a game, or will he go into the bullpen? Pittsburgh is the team he made his MLB debut against.

Its quite hard not to be enthused by this team on all levels, no?