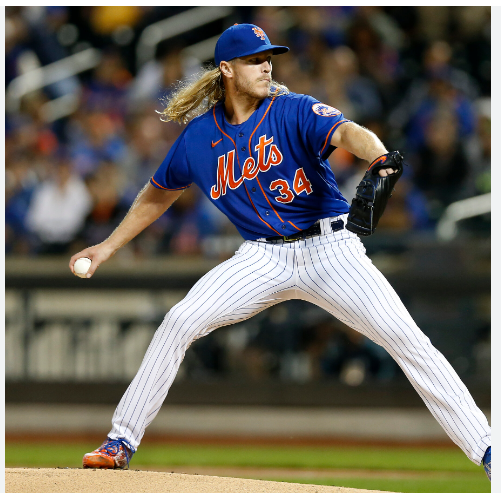 I have to admit that I was taken aback by the Noah Syndergaard signing.  I am not disappointed, just a little surprised.  I was expecting the Dodgers to sign one of the pitchers that Dustin Nosler had outlined.

Syndergaard could be the best #5 rotation pitcher in MLB.  That just pushed the depth down a peg and made it deeper. 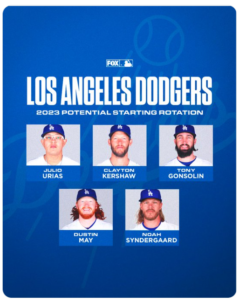 Pepiot could and maybe should move to the bullpen.  His fastball and change could be a devastating combo in relief situations.  Michael Grove and Andre Jackson are a repeat of Ross Stripling and Mitch White, and will probably start at OKC.  If Pepiot also moves back to OKC, the OKC rotation could be the depth identified above.  That excludes Landon Knack who also deserves to be in the AAA rotation.  That does not count the AAAA pitchers the Dodgers will obviously tap, as they do every year.

We all know that Syndergaard is not the same intimidating pitcher he was early in his career, specifically 2016.    Noah earned his first and only All Star selection in 2016.  He was #8 in CY voting, and received MVP votes. 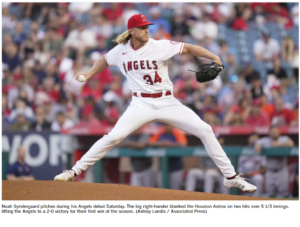 LAA traded Syndergaard at the deadline to Philadelphia for catching prospect Logan O’Hoppe; #64 in MLB Pipeline Top 100 prospects, and Syndergaard was back in the playoffs, and pitched in his 2nd WS.  He was on the losing end both years (2015 and 2022), and now hopes to help LAD win the 2023 WS. 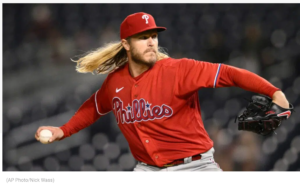 In 2022, Noah had 24 starts and 1 relief appearance for a total 134.2 IP: 3.94 ERA.  Seemingly a nice production after 2 years of no pitching.  Syndergaard was acquired to somehow replace Tyler Anderson’s 178 IP.  After last season, and with pitching Yoda Mark Prior, coupled with Noah’s competitive nature, I think there is a good chance Syndergaard can achieve TA’s IP.

What the Dodgers hope with any adjustment is an increase in Thor’s velo. His velo for his fastball and slider are 4-5 MPH slower than at his peak. If he can increase that velo, he should be able to improve on his 2022 metrics.  The Dodgers have had good success with increasing velo with other reclamation projects.  Will Noah Syndergaard be the next?

Thor certainly has a history of injury, like Tony Gonsolin, Dustin May, and Clayton Kershaw.  So while there is reason for positive expectations with a top rotation, there is also reason for trepidation.  The Dodgers will have the depth to manage injuries.  In addition, we still have no idea if the Dodgers are done with pitching additions.

One other facet about the Syndergaard signing is that Thor has an edgy side about him.  He is not the laid back stoic personality much like most of the current LAD roster.  His take on Carlos Correa’s comments about Derek Jeter not deserving any of his GG will lead to some interesting confrontations when LAD meets up with SFG.  Noah is another social media favorite and a character.  But he is nothing like Trevor Bauer.

I do not for a minute believe this is the last player personnel transaction we see from AF/BG.  Will there be more FA signings?  Or will there be trades? Or will it be both?  Stay tuned.

Noah Syndergaard on why he chose the Dodgers in free agency #MLB pic.twitter.com/8niiF0zvs2

I think I know what I’m looking at here, a lot of information to digest but there’s also projections that could improve with Dodger coaching. Fangraphs says he could throw 150 innings of 4.0, which could be acceptable for a #5, but improvement in spin rotation, and work on heat map locations, heat up, breaking balls down, things Prior is an expert at improving, could drop that ERA into the mid 3’s. 150 innings of Thor? Yoiks.

This is an exciting pick-up.

Welcome to LA Thor! I think this is a great signing by the Dodgers and it did not break the bank. I also believe that somewhere along the line, the Giants are going to regret giving Correa that long of a deal. He will help their offense for sure. Dodger rotation goes from being lefty heavy, to three righthanders in the rotation.

I will be 88 when that contract expires. I already could care less about how good of a player Correa is by then. Bear, you’ll be near 100 ﻿ 😊 ﻿

Eerily, this was the very first contract that I have ever attached what my age would be when the contract ended. I will be 84. Suddenly mortality thoughts kick in.

Relax Jefe, no one gets out alive.

I’ll be 84 when Mookie’s contract expires. Just another reason why I’m looking more closely at this year. One year at a time.

The Giants need a few players to step up. Crawford might but they still have 4 players in their lineup that are less likely to step up. Their 3, 4, and 5 hitters are decent with Carlos, Joc, and Mitch assuming Mitch is healthy.

Dodgers supposedly have an interest in Evan Longoria. Why, other than his relationship with AF< I have no idea.

Me either. Justin Turner projects higher. Is Longoria that much cheaper?

By itself, I have no problem with getting a veteran RH bat for the bench. But that would mean that the Dodgers do not re-sign JT. I do not know the cost of either, but Longoria better be at the Chase Utley level. I think LAD and JT are waiting for the Bauer decision.

The Dodgers probably have a Facilities Manager that oversees a lot of staff and maintenance projects that makes maybe $150,000 that will be thinking about a $2,000,000 player mostly sitting on the bench.

I’ll need you to go back through that list and give me individual WAR predictions and totals for all those players.

Based on last year of for the last three?

Another shortstop is available. Let the bidding begin.

Pictorial tribute to Cody Bellinger. You will be missed #35.

I agree with those who feel that AF and JT are just waiting for the Bauer decision in order to figure out how to structure JT’s contract. I’ve got to believe they’ve reached a verbal agreement that he’s coming back or he probably would have signed elsewhere by now. If he waits too long, those other opportunities will be off the board.

Some interesting math involved in the Bauer situation. If he isn’t allowed to play this year, the Dodgers save somwhere between 30-35 million (not sure exactly how that’s figured). If he’s allowed to play and opts out, they save between 15-20 million. That might mean that they would be willing to pay half his salary in a trade scenario if they really don’t want him on the team. Still far better than eating the entire 30-35 million and also losing a pitcher from the rotation.

I happen to feel we’d be better off keeping him, but how about some trade ideas with the thought that we’d pay half of his salary. Who would take him and what would they be willing to give back?

Dodgers traded for utility infielder Yonny Hernandez for cash considerations. He has a MiLB career of 2,202 PA, 307K, and 325BB. Good bat to ball skills but not a productive offensive player. I do not understand this move unless there are others in the works. What does this say about Jacob Amaya? While I have no problem with competition, I do not see any kind of improvement here. Hernandez was DFA’d by Oakland but the Dodgers have a place for him? Just a quick observation.

Probably going to try to sneak him through waivers so they can use him as an infielder at OKC. He plays all over the infield so this might not mean anything about Amaya.

I really hope that they have Amaya with the big club all spring and give him a chance to force his way on to the roster.

Hernandez still has 2 options, so he does not have to be waived unless the Dodgers need a space on the 40 man. Once Syndergaard is officially signed, the 40 man will be filled.

I would hope they would need that 40th spot for someone more able to contribute than Mr. Hernandez.

There have to be trades in the works, right? Otherwise, Jake Reed, Yonny Hernandez, and Justin Bruihl are in line for DFA. Justine Bruihl, Jorbit Vivas/Eddys Leonard have to be trade candidates, right?

Josh Thomas at Dodgers Digest had a write up today on catcher Yeiner Fernandez (whom I’ve heard of and really like) and Luis Valdez, a young pitcher I had never heard of. They are part of a series on what he calls helium prospects, guys he’s tried to identify before they become mainstream top 30 Dodger prospects.

There were a total of 6 players including the two mentioned above and Doncon, Alex Freeland, Heubeck and River Ryan. He includes videos and stats and I must say that every one of those 6 players seems very promising, at least at this stage of their career.

LA Dodgers on December 14 – And Where To Go From Here
Scott Boras Has Done It Again
wpDiscuz
32
0
Would love your thoughts, please comment.x
()
x
| Reply