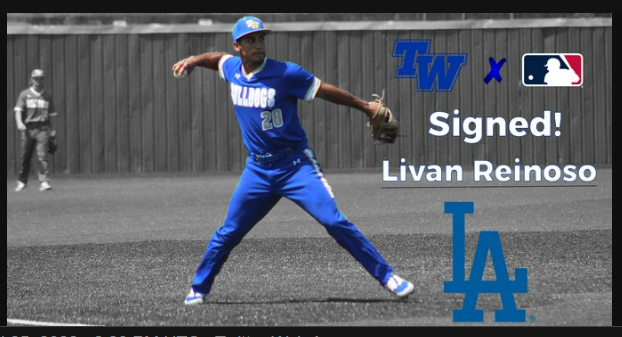 The Duke of Dingers is headed to the @Dodgers.

The 6’1”/185 lb. right-handed hitting Livan Reinoso was born in Paterson, New Jersey and MaxPreps information indicates he grew up in Hazelton, PA and attended Hazelton Area High School. His high school statistics, especially in his junior high school year, far exceeded the national average listed by MaxPreps. His two year high school triple slash was .458/.513/.656 along with an 1.169 OPS.

“This award could not go to a better young man. First team all region is a great honor and he is deserving of this award,” said Erskine Baseball Head Coach Mark Crocco. “Livan is a relentless worker on and off the field. His dedication to a standard of excellence has continued to be recognized by so many. We are extremely proud to have him apart of our Erskine Baseball Family.”

Reinoso’s  2022 season was spent at the hot corner with the Tennessee Wesleyan Bulldogs of the National Association of Intercollegiate Athletics. He kept hitting at Tennessee Wesleyan — .417/.495/.921 with 32 home runs and 95 RBI in 64 games — and earned NAIA All-American honors. His 32 homers led the nation  while also leading all of NAIA ball with 95 RBI’s, ranking 4th in the country with his 100 hits and 5th with 82 runs scored.

On June  7, 2022 the NAIA announced the members of the Avista NAIA World Series All-Tournament Team on the last day of play in Lewiston, Idaho. Livan Reinoso  made the team at third base.

Congratulations Parker, Brax, and Livan! NAIA All Tournament Team, as a result of your performance in the 2022 NAIA World Series. So proud of each of you. pic.twitter.com/LhPc7HrNhy

In a do-or -die game in the NAIA World Series he came up with a a two-strike, two-run home run to right-center field.

“I was looking for a fastball, and obviously I got it later in the count,” Reinoso said. “I got two strikes and knew I had to shorten up. That’s what I did — got the home run.”

Livan Reinoso lives for the game of baseball. During both the 2021 and 2022 seasons, following college ball, he played for the Savannah Bananas of the Coastal Plain League where he continued to hit. Over a combined  54 games with Savannah  he slashed 353/.432/.507.

The Bananas are known for their wild celebrations working to make baseball fun for the fans. Reinoso bought into their celebratory mode after scoring the first run in a game. All sorts of unique celebrations happen and Reinoso came up with his own on June 5, 2021.

In celebration of scoring the first run in that game he crossed home plate and immediately took off down the right-field line refusing to stop along the way. He kept running in a Forrest-Gump-like fashion all the way down the line, sprinting and leaving his teammates behind as he exited into the right-field corner.

There is another side to Livan Reinoso besides being a silent slugger and a very respectful, appreciative young man. He has a fraternal twin brother, Dayan, and both are still chasing their baseball dreams. Dayan signed with the Angels in 2021 and is pitching with the Inland Empire 66ers.

There is still another side to Livan Reinoso. Who knows, maybe a Kenley Jansen or Pedro Baez side.

Reinoso also pitches and has been clocked at 97 mph. Now he hasn’t pitched much but what he has done may have caused the Dodgers to take notice. With Tennessee Wesleyan in 2022 he made 14 relief appearances and pitched a total of 15 innings. He posted a 2.40 ERA and a 1.00 WHIP along with 27 strikeouts and 10 walks.

He debuted this year with the ACL Dodgers on August 12 against the ACL Padres. He did so on the mound in the seventh  inning. To date he has made two appearances pitching two innings with no hits or runs while walking two and striking out two.

A 24 year old in the Arizona Complex League, a step below low A ball, has hit all his life and all of a sudden he gets his chance as a relief pitcher. Questions abound.

Technically, baseball age he is still 23. But yes, a tad old for a Rookie Complex League. But this looks very much like the exact opposite of a “can’t miss” pitcher like Yadier Álvarez. This is what AF does. He looks for low risk HIGH reward players. Who says he cannot be the next Kenley Jansen or Pedro Báez? Or River Ryan? Or Joel Ibarra? The odds are stacked higher against someone like Livan than almost every player signing their first professional baseball contracts. But for me, these are the players I want to root for. With his hit potential, maybe he will be more like LAA’s Michael Lorenzen.

2. If he has a future in professional ball it seems as if it will be as a reliever
as the path forward is much faster for relief pitchers than position players.

3.He doesn’t have to hit Low A pitchers as It seems his path has been set as
a reliever but I would not be surprised if he could.

4.He has played primarily as a third baseman. I expect he can stop a ground
ball. He is a good athlete.

The odds are definitely stacked against him as he does turn 24 in a few days. However, I would never bet against a guy who loves the game, is of high character or bet against the human spirit. His twin brother has followed a very similar route and is pitching at the A level with Inland Empire.

I am hoping with the ACL wrapping up soon Livan Reinoso will get to pitch a few innings with A-level Rancho Cucamonga. Hopefully against the 66ers with whom the Quakes have six games left starting on August 30.

Watching some LLWS. Some of those kids are huge. And some throwing the equivalent of 93+ mph. Pretty sure I couldn’t hit it.

Wasn’t there also some guy named Yordan in that group?

Thanks for the write up Harold. I took an immediate liking to Livan on draft day when I saw some of the info you’ve included here, but I’m happy to learn more about him.

How can you not like a former Savannah Banana?

I really hope they don’t just try to make a pitcher out of him. Seems like he has some real hitting tools they should try to develop.

As I surmised after his last outing, Pedro Báez has been released.