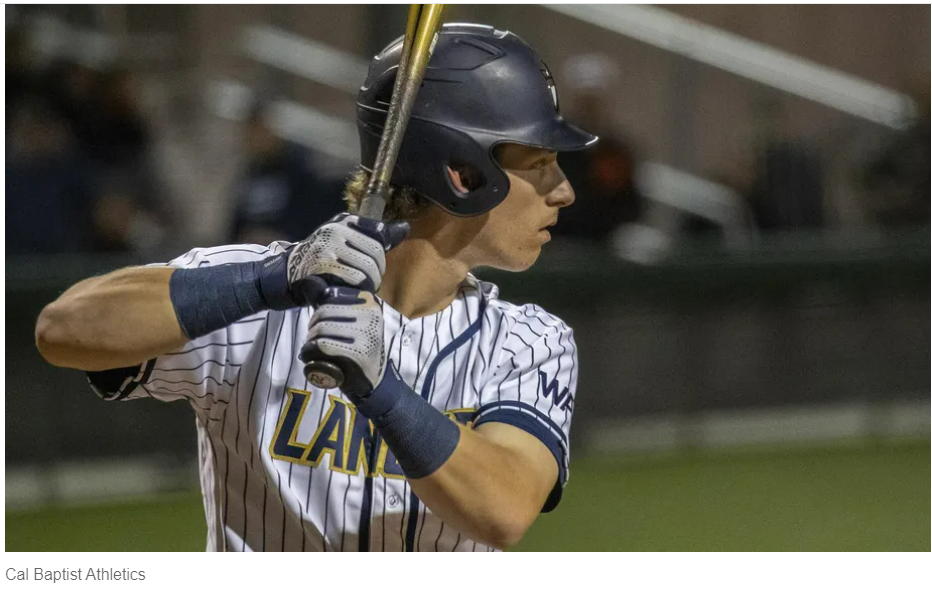 After a 5-1 start, the AAA affiliate has now lost 3 in a row. After allowing one unearned run in 4.0 IP in his first start, Beau Burrows was rudely greeted by leadoff hitter Eguy Rosario slugged his first HR of the season.  The HR was followed by singles from Luis Campusano and Taylor Kohlwey.  After a ground out, Aderlin Rodriguez hit a 3-run bomb for his 2nd of the year, and a 4-0 lead after 5 batters.  Burrows settled in for nothing else allowed in 4.2 IP; 74 pitches/41 strikes.

However the Dodgers were shut out in 5.0 innings on 3 hits.  The Dodgers scored an unearned run in the 6th on a 2 out walk (Kevin Pillar), a catcher throwing error trying to pick off the runner, and a run-scoring single by Ryan Noda.

But the Dodgers got off the floor in the 8th.  With one out, Miguel Vargas walked.  After Jake Lamb K’d for out number 2, Pillar was HBP, Ryan Noda walked, and Jason Martin walked to bring in the first run.  That brought up Tomás Telis who cleared the bases with a single and fielding error, and the Dodgers took a 5-4 lead.

Meanwhile, Sam Gaviglio worked a scoreless 6-7-8 inning.  He allowed a leadoff single and walk in the 9th, struck out Nomar Mazara, and was relieved by Reyes Moronta.  On Moronta’s 3d pitch, Aderlin Rodriguez hit his 2nd 3-run HR of the night, and the Chihuahuas had a walk off 7-5 win.

The Dodgers had a total of five hits on the night (all singles), three by Telis.

The Drillers were the first team to draw blood, as they coerced a Michael Busch walk, a Andy Pages HBP, and a Justin Yurchak single, the Drillers had a 1-0 lead.

The lead was short-lived as Gus Varland had a very rough 3rd inning.  The first four batters got on base and scored.  Walk, single, run scoring single, 2-run double, and Varland was done.  Tanner Dodson relieved Varland and issued a WP putting a runner on 3rd with one out.  The fourth run scored on ground out, and the Sod Poodles had a 4-1 lead after 4.

Dodson pitched a scoreless 5th and Zac Plunkett came on in relief in the 6th.  After two quick outs, Plunkett allowed a single, he then surrendered a HR to Nick Dalesandro (1), and the lead increased to 6-1 after 6.

Tulsa started to fight back and got one back in the 8th with a one out single by Mike Busch and a two out double by Justin Yurchak.  The in the 9th, Ryan Ward led off with a HR (1), And then the Drillers had a look.  After one out, Kody Hoese singled.  After the second out, James Outman walked, Michael Busch singled in Hoese for the second run.  After a walk to Pages to load the bases, Justin Yurchak strode to the plate looking for a walk off XBH.  Instead he popped out to 3B in foul territory to end the comeback.

Tulsa had 8 hits on the night with Busch and Yurchak getting two apiece.  Tanner Dodson was the only Driller pitcher to not allow a run, but he did give up one hit and 2 walks in his 2.0 IP.

After a nice start to the season, Andy Pages has hit a rough patch going 1 for his last 11.  Pages is too good of a hitter to stay in this slump for an extended period.

First game of the night has come to an end with the Loons losing to the Peoria Chiefs 5-2.  The Loons were first on the board in the second when Imanol Vargas was HBP, and came home to score on a Zac Ching double (1).

The Loons knotted the score with one in the 4th.  Zac Ching singled with one out and moved to 3rd on a Kekai Rios double.  Jonny DeLuca put the bat on the ball and hit a soft grounder to 3B that scored Ching with the tying run.

The teams traded zeros until the bottom half of the 7th.  With Jose Hernandez pitching his second inning, he allowed a leadoff double by Noah Mendlinger.  After a strike out, Masyn Winn tripled him home.  Aaron Antonini singled home Wynn.  After a passed ball, Antonini scored on a single.  Three runs across and after 7 innings, the Chiefs had a 5-2 lead.

The Loons could not answer, and suffered the 5-2 loss.  The Loons had six hits on the night with Ismael Alcantara and Zac Ching having two hits apiece.  LHRP, Julian Smith, was the most effective pitcher on the night.  He allowed 2 baserunners via BB and recorded 4 Ks in 2.0 IP.  Cole Duensing had a 1-2-3 9th with a K.

Who would have thought it?  The two 40 man roster players on the A+ Loons have had a very rough start.  Over their first 6 games, Eddys Leonard is 0-15 and Jorbit Vivas is 2-16.  One of the areas development people and scouts want to see is how players respond to slumps.  These two are talented hitters, and should come out of it soon enough.

21-year-old RHP, Kendall Williams, who was acquired from Toronto in the Ross Stripling trade, was the starting pitcher.  After a scoreless first two innings, Kendall allowed a pair of singles, a force out put runners on 1st and 3rd with 2 outs.  Unfortunately, Kendall unleashed a WP and a run scored, giving the 66ers a 1-0 lead.

Down 1-0 in the 5th, Williams allowed a leadoff single to Vojtech Mensik who stole 2nd.  After a strikeout and ground out, Mensik was on 3rd with 2 outs.  He got what he wanted, a ground ball to get out of the inning.  However, Yanel Luis Diaz misplayed the grounder for an error, and the run scored. After 68 pitches/49 strikes Williams was sent to the showers. Octavio Becera came on in relief to get the final out of the 5th inning.

Diego got things started in the home half of the 5th with the first of three straight walks (Alex De Jesus and Damon Keith) to load the bases.  Yunior Garcia stroked a one out single to score both Cartaya and De Jesus to tie the game at 2-2.  After a strikeout, Julio Carrion singled to score Keith giving the Quakes their first lead.  Finally Kenneth Betancourt singled to score Garcia, and the Quakes went into the 6th with a 4-2 lead.

Unfortunately, Inland Empire did not go away.  Ronan Kopp relieved Becera in the 7th.  He got the 1st out of the inning, but hit Starlin Gill with a pitch.  Kopp had a WP and recorded a K for the 2nd out.  After a passed ball by Cartaya, Kopp unleashed his second WP of the inning, and the 66ers cut the lead to 1.

Carlos De Los Santos relieved Kopp in the 8th with one out and 2 inherited runners.  De Los Santos got out of the inning stranding both inherited runners.  But the 9th was a different story.  He allowed a leadoff single to Werner Blakely who then stole 2nd.  After a ground out, Blakely moved to 3rd, and scored on an Arol Vera single to tie the score.

In the bottom of the 9th, Julio Carrion had a one out double, but got thrown out when trying to go to third on a ground ball.

In the Quakes half of the 10th, speedster Jake Vogel was the ghost runner, and Diego Cartaya due up.  Diego was promptly intentionally walked.  Alex De Jesus struck out for the first out.  No matter.  Burgeoning star Damon Keith came to the plate, and on a 1-1 pitch lined a single to left and Vogel raced home with the walk off win.

Bad night for the affiliates, But at least the big club won!

You are right, the Affiliates had a rough one.

But I am very impressed thus far with Damon Keith. He is a loooonnng shot, but he is making every effort to get noticed.