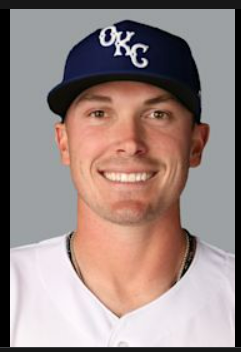 The Dodgers entered the game tied with Round Rock Express for the division lead after splitting the first four games with the Express.

Right-hander Beau Burrows started for the Dodgers. Back on May 31 Burrows threw 5.2 scoreless innings against Round Rock in an 8-0 Dodger win. Heading into the bottom of the fifth inning on Sunday Burrows had held the Express to one run on five hits and two walks. Following a walk in the fifth he had worked with runners on base every inning. The one run he allowed was a home run to former Dodger Zach Reks.

Right-hander Yadier Alvarez took over in the bottom of the sixth inning and stranded a runner at third base following a lead off double.

Alvarez was followed by Reyes Moronta who retired the Express on 15 pitches, including two strikeouts.

Mark Washington became the Dodgers fourth pitcher of the afternoon. The 6’7”/ 205 lb. right-hander struck out one, gave up an infield single and erased that runner with a ground ball double play.

Carson Fulmer closed out the bottom of the ninth inning but not before giving up a run on two hits.

The Dodger bats were rather silent through five innings  recording only three hits, one by rehabbing Max Muncy. In the top of the sixth inning OKC broke the silence with a Jake Lamb single and back-to-back home runs by Ryan Noda and Jason Martin giving them a 3-1 lead. An insurance run came across in the top of the ninth inning as Andy Burns walked and worked his way around the bases scoring on a wild pitch.

Beau Burrows had to battle through his five innings pitched but he battled well.

Another good day on the mound for Beau Burrows.

He allowed just 1 run over 10.2 innings with 13 strikeouts during 2 starts in this series. pic.twitter.com/EERmwXQsM8

The Drillers are currently one-half game behind the division leaders Wichita Wind Surge. As the schedule would have it they start a seven-game series at home against the Wind Surge on Tuesday. The series include a make-up game from an earlier postponement.

Saturday night’s game between the Tulsa Drillers and the San Antonio Missions was postponed in adherence to Minor League Baseball’s health and safety Covid-19 protocols due to health issues within the San Antonio roster. Sunday’s game was also postponed.

A while back the Loons had crept within 3.5 games of the division leading Dayton Dragons. However, losing four out of six to the South Bend Cubs at the end of May has set them back to 7.5 games behind Dayton. The good news is that starting on Tuesday they have a chance to make up ground as they start a six-game series in Dayton.

Sunday’s game started well for the Loons although the rain threatened to cut the game short.

Right-hander Kyle Hurt started for the Loons and had his stuff working for him as he pitched hitless ball for the first five innings on 65 pitches, 45 of them strikes. He did walk two but struck out six. The game was delayed by rain following the completion of five innings making it an official game if play could not be resumed. Play did not resume.

The Loons bats were also hot scoring eight runs in the first three innings. Diego Cartaya scored the only run in the bottom of the first inning. Following his double he advanced to third on a ground out and scored on a wild pitch.

In the bottom of the second inning the Loons came up short of the cycle by a home run. Alex De Jesus led off the inning with a triple followed by a Jonny DeLuca RBI double. Deluca scored following an Imanol Vargas single and an error on a Kekai Rios ground ball. Eddys Leonard brought both Vargas and Rios home with his team leading 15th double of the season.

The Loons tacked on three more runs in the bottom of the third inning thanks to some help by the Fort Wayne pitchers. Imanol Vargas homered to right center field giving the Loons a 6-0 lead. Two more runs came home on a Jorbit Vivas single following a HBP and two walks.

Four different Loons had two hits but the accolades go to Kyle Hurt who had perhaps his best outing of the season matching his five-inning scoreless outing back on May 25.

This one’s official! Big win for the Loons.

Kyle Hurt tossed 5.0 no hit innings for Great Lakes in the rain, via pxxp, the FB was up to 97 anyway. He walked two and struck out 6 (5/6 ⬇️, one wasn't shown) pic.twitter.com/y0KPXJbgNm

The news of the day was most likely that Clayton Kershaw made a rehabbing appearance. He pitched four innings throwing 59 pitches, 44 for strikes. He gave up three hits and one run while striking out seven and walking one.

Huei-Sheng Lin claimed the win with 3.1 innings pitched allowing just one run on one hit along with two walks and five strikeouts.

Martin Santana got credit for a hold while striking out one in his two-thirds of an inning.

Madison Jeffrey closed out the ninth inning in style with all zeroes.

The Quakes struck for six runs on 11 hits along with six walks.

In the bottom of the first inning Julio Carrion doubted following a Jake Vogel single. Vogel was thrown out at home but Carrion was able to score on an ensuing wild pitch.

The Quakes struck again in the bottom of the sixth inning. Julio Carrion walked, Damon Keith and Luis Rodriguez singled loading the bases. One run scored on a double play ball and another on a Yunior Garcia single.

Rancho Cucamonga salted the game away in the bottom of the eighth inning. Luis Yanel Diaz and Kenneth Betancourt singled and with two out and two strikes on him Austin Gauthier coaxed a walk loading the bases. Jake Vogel, who had a game, cleared the bases with a triple to center field.

Jake Vogel had four hits on the day along with his three runs batted in is the unanimous choice.

Post-game press conference with the legend himself. pic.twitter.com/Kig4uGQBWu