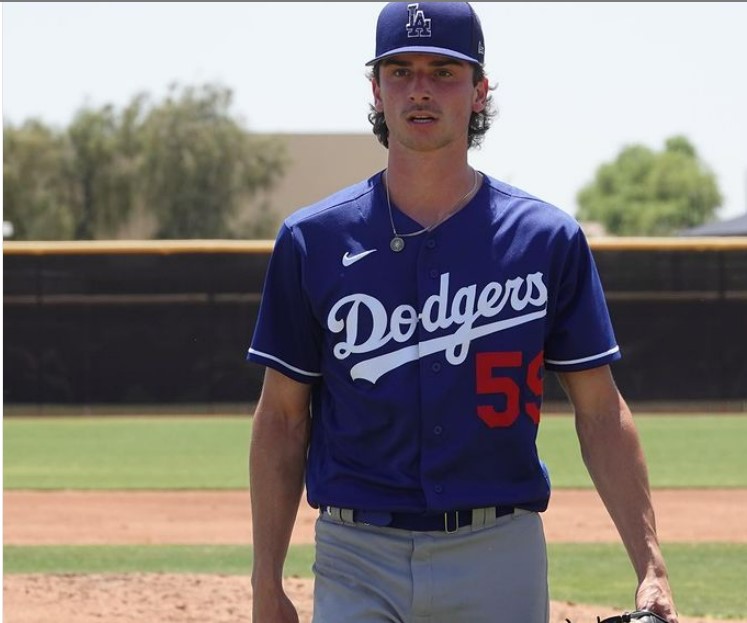 Right-hander Peter Heubeck made his long-awaited debut with the Rancho Cucamonga Quakes on Thursday, June 2 against the Lake Elsinore Storm. I say long-awaited as he did have a very successful debut with the ACL Dodgers last September pitched four innings over two appearances allowing just one hit while walking two and striking out nine.

Heubeck, still 19, was born on July 22, 2002 in Baltimore, Maryland and played high school baseball with Gilman School in his hometown of Baltimore.  Gilman is an All-Boys Private Independent School.

At Gilman The 6-foot-3, 170-pound senior compiled an 8-2 record on the mound with 101 strikeouts and a 1.20 ERA in 64.1 innings. He posted a WHIP of 0.82 and held opposing batters to a .115 average while leading the Greyhounds to the conference championship.

Heubeck was not a sure bet to sign with the Dodgers as he had signed a national letter of intent to play baseball on scholarship at Wake Forest in the fall. The Dodgers did sign him for almost $700.000 over the posted slot value. When it was all said and done the young right-hander  was ready to pursue a baseball career and perhaps it was the drafting team that made his decision a bit easier.

“I was super excited about Wake Forest [since committing in 2019], but when it came down to it, I feel like the Dodgers are the best organization in baseball with player development, especially for pitchers. All the people I’ve talked to so far there are super good people and I felt it was an opportunity I couldn’t pass up,” Heubeck said. “It’s incredible. I’ve been dreaming about this my whole life really. I know it’s going to be a grind, but I’m so excited to go after it.”

Perhaps the die was cast well before the draft. Heubeck, as a youngster, had been surrounded by baseball and good baseball people. His father, Rob Heubeck, was one of the coaches at Gilman so Peter  grew up around baseball and became immersed in it. How could he not when spending time at the park in Baltimore with head coach Larry Sheets, his son Gavin and Ryan Ripkin and his father, Cal Ripkin Jr.?

And maybe it just came naturally according to his father.

“I think it’s just the fact he loved it and could never get enough of it. He’s always been a student of the game and just soaks it up,” Rob Heubeck said. “He never had a pitching lesson in his life. It was always just watching and emulating and working hard. I never had to force him to go out and play baseball — he wanted to do it all the time.”

Former major leaguer and Gilman head coach Larry Sheets was as expected, pleased but not surprised, by Heubeck’s selection in the third round of the draft.

“Peter is one the hardest-working and most dedicated players I have ever coached. He is a bulldog on the mound and nothing seems to rattle him. He’s the guy you’d want on the hill to close out a championship game, which he did. His numbers speak for themselves, but his desire can’t be fully measured by those numbers.” [quote credit to Baltimore Sun]

Peter Heubeck was especially pleased to be drafted by the Dodgers, not only for the development program he knew was in place, but also for other reasons.

Growing up in Baltimore Heubeck was naturally an Orioles fan but at the same time he was a Dodger fan, no doubt because of his mother and helped out by MLB.TV,  which likes to black out games. Orioles games were blacked out so as a youngster he started watching Dodger games together with his mother. She is a huge Dodgers fan and they spent countless hours playing catch in the backyard and watching Dodgers games, so getting drafted by them was an awesome experience. One expects Mom is an even bigger Dodger fan now.

Heubeck was watching the draft with friends when he received a phone call from his agent telling him the Orioles were going to draft him. Being drafted by a hometown team definitely would be exciting.  What could be more exciting? How about receiving a second call moments before his name was called telling him it was the Dodgers, not the Orioles, who would call his name.

However, the day wasn’t over for Heubeck just yet. After a Zoom meeting with some of the Dodgers’ staff, Heubeck was told to watch out for a FaceTime chat later in the day. This definitely  was the icing on the cake and cemented in his mind  what he already knew about the Dodgers player development program. Can you imagine this happening to an eighteen-year-old on the east coast three time zones away from Los Angeles?

At the appointed time Peter Heubeck entered FaceTime and met two guys for the first time. Those guys, Clayton Kershaw and Walker Buehler.

“It was really amazing,” Heubeck said of meeting the All-Star pitchers. “We had a neat conversation about what it’s like going through the organization and just talking baseball. They’re just great guys, super nice, and it was crazy.”

“That was really special! I mean, I was in shock first of all because I have always looked up to those 2 guys.  I watched Walker Buehler all the way back to his Vanderbilt days and Clayton Kershaw is a Hall of Famer so that was awesome. The thing that stood out is that those 2 guys are such nice guys and that has carried over into everybody else in the organization.  The whole organization is full of good people and good players and the coaches really care about you and your development so that’s really nice.”

So what does Peter Heubeck have to offer the Dodgers? In reading about him I suspect the character of Clayton Kershaw and Walker Buehler. Beyond that we have scouting reports. I will list just two. One is from Dodger Polk Report which provides the following interview.

“Now that you’ve seen how he tunnels his pitches, let’s back up and take a look at each pitch.  Heubeck has both a 4 seam that he uses up in the zone that has a really good “riding” effect and a 2 seam that he uses down in the zone that has good vertical break and sink.  The “riding” effect simply means that, because the ball has such a high spin rate, it doesn’t drop much, so it appears to be rising to the hitter.  So, he can “ride” the ball, sink the ball and, in doing so, change the eye levels of the hitters.  Recently, Heubeck has relied more on his 4 seam because the pitch has so much “ride” to it, and it’s a great pitch to tunnel his curveball and changeup off of.”

“Heubeck is a thin, projectable 6-foot-3 righthander who keeps trending up. His fastball sits 90-91 mph with elite riding life at the top of the strike zone and should tick up as he fills out physically. Heubeck complements his fastball with a plus, 12-to-6 curveball in the low 80s with impressive depth and power. He effectively throws his fastball up and curveball down to give him the north-south profile teams covet. Heubeck mostly relies on those two pitches but has flashed an average changeup. He has an easy delivery and a clean arm action that give him average control.”

Heubeck’s Quakes debut did not work out quite as hoped as he gave up three earned runs in 2.1 innings pitched. Larry Sheets indicates that Peter Heubeck will not be rattled on the mound and I expect that  includes his Low-A debut. I’m with Larry on this one.

Excellent post on a pitcher that it seems many of us are high on. Most of the 2021 drafted pitchers will find their way to the bullpen at some point, but Heubeck is the one pitcher I feel will stick as a starter. I hope I am wrong on Bruns, but he just screams as a single inning high leverage reliever, as do Nick Nastrini and Lael Lockhart.

Last year’s draft was weird at the time, but looks ultra-promising

Promising is good. A few of the many drafted could rise to the top.

But, not this year.

Will Kershaw and Heaney be back and finish strong?

Will Anderson and Gonsolin do what neither has ever done before?

All these guys will likely need some off time down the stretch. I expect to see a few of guys we’ve been discussing here make their debuts later this summer.

I respect your comment and opinion, but I am not sure that your definition and my definition of ultra promising are the same. I only consider starting pitching as ultra-promising. The Dodgers have three pitchers in the MLB Pipeline Top 30; Maddux Bruns, Nick Nastrini, and Peter Heubeck. Other pitchers from the 2021 draft that have made some prospect lists: Emmett Sheehan, Ben Casparius, Ronan Kopp, Madison Jeffrey.

Maddux Bruns is considered to be extreme reliever risk.

Not sure I follow, but love FanGraphs. I’m just banking on the Dodgers (who see him as a starter, I’m pretty sure) having better insight

The point is of the 15 pitchers drafted and signed, two can be considered potential starters. The Dodgers drafted Bruns as a starter, so of course the Dodgers consider him a starter. I hope they are right. I have nothing to gain if he fails as a starter. But there is not a publication that follows prospects that does not consider Bruns to have huge reliever risk. They have nothing to gain by labeling him as such. Of course things can change as Bobby Miller was also considered to have huge reliever risk. Not so much anymore.

Of course those are only statistics and I have no access to LAD personnel as do Baseball America, MLB.com, FanGraphs…That is why I almost always say…”Draw Your Own Conclusions”.

Position player slots on the Dodgers don’t seem to open near as often as pitcher spots. Good to see the pither pipeline is full.

For the Mets series, the starters not named Buehler, pitched 17.1 IP

I have confidence in 3 starters, Gonsolin, Anderson, and Urias. Kershaw could be back next weekend, and he would take White’s spot. I am not sure there is a reliever I have much confidence in. Maybe Hudson and Almonte, but with some reservations. Have they been overworked in this 31-game – 30 day stretch? Perhaps. Overall, the current 9 relievers:

The team loses one reliever on June 19.

Contrary to what others may say or write, there are pitching concerns. Of course, they can be overcome, but to ignore the current trend is disconcerting. Buehler has had five rough starts in a row:

If this wasn’t Buehler, he would not be starting.

I am more concerned with Gonsolin’s IP than Anderson’s sustainability. Maybe Anderson did find something in a new (old) grip and he can sustain an excellent start.

The LAD lead is now down to 2 games over San Diego and 5.5 over San Francisco. Tatis Jr.’s return is expected right around the All Star Break.

Went to see the Quakes on Saturday. Missed Cartaya by a couple days and Kersh by one. They lost 3-2. The winning run scored on an error by Vogel. Kid hit a couple screamers right at fielders for a couple of outs. Best looking prospects I saw? Rodriguez who had two doubles and crushed both of those pitches and Keith, the SS who is very athletic.

No doubt going to A games can be fun. Hard to know who out of that large group (Quakes and Loons) is gonna make it and when. What I find myself doing is targeting who the next Top 10 players are, Kershaw, Seager, Urias, Lux, the players we won’t trade, and the ones making noise that we will trade. Long list of those around the league.

This year I want to know what pitchers will be brought up to keep this thing going through the summer months.