OKC got off the floor and scored 4 in the 9th to send the game into extra innings.  Then down by two in the 10th, OKC scored 3 in their second consecutive walk off win.

Andre Jackson has been struggling since he was sent back to OKC.  On this night, Jackson had a rough 1st inning, but then followed that with 4 excellent innings.  Jackson allowed a double and single by Corey Julks to score one run.  Julks stole 2nd base and went to 3rd on a WP.  Julks then scores on a sac fly.  Over the next 4 innings, Jackson kept the traffic to a minimum.  Never more than 1 per inning.  This was a good comeback outing for Jackson.

Daniel Zamora relieved Jackson in the 6th.  Zamora allowed an unearned run in his one inning.

Justin Hagenman went back out for his 2nd inning in the 8th and had some problems.  After the leadoff out, 4 consecutive batters reached base…walk, single, 2-run double, run scoring single.  Mark Washington was summoned to relieve Hagenman.  Washington got one out and was relieved by Dakota Chalmers who recorded the final out.

Carson Fulmer entered the 10th.  With one out, Fulmer hit a batter and walked the next batter to load the bases.  He got a ground ball, but could only get a force out.  With a runner on 3rd, a passed ball brought in the second run.

OKC got on the board with a Jason Martin HR in the second.  Down 6-1 in the 8th, B2B doubles by Ryan Noda and Jason Martin scored the Dodgers 2nd run.

Jason Martin goes all the way 🆙 to get the Dodgers on the board!

Down 6-2 in the 9th, OKC got up off the mat.  Andy Burns and Drew Avans led off with walks.  With one out, Ty Kelly singled to load the bases.  Miguel Vargas walked to force in a run.  Jake Lamb torched a bases clearing and game tying double.  But OKC could not get Lamb home.

Jake Lamb delivers a base-clearing double to tie the game in the 9th at 6-6! pic.twitter.com/d7tTZvA8BY

Down by two in the 10th, Tomás Telis singled to score the ghost runner.  After one out, Drew Avans singled to put runners on the corner.  Michael Busch came to the plate and on the 1st pitch he hit a walk off 2 run double for a come from behind win.

They come back in the 9th.

They come back in the 10th.

Michael Busch is the latest to walk it off with a two-run double!

It is hard not to take the walk off hit, but Jake Lamb had a game tying double in the 9th and had two hits to Michael Busch’s 1.

The game will now be played on Thursday (June 9) as part of a doubleheader. The first game will start at 5:00 p.m. with stadium gates opening at 4:30 p.m. with one ticket good for both games.

After a late comeback effort fell short Tuesday night, the Great Lakes Loons did not have a chance to keep momentum on their side in the second game of a six-game series. Wednesday’s contest at Day Air Ballpark in Dayton, Ohio, originally scheduled for 7:05 p.m., has been postponed due to inclement weather and wet grounds.

The two teams will play a doubleheader Thursday at Day Air Ballpark to make up the contest. Game one will start at 5:30 p.m., with the second game beginning approximately half an hour after the conclusion of the first game. Each contest will be seven innings, per rules introduced to Minor League Baseball last season.

In Peter Heubeck’s second RC start, he showed why he is highly respected.  In 3.0 IP, Heubeck did not allow a hit or run.  He yielded one walk and one HBP, and registered 5 strikeouts. This was an outstanding effort for the 19 year old.

Benony Robles followed Heubeck and pitched 3.0 innings.  2 runs scored on 4 hits.  Robles’ big mistake was a 2-run HR in the 4th, giving the Ports a 2-1 lead.

Ben Harris relieved Robles and pitched 2 perfect innings with 4 Ks.  Madison Jeffrey entered the 9th with the score tied.  He allowed a walk and SB, but got out of the inning with the score still tied.

Now trying to protect a 3-2 lead, Jeffrey started the 10th and got the 1st out before he walked a batter. Martin Santana was summoned to try and close it out.  Santana allowed back to back run scoring singles to give the Ports the walk off win.

Austin Gauthier led off the game with a single.  A ground out moved him to 2nd.  With 2 outs, Damon Keith stroked a run scoring single for a 1-0 lead.

In the 9th, Julio Carrion walked and stole second and went to 3rd when Luis Yanel Diaz reached on a fielding error.  Diaz went to 2nd on the play.  With 2 outs, Yunior Garcia singled to score Carrion, but Diaz was out at the plate.

Austin Gauthier was the ghost runner for the Quakes in the 10th.  He moved to 3rd on a ground ball out, and scored on a Yeiner Fernandez sac fly.

Austin Gauthier had three hits and scored two of the three runs.  Yeiner Fernandez had 2 hits and a sac fly.

I am going to have to go with co-players.  Austin Gauthier with 3 hits and 2 runs is Choice #1, while Peter Heubeck is Choice #2. 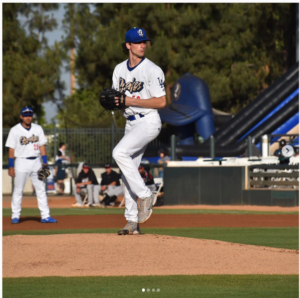 Max Muncy Hits Walk Off 2-Run HR
What Will AF and BG Look For At The Deadline
wpDiscuz
0
0
Would love your thoughts, please comment.x
()
x
| Reply