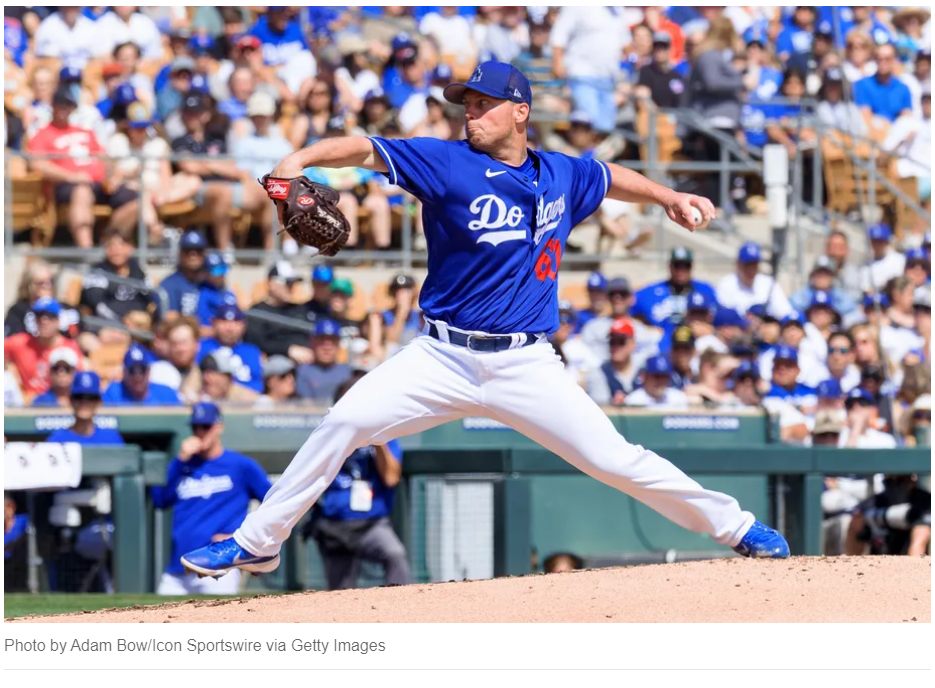 Robbie Erlin had a fantastic outing.  He had a 5.0 innings of no hit, no run pitching.  He did allow 3 BB and recorded 5 Ks.

Garrett Cleavinger relieved Erlin and continue the no-no thru 6.  In the 7th, he allowed a single and 2-run HR to give the Bees the lead going into the 9th.

Daniel Zamora gave up three runs in the 10th with 2 hits and a walk. The key blow was a 2-out, 3-run double by Kean Wong.

The Dodgers grabbed a 1-0 lead in the 4th on a Jake Lamb double, a check swing infield single for Michael Busch, and a run scoring single by Jason Martin.

Down 2-1 in the 9th, The Dodgers scored a run without a hit.  A walk, fielder’s choice dropped ball for an error, balk, intentional walk, and an unintentional walk scores the tying run.

In the 10th, with Stefan Romero on 2nd as the ghost runner, Michael Busch knocked Romero in with a single.  Jason Martin walked to put the tying runner on base.  2 strikeouts and a lineout to end the inning and game.

Michael Busch was the only OKC Dodger with 2 hits.

With 5.0 scoreless and hitless innings, Robbie Erlin is the choice.

Robbie Erlin tossed 5.0 no-hit innings for OKC, his super low spin changeup got most of his 10 whiffs, picking up 7 on 13 swings. He walked 3 and struck out 5⬇️ pic.twitter.com/kaGNxWnXfs

This was not one of Bobby Miller’s resume games, although Rick Honeycutt was in the Driller’s dugout.  He allowed 2 base runners on in the 1st (single and walk) and one in the 2nd (single).  In the 3rd with one out, Mikael Garcia had an infield single, that I am convinced would have been overturned had there been replay in MiLB.  On a pickoff attempt, Miller threw the ball into the Driller’s dugout for an error.  Nick Loftin singled (his 2nd single) and Garcia scored.  Next batter, Michael Massey, hit a 2-run HR.

In the 4th, Seuley Matias led off with a walk.  Matias moved to 2nd on a ground out.  He moved to 3rd on a single by Robbie Glendinning.  On a potential DP ground ball, the Drillers could only get one, and the 4th run scored for the Naturals.

In the 5th with one out, Bobby Miller left the game after 89 pitches (more than 20/inning), and 2 runners on.  Jose Hernandez got the final two outs with scored still tied.  However Hernandez gave up a leadoff HR to Matias for a Naturals 5-4 lead.

In the 7th, Tanner Dodson, Nick Robertson, and Jose Martinez all went to the mound for the Drillers, and none pitched well.  At the end of the inning, 13 batters came to the plate, and 8 scored.

Austin Drury entered the 8th and hit the first batter he faced.  He got a ground ball force out and a ground ball DP to end the inning.

Guillermo Zuniga relieved in the 9th, and struck out the side.

Dodgers #4 prospect Andy Pages just hit his 9th homer of the season. This is also his 3rd homer in the last 4 games, as Pages' power stroke is heating up #AlwaysLA pic.twitter.com/eyza1oecDm

Brandon Lewis hit a LONG home run for his 4th this year pic.twitter.com/i2jF3R4GEp

In the 4th, down 4-2, with one out Ryan Ward doubled. Leonel Valera hit an infield single, and Ward stayed at 2nd.  On a WP, both runners moved up and scored on a James Outman double to score the tying runs.

No Driller had more than 1 hit.

Of the six Drillers who got hits, James Outman had 2 RBI’s to get the claim.

It's a team sport for a reason! Great cleanup work from @james_outman to bring @rwardo12 and Leonel Valera home 🤙 pic.twitter.com/LChd6BX19d

Lael Lockhart started for the Loons and completed 5.0 innings.  For 4 of the 5 innings, Lockhart was outstanding.  But it was the 2nd inning that was a problem for Lockhart.  He gave up a single that was erased on a pickoff.  He yielded another single who stole 2nd and moved to 3rd on a balk.  The next batter walked, which did setup a DP. Unfortunately the ground ball only got a force out and a run scored.  A second walk and third single scored a second run and gave the Dragons a 2-0 lead after 2.

Antonio Knowles relieved Lockhart in the 6th and got out of the inning even with a pair of base runners.  In the 7th, Knowles yielded a single.  The runner moved up to 2nd on a WP.  With 2 outs, Adam Scoggins came in to relieve Knowles.  Scoggins gave up an infield single and WP of his own to allow the tying run to score.

In the 8th, Scoggins was still not sharp as he allowed a single and walk to the first two batters of the inning and was pulled for Cole Duensing.  Duensing got the 1st out on a sac bunt, and then K’d the next two batters to get out of the jam.  He retired the side in order in the 9th with 2 more Ks.

In the 10th, Braydon Fisher came in to relieve.  With a runner on 2nd, he struck out the first batter.  Gave up the intentional walk, and then proceeded to strikeout he next batter and coax a flyout to end the inning.

In the 10th, with a 4-3 lead, Fisher made it exciting by throwing a WP to put a runner on 3rd with no outs.  He then struck out the side to end the game for the victory.

In the 3rd, Imanol Vargas and Ryan January both walked.  Ismael Alcantara singled and Vargas scored on the single, and January scored and Alcantara moved to 3rd on the fielding error.  Jorbit Vivas doubled to plate Alcantara and a 3-2 lead.

The score remained tied until the top of the 11th.  Eddys Leonard was the ghost runner and moved to 3rd on a ground out.  José Ramos singled Leonard home and the 4-3 lead, which became the winning score.

José Ramos had a pair of hits.

It is tough enough to keep one extra inning scoreless, but two, and with 5 K’s is special.  So Braydon Fisher it is.

Braydon Fisher continued the clutch relief pitching for Great Lakes, pitching a scoreless, hitless 10th and 11th, despite having a runner start on 2nd in both frames, and he picked up the W. FB was 95-96 t97 ⛽️

Here's his 5 Ks⬇️(that 🔥 when he slams the door tho!) pic.twitter.com/DvDrK0qlBY

Roque Gutierrez pitched the 5th.  He allowed a leadoff HR.  That was followed by a HBP, a fielder’s choice dropped ball, double to score 1 and put runners on 2nd and 3rd with no outs.  Gutierrez got one out with a K, but a 3rd run of the inning came on a sac fly.  Gutierrez gave up the three runs the Quakes scored in the top of the 5th.

Martin Santana relieved Gutierrez in the 6th and pitched an excellent 2.0 innings in relief.  He allowed a single with no walks and 2 K’s.

Osvanni Gutierrez followed Santana to the bump in the 8th.  Unfortunately the results were not the same.  A walk, single, walk loaded the bases.  A single brought home 2 runs and left the potential tying and go-ahead runs on base.  Ben Harris entered and struck out 2 batters to end the threat.  Harris struck out the side in order in the 9th to get the save.  Faced 5 batters and got 5 K’s.

In the 5th, the Quakes opened the lead to 7-1.  Yeiner Fernandez doubled and scored on a Gaige Howard single.  Diaz reached on a throwing error putting runners on 2nd and 3rd.  Yunior Garcia stayed hot hit a 2 run scoring single.

In the 9th, Luis Rodriguez opened the inning with a single that was followed with a pair of walks by Gaige Howard and Luis Yanel Diaz to load the bases with no outs.  Yunior Garcia doubled home Howard and left runners still on 2nd and 3rd.  Diaz scores on a WP and Garcia moved to 3rd.  Garcia scores on a Hector Martinez sac fly.

Yunior Garcia had three hits and 3 RBIs.  Gaige Howard had 2 hits, 2 BBs, and 4 RBIs, Yeiner Fernandez and Austin Gauthier also had a pair of hits.

With three hits and three RBIs, Yunior Garcia is an easy choice.  But so is Gaige Howard with 2 hits, 2 BBs, and 4 RBIs.  But the Player of the Game goes to Ben Harris who struck out the five batters he faced all the while leaving the potential go-ahead run on base in the 8th. 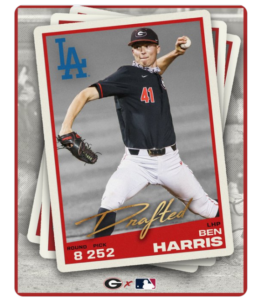 If you are talking about Miller, it is his fastball that was a problem. Like Bazooka, hard but not much movement. Or at least from what I could tell from a computer screen. There were a couple of RH hitters that turned on his fastball.