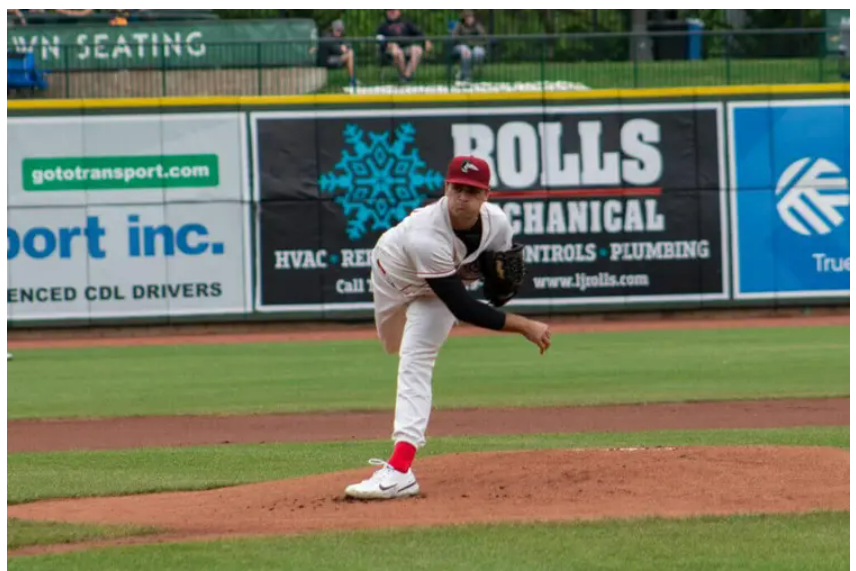 Andre Jackson returned from the Development List, but his problems continued.  In 3.0 IP, he allowed 2 runs on 4 hits and a BB.  Jose Adames followed and in 0.2 IP he allowed 2 runs (1 earned), on 1 hit and 2 BB.  4 OKC pitchers finished the final 5.1 scoreless innings.

In a AA bullpen game, only the opener Nick Robertson pitched without surrendering a run.  Staked to a 3-0 lead, Clayton Beeter pitched 0.2 innings in the second with 30 pitches.  2 runs on 1 hit and 3 walks.  Both outs recorded were strikeouts.  The next 3 pitchers allowed 4 runs on 6 hits, 3 BB, 1 HBP.

Offensively, Jonny DeLuca continued his hot start at AA with a 2-5 night.  DeLuca singled in the first, stole 2B, and scored on an Andy Pages single.  Ryan Ward followed with had a 2 run HR (18) in the first.

Nick Nastrini (Pictured) showed why he appears to have quite a bit of helium in the player projection charts.  He started and pitched 6.0 scoreless innings (84 pitches – 14 per inning).  He allowed 4 hits and 1 BB to go with 7 K’s.  Cole Percival and Braydon Fisher surrendered the 3 runs, before Jeff Belge entered to get the final out via the strikeout for his 4th save.

Alex is getting more comfortable and confidant, and looking more and more like a prospect.

Offensively, 6 different RC Quakes got hits.  One of the hits was a Julio Carrion 2-run HR (9) in the 9th.  The Quakes had a pair of doubles from Austin Gauthier (15) and Griffin Lockwood-Powell (2).

MiLB Odds and Ends – Part 2
My Case For Will Smith To Make The All Star Team
wpDiscuz
0
0
Would love your thoughts, please comment.x
()
x
| Reply