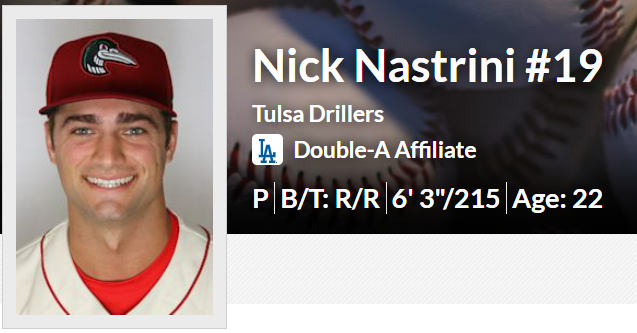 In his first AA start, Nick Nastrini flirted first with a perfecto and then with a no-no.  He issued a walk for his first baserunner after 5.2 IP.  With one out in the 7th, he gave up a HR for the first hit and loss of the shutout.  He got through 6.2 IP with 97 pitches/57 strikes.

The Wind Surge scored two runs in the bottom of the 9th.  Nick Robertson inherited 3 runners from Guillermo Zuniga, but allowed a 2-out 2-run single.

But the star on this night was Nick Nastrini.

Nick Nastrini made quite a splash in his first outing for AA Tulsa. @NastriniNick went 6.2 innings, struck out 8, walked just 2, and gave up just 1 hit and 1 run. Nastrini's ERA in his 2 outings this month is 2.25, his average against is just .146 and his WHIP is 0.83. #dodgers pic.twitter.com/sUeUyAEUuY

Cole Duensing and Aldry Acosta pitched 4.0 scoreless innings to finish off the Lugnuts.

Damon Keith was having a rough start to his Great Lakes promotion.  On this night he had 2 HRs (3).  Eddys Leonard (12) and Aldrich De Jongh (8) also hit HRs on the night.

Up 4-3, the Loons scored 4 in the 7th and the 8th.  In the 7th Austin Gauthier singled and came home on the De Jongh HR.  After a BB and single, José Ramos doubled to score two more.  In the 8th, Damon Keith tripled, and after 2 BB, Max Hewitt doubled home two.  An Eddys Leonard sac fly brought home a third run, and Jorbit Vivas singled to bring home Max Hewitt for the final run.

Damon Keith was the star on this night with 2 HRs and a triple.  Eddys Leonard, Jorbit Vivas, Austin Gauthier, and Aldrich De Jongh had 2 hits apiece.  Leonard had 3 RBIs.

Have a night, Damon Keith!

The @Dodgers prospect swats a pair of homers and adds a triple for the @greatlakesloons. pic.twitter.com/awSAmYMQ5r

Peter Heubeck started and lasted 3 innings.  He gave up 3 runs on 5 hits.  Jerming Rosario got roughed up in 4 IP.  He allowed 6 runs on 3 hits and 3 BBs, including a 2-run HR.  What Jerming did do is strike out 9 Ks.  Yamil Castillo allowed a 2-run HR in the 9th.  Carlos De Los Santos did have a good inning.  He retired all three batters he faced with 2 Ks.

Dalton Rushing SMASHES his fourth HOMER of the season❗️

It’s also his SECOND STRAIGHT GAME with a home-run❗️

Kyle Froemke had his first HR on the season.  Taylor Young had 2 hits.