Gavin Stone made his AAA debut and pitched 4 hitless/scoreless innings.  He did yield 2 walks and recorded 4 Ks.  Brusdar Graterol has now pitched in two out of 3 games.  He pitched 0.2 innings allowing a hit and recorded 1 K.  Hansel Robles finished the inning. 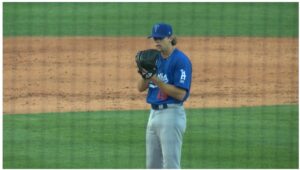 Jake Reed pitched the 6th and surrendered a run before Carson Fulmer followed with a 1 inning save in the 7th.

Andre Jackson allowed 4 runs (3 earned) on 6 hits and 4 walks in his 4.0 IP.  Mark Washington pitched a scoreless 5th.  With the score tied at 4, the roof caved in on the OKC pitchers.  First it was Pedro Báez who could not record an out and gave up 5 runs.  Daniel Zamora followed and got two outs.  But he also allowed 2 runs and left two runners on base for Yadier Álvarez.  Álvarez did one better than Baez.  He did not record an out on 8 batters vs 5 for Báez.  All 8 batter/runners scored against Álvarez.

Beau Burrows walked two and allowed a hit but finally got the K to end the inning.  When the dust settled, the Cowboys scored 17 runs on 10 hits and 9 walks in ONE INNING.

Offensively, Jacob Amaya (4) and Ryan Noda (21) each had a double.  Andy Burns had two hits.

Methinks the Pedro Báez, Daniel Zamora, and Yadier Álvarez experiment is soon coming to an end.

Nothing much to report here. Landon Knack gave up a 2-run HR and Adolfo Ramirez allowed a solo HR, and that was the scoring.  But that was not the story.  29 year old former ML pitcher Daniel Gossett threw a 120 pitch no hitter against the Drillers.

Ben Harris was the opener, and has he has so often done, pitched a perfect inning.  Kendall Williams followed but could not duplicate his last outing.  In his 4.1 IP he allowed 5 runs.  Jeff Belge followed Williams and struck out all 5 batters he faced.

Braydon Fisher and Joan Valdez each allowed a run in their two innings of work.

Great Lakes got on the board with a Damon Keith HR (4), his third in two nights.  In the third, a walk, Jorbit Vivas double (18), and an Eddys Leonard infield single to load the bases.  Imanol Vargas and José Ramos each singled to score 3.  Austin Gauthier hit a sac fly for the 4th run of the inning.

In the 7th, Vivas, Leonard, and Vargas all singled to load the bases.  Ramos reached on a fielder’s choice that scored a tie breaking run.  Keith doubled to score two.  Gauthier got his second sac fly in the game to score the 4th run.  The Loons scored a 5th run on an error.

In the 9th Luis Yanel Diaz hit his 4th HR as a Loon.

Imanol Vargas had a 4 hit night.  José Ramos went 2-5 with 4 RBIs.  Damon Keith had two more XBH and 3 RBIs.  Eddys Leonard and Jorbit Vivas also had a pair of hits.

Maddux Bruns started and pitched a lot like his scouting reports indicate…extremely wild in 2.1 IP.  It wasn’t  just the 2 hits and 2 walks; it was the 4 HBP.  He allowed 6 runs (5 earned).  The unearned run was due to his own error on a pickoff.  This game will certainly not be going on his resume.

Dominican Summer League – Dodgers Mega lead the Northwest Division by three games with three to go. Dodgers Bautista are in the same division three games back.

Rancho Cucamonga Quakes – four games back of Inland Empire with 19 games to play.