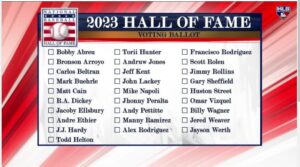 Today, we are going to learn the former MLB players on the quest to be inducted into the MLB Hall of Fame. The ballot is evenly split with 14 returning vote getters from 2022, and 14 newcomers. As a reminder, below are the rules as authorized by the Board of Directors of the National Baseball Hall of Fame and Museum, Inc.

The 14 newcomers in alphabetic order:

Who would I vote for:

While I do believe, as a baseball player, Carlos Beltran deserves to be in the HOF, I would not make him an inductee on his 1st ballot.  Per Baseball Reference’s Stathead, Beltran was pretty special.

In addition, Beltrán  was also an exceptional post season hitter.  Only two players who have played in at least 40 postseason games and hit 300/.400/.600: Carlos Beltrán and Babe Ruth!

One of the greatest switch hitters all time.  Only other switch hitters with as many hits (2,725), as many HRs (435), and as good as a career OPS+ (119) as Carlos Beltrán: Chipper Jones and Eddie Murray.

Beltrán is one of just five members of the 300-Steal/400-Homer Club, a player who made nine All-Star teams, and a player who went to the postseason with five different teams, then was historically special in October with almost all of them.

There is no question that he is deserving, but he was the ring leader of the 2017 Astros cheating scandal, so I am hoping that voters will choose to refrain from voting for him for a few years.

Jeff Kent is in his 10th and final year, and he will not get 75% of the vote from a group of voters that he had a tumultuous relationship with.  Kent is deserving to be inducted, but his surly personality with his teammates and baseball writers is considered more than his baseball exploits.  Here are some of Jeff Kent’s offensive greatness at his position:

He was not a good defensive 2B, but he could hit.  If Bill Mazeroski is a HOF 2B, then so is Jeff Kent.

Most of the newcomers on the ballot will not get 5% of the vote.  I do not believe that Francisco Rodriguez (K-Rod) will get the votes this year, but he will get enough to stay on the ballot.  K-Rod and Beltran should be the only two that will garner 5%.

I am guessing that Mark Buehrle and Torii Hunter are good candidates to not get 5% this time.

Baseball Prospectus reported on their Top 101 Just Missed candidates. They named 10, and James Outman was one of them. Here is what they said. All true by the way IMO:

“Outman does a lot of things we love: He hits the ball hard at an ideal approach angle without overswinging, he doesn’t chase that much, and he can ostensibly man center field thanks to above-average athleticism. To no one’s surprise, he is demonstrably better against righties than lefties, and it’s one of the primary reasons for his omission from the 101: that and his sub-par contact rates both within and outside the zone, primarily against pitches with bite. Outman might hit the ball hard enough where his less-than-desired contact rates don’t matter, so we could be looking up in a few months wondering why we ever doubted a guy who the Dodgers seemingly want to give a chance. After all, the Dodgers did pass on theoretical upgrades in the trade or free agent markets, so it makes you wonder just how much they like Outman.”

If he would have snuck in, that would have made 10 top 101 prospects for BP.

So if he doesn’t chase but has poor contact rates, does he just miss when he swings? Is that fixable?

He’s a plus defender who doesn’t chase. In my opinion he just needs more at bats against ML pitching. He and Thompson in center is how I would approach ‘23, which is why I believe we don’t need Reynolds.

Where is Vargas taking infield these days? If he is indeed in left, and Muncy is at third, I think we’re ready to roll.

From what I think I know, Outman’s swing and approach was totally rebuilt by the Dodgers.

Interesting stuff. I watched the MLB.TV show from Cooperstown yesterday with Brian Kenney, who I cannot stand, and a couple of other analysts, Morosi, and Feinstein. Feinstein’s take was interesting in that he votes for PED users and for those suspected of use. His take was that those who were caught we simply stupid but had the stats prior to all of the hubbub. So, he voted for both Manny and Alex, and also voted for Sheffield, who was mentioned in the PED mess, but never tested positive. Kind of like Piazza. I think Kent misses because of his tumultuous relationship with the press, and he was not exactly loved in the clubhouse either. He has the numbers though. I believe the only ones getting in are Rolen and Wagner, with an outside shot for Sheffield. Except for Beltran, I do not think any of the newcomers get the required percentage to stay on the ballot.

The odds are fairly solid that no one gets elected for the HOF today. This will be the 2nd time in 3 years. There are a couple that should, but will not. I thin Scott Rolen gets in before his 10 years are up. I hope he surpasses 70% this time. Todd Helton and Billy Wagner will get closer, and are real possibilities before the 10 year period is up. Carlos Beltrán  will eventually get in. This year? If he was not the ringleader for the cheating, he would get in first year.

Jeff Kent is going to need to wait for the Contemporary Era Committee (Veterans Committee) to get in.

There are a lot of good to very good players on the ballot. Just not HOF worthy.

I heard Helton is trending to get in this year.

I’ve always liked Beltran. Making him wait a year seems fair but for sure next year.

I’m willing to give and take points based on personality/character. It’s a team sport. I’m also giving points for 4+ WS rings.

Former Cleveland and San Diego SP, Mike Clevinger, is under investigation by MLB for Domestic Violence and Child Abuse.

Per MLBTR, “Per the report, Olivia Finestead, 24, has been in contact with MLB’s Department of Investigations since the summer. She says she has provided them with details of incidents involving physical, verbal and emotional abuse. In one such incident, she says Clevinger choked her and then, two weeks later, slapped her in a hotel room and threw used chewing tobacco on their child.”

Chicago White Sox were unaware of any investigation before signing him to a 1-year deal. Interesting since these allegations seem to stem from Clevinger’s playing time last summer in SD.

Clevinger is one of Bauer’s closest friends in the game.

Serious. They played in Cleveland together.

If I remember correctly, it was Clevinger and Tatis, Jr. that hung around with the woman that accused Bauer before he did, and it was them, that allegedy put her up to accusing Bauer. I’m sure that will come out in the ongoing litigation at some point.

Forgive me, but what is the ongoing litigation? Hasn’t everything been settled?

Scott Rolen is the lone inductee in the 2023 HOF class.

One of the best third basemen of a generation is off to Cooperstown.

Scott Rolen is a Hall of Famer! pic.twitter.com/gOb58woH48

One of the greatest 3B of all-time! 👏

Scott Rolen has been elected to the National Baseball Hall of Fame. pic.twitter.com/dWG1KddzoQ

Agreed, Rolen was a great one. Arenado should make it to the hall easily then. The only player who took forever to get in that I felt was totally jobbed by the writers was Hodges. He belonged a long time ago. Helton missed by 11 votes. 3 writers turned in ballots with no names on them making it harder to get to 75 percent.

Only Rolen made it. Helton missed by 11 votes. Wagner got closer. Kent missed in his last try with the writers.

Kent should be in. Probably in 2025 by the veterans committee.

Hope A-Fraud and Sheffield never get in.

“If Bill Mazeroski is a HOF 2B, then so is Jeff Kent.”

Could not have said it better.

Rebuilt Outman swing? Hope it works. He doesn’t chase. That’s a good thing. Next? Barrels. In my opinion nothing is more important than barrels. Especially for a guy as big as he is. Barrels for him is slugging percentage. Doesn’t chase is OBP. I see an .800 OPS in his future. .850 in his prime years.