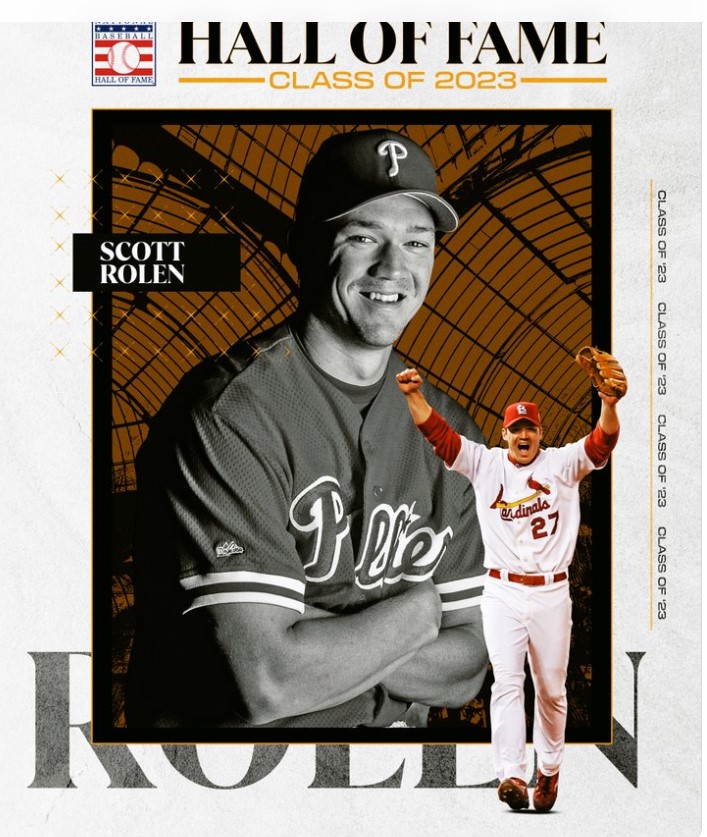 The 2023 HOF vote has concluded and one player was elected…Philadelphia and St. Louis 3B, Scott Rolen.  Rolen received 297 votes (76.3).  There were 389 HOF votes tallied, and 292 were needed for election.  Todd Helton was 11 votes short and Billy Wagner 27 votes shy.

The difference next year is that Carlos Beltrán  should get renewed interest.  Very few would deny him a plaque in The Hall, but not on the first ballot.  That can no longer happen, so voters should now be free to vote for Beltrán.

Rolen is the 18th third baseman in the Hall of Fame. Thus far, he and Chipper Jones are the only full-time third basemen to begin their careers after 1982 to be voted into Cooperstown.

Helton should get in next year, and Billy Wagner will be in his 9th year of eligibility.  What may hurt Wagner is that in addition to Beltrán, there will be 10 first timers who will for sure be on the ballot for 2024.

Adrián Beltré should become the 19th third baseman inducted into the HOF, the third full time 3B to begin his career after 1982, and to make it back to back years for a 3B to be inducted into the HOF.  He will become the second former LAD to be elected in the last 10 years that was not able to spend the majority of there years with the Dodgers because of stupidity.  Mike Piazza was inducted in 2016 as a NYM.

More than half of the above first timers should get more than 5% of the vote and will continue on their quest to be elected to the HOF.  Besides Beltré, each of Maurer, Utley, Wright, Holliday, and AGon should exceed 5%, and some should exceed 5% by a significant number of votes.  Joe Mauer and Chase Utley are in the limbo gray area.  Good enough to get voted in, and yet not good enough to get voted in.

Rolen came from a long way back from his initial vote.

In his 10th and final season on the BBWAA ballot, second baseman Jeff Kent received 181 votes (46.5%). His case will revert to the Historical Overview Committee in December 2025 for consideration on the Contemporary Baseball Era Players Committee for the Class of 2026.  I am projecting now that he will be elected at that time.

The 2023 HOF Induction Ceremony will be held on the grounds of the Clark Sports Center on July 23, and will include both Scott Rolen and Fred McGriff, who was elected by the Contemporary Baseball Era Players Committee last month in San Diego. In addition to the two players, John Lowe and Pat Hughes will be honored with the BBWAA Career Excellence Award and the Ford C. Frick Award, respectively, during Hall of Fame Weekend 2023, July 21-24. 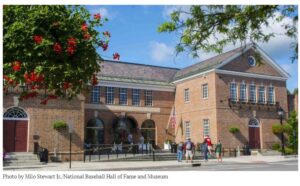 For those of you who have not visited the Museum, I heartily recommend it.  We visited there in the Summer of 1997 following Andy in upper NY in the NY-Penn League.

Also, read the book Independence Day by Richard Ford, which is partially set there.

Does Shef make it in on his last year? I think Helton and Wagner make it next year and Shef is going to have to wait for the Golden Era committee.

Shef is going to need to wait. Helton for sure makes it next year. Wagner is more of a question. I think it depends on how many of the first year players get votes. I do not think any of the ten get shut out like so many did this year.

12 of the 14 first timers received 0 or 1 vote this year. Only Beltran and K-Rod moved on.

I have a memory of the 1993 draft, and that Baseball America and other publications reported that the Dodgers were “hot” on Indiana High Schooler, Scott Rolen. That year they chose Darren Dreifort with the second pick over all(which, at the time, I had no argument with). I don’t remember why, but they lost their second round pick that year, which was the 43rd selection. Rolen was selected with the 46th pick by the Phillies. It’s nice to play “what if” and wonder what would have happened had the Mariners picked Driefort #1 overall, as had been speculated they would do, and ARod had fallen to the Dodgers at the number 2 pick and if they had not lost their second round pick, and used it to select Rolen. Ah, the what ifs of life! I can also tell you that the 1993 draft had to be one of the worst in Dodger history. It was abysmal.

Rolen is a very worthy hall of fame selection. I may also be in the minority, but I think Sheffield i worthy as well

Good point Rob. Year after year we look at draft selections and say hey, why did we pass on that guy?!

Dreifort did not turn out to be a very good MLB pitcher, but it was always Dreifort/ARod or ARod/Dreifort. Cannot blame anyone for the miss on this one.

Dreifort looked the best he ever did right when his knee finally gave out. Ironic.

I guess not believing they have enough RHP in their system, the Dodgers signed 27 year old RHP Jordan Yamamoto, and 31 year old RHP Wander Suero to MiLB contracts. There is not immediate report that either will get ST invites, but knowing how many Dodgers get invited to ST, I am guessing that they will be. Yamamoto has been primarily a SP in his professional career, while Suero has strictly been a reliever. No knowledge as to where either pitcher will be assigned or for what role.

Both have MLB experience, without good results. Depth? For sure. But who are they blocking?

Like knowing the sex of your fetus removes a lot of suspense when it is born, we just learned that Lux will be a good shortstop here:

Pretty much what I’ve been saying all winter.

I’ve been trying to get a read on where Vargas has working out and I can’t find it. He said recently the team hasn’t told him anything. That may or may not be true, but he no doubt is taking fungoes at third and in left. Maybe at second too. We may not know anything until Spring games are played.