Clayton, Mookie, and Trea Shine at All Star Game, Catman…Not So Much 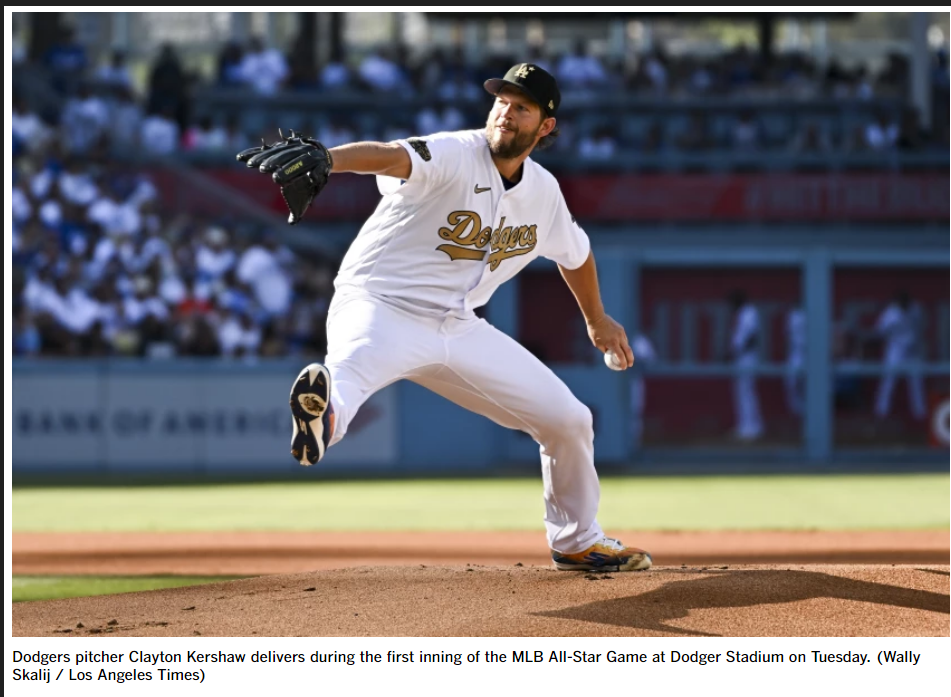 It is an exhibition game like no other.  I am sure NBA fans might disagree, but the MLB All Star game is the best in sports; at least for this fan. And the game in LA absolutely had a Hollywood flair.

The first inning belonged to the Dodgers.  Clayton Kershaw, with a big smile on his face got his first start in an All Star game, and I am sure that after the first pitch, everything was just great.  Shohei Ohtani reached out and hit a soft line drive into CF on a fast ball that was tailing away.  Kersh proceeded to pick off Ohtani for the first out.  He then struck out Aaron Judge on a nasty slider.

Kersh had Rafael Devers 1-2 put could not get him to chase, and Devers drew a walk.  Vlad Jr. grounded to Trea Turner on a 6-4 fielder’s choice.  Kershaw’s All Star night was done.

In the bottom of the 1st, after a Ronald Acuña Jr. double, LAD’s Mookie got a run scoring single up the middle.  Manny Machado hit a ball up the middle, that Andrés Giménez made a super play on that turned into a DP.  Paul Goldschmidt followed with a HR and the NL was out to a 2-0 lead after the first.  Trea Turner followed with a single, and the LAD stars were shining.

Toronto Blue Jays RHP, Alek Manoah, was mic’d up when he took the mound in the 2nd.  He was fun to listen to.  Being mic’d up did not seem to bother him as he struck out the side.  His one mistake was a Jeff McNeil HBP that he let John Smoltz talk him into throwing a back foot slider. Instead, the pitch hit McNeil in the front foot.

Four of the first five NL batters got hits, but they did not get another hit until Austin Riley singled in the 8th.  The Guardians’ Emmanuel Clase struck out the side in the 9th on 10 pitches to close out another AL win…their 9th straight.  Well the NL clubs cannot beat Tony Gonsolin, but AL All Stars sure did.  I am sorry to say, he just did not look very good out there on this night.

Well as long as a Dodger could not get All Star MVP, I am glad that a San Fernando Valley native and Notre Dame high school graduate, Giancarlo Stanton did.

All in all, it was a fairly boring game, except for the players that were mic’d up.  They were actually fun.

Watching that play by Andrés Giménez reminded me of the trade that Cleveland and NYM worked out with Cleveland sending Francisco Lindor to NYM for Andrés Giménez and Amed Rosario (and two other MiLB players).  The Mets got their franchise SS, while the Guardians got their middle infield for the next several years.

Then watching Emmanuel Clase, I was reminded that he was traded to Cleveland from Texas for Corey Kluber.  Cleveland GM Mike Chernoff has done a great job with a very limited budget acquiring players.

For those who have not seen this, here is why Clayton Kershaw is the GOAT.

That’s a wrap on the 2022 #AllStarGame! pic.twitter.com/OFj9wwPOpk

Ohtani was looking for an All Star moment in I think a fun way and tried to steal second on a Kershaw first move. A good way to start the game.

I saw a lot of it, but not every play. Quite a few zeros on the board. Even fewer hits. Saw Kershaw escape (you’re not supposed to pick anybody off in these exhibitions) Gonsolin looked like he would rather have been somewhere else. A lot of names I wasn’t familiar with in that game. Joc looked like Dodger Joc. That was cool to see, right Fred?

I read this morning Manfred made over $60 million this year. Tell me that isn’t true. He was answering questions about how little minor league players make. Because they are only paid for months they play, they easily make the poverty level. College or poverty level bus rides and cheap motels in one Bumscrew town after another?

We have a schedule that could help put some more distance from those in the West chasing. I trust we will take advantage.

I feel like our pitchers have been pretty terrible in AS games in the last while — so I did some digging to see if it is fact more than feeling. It’s fact!

Here are the bad performances since 2000 — it is a very long list:

That is pretty depressing.

Weird, huh? I don’t get it — but it’s a thing. I am very much ready for the worm to turn again and for the NL to return to a new dominant streak (like in the 70’s). I am tired of AL dominance. At least the NL has asserted itself and won 8 of the last 12 WS.

I guess, though, with the DH in both leagues, there won’t really be any reason to argue which league is better. I enjoyed taking the high ground with the belief that games with pitchers hitting require way more strategy.

I thought this was the year. That string of AL pitchers was very formidable. Manoah and Clase were very special.

True but hopefully The Catman see it.

So he sees he has good company?

Will Raley be next?

He has to get to Texas first, and then get released. He will probably get released by Tampa Bay soon/

I am not worried about Catman giving up 3 runs in a meaningless exhibition game. It is his next start that I care about. Loved the pickoff, but two favorite moments were the awesome DP made on Machados grounder to second. Couldn’t happen to a bigger a-hole. And Joe Davis comment that Ken Rosenthal was the bravest man in the Stadium interviewing Kershaw before a start, We all know how surly CK is in those moments. Dodger fans booed Pederson in the pre-game intros, but cheered when he came to bat. Seager got a nice reception too.

None of those guys listed below are named Koufax or Drysdale.

I thought it was Drysdale and Koufax.

Looks like your post got dropped in the standings Bear. What are their records in All Star games?