Dodgers Blow 5-Run Lead and Come Back for 27th Time 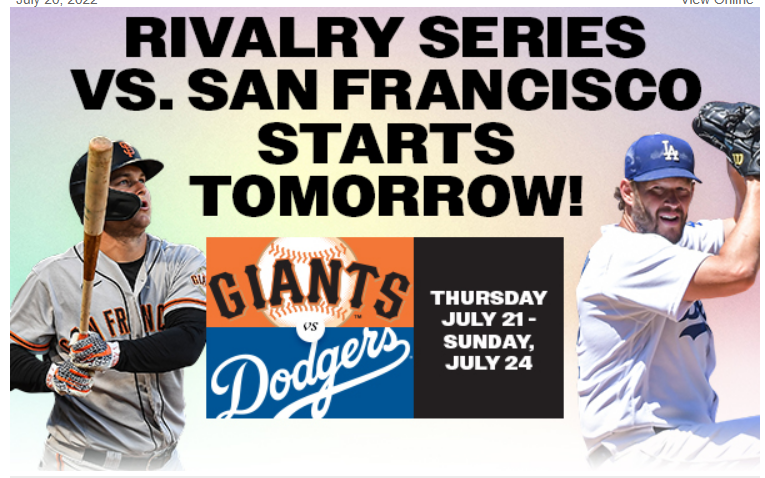 Carlos Rodón opted out of the All Star game due to a blister and split nail (cough, cough) was the starting pitcher coming out of the break against the Dodgers.  He was an All Star in 2021, so bowing out was not that big of a deal.  Methinks if the Giants did not start against the Dodgers, Carlos would have found a way to stick on the roster.

The Giants will be going with their #1 (Rodón) and #2 (RHP Logan Webb) in the first two games followed by the two Alex’s, Wood (LHP) and Cobb (RHP).

Mitch White pitched 5.0 hitless innings, but gave up a single to Austin Wynns to open the top of the 6th.  That was 82 pitches (51 strikes) for White, and the end of his outing.  Caleb Ferguson enters and strikes out Darin Ruf and Brandon Belt, and gets Wilmer Flores to routinely fly out to Mookie Betts in RF.

Fergie was allowed to stay in and pitch to Joc Pederson, but once Fergie got Joc to fly out, he was pulled for Phil Bickford.  Bickford was not the answer.  HR, BB, hard single, and Bickford gets lifted for Alex Vesia.  Vesia hits the first batter he faces on the first pitch and gets Yermin Mercedes to chase on a very high fastball.  Vesia puts a 94 MPH fastball right down the chute, and Ruf did not miss it.

John Brebbia did not fool anyone, but the Dodgers could not get the big hit from Will Smith, and the game is turned over to the bullpen in a tie game.

The usually reliable Evan Phillips gave up 3 walks and a Joc Pederson double for a run to put the Giants up.  A crazy stat I heard from an unreliable ESPN crew said for the last five years, the Dodgers were 195-1 when leading by 5 or more.  Thanks to a Gavin Lux one out double, a Trayce Thompson a two out triple to tie the score, a Cody Bellinger walks on 4 pitches, and a Mookie 3-run blast (21), the Dodgers are now 196-1 when leading by 5 or more.

Overall the Dodgers had 4 doubles, 1 triple, and 2 HRs in their 10 hits.  All 9 runs were scored with 2 outs.  The Dodgers were 4-10 WRISP. This one took a little more work, but it turned out just fine.

With a RH Dominic Leone on the hill for SFG, Doc could have PH Zach McKinstry for Trayce Thompson, but the books show that Thompson is good at hitting RHP, and Doc left him in.  Trayce rewarded the confidence with a booming triple of the CF wall to tie the game.  Since becoming a Dodger, Trayce is batting .276/.333/.500/.833 in 58 AB.

I know there are those who believe that Max Muncy is just about ready to break out, while others think he is still hurt.  Regardless, while Trayce is hitting clutch, he should be the LF with Lux at 2B for most of the rest of the season.  If Trayce slumps, hopefully Max will be able to step in and carry it forward into the playoffs.  Belli is not hitting, but his defense and speed make him more playable.  The team can work with one poor offensive player in the lineup, but two makes it more difficult.  Although the team continues to win with both Muncy and Belli in the lineup, so why should we complain.

Joc and Gavin hit doubles down the left field line with the shift on and 2 strikes.  Brandon Belt bunts a single against the shift to get on base in the 9th.  It sure would be great to see Belli and Muncy stay back and put the ball in play on the left side.  Although Belli did scald a fly ball to left but it hung up for the out.

Not only was Mookie the offensive star, but he made a diving catch off of a Joc Pederson drive to end the game.  All in all it was a great start to the second half of the season.

Phil Bickford and Alex Vesia are having problems staying effective.  The Dodgers could use a couple of lock down relievers rather than experiments at the trade deadline.  They could also look for a starter, and move White to the pen.

I am not concerned with the game pitched by Phillips.  He has been locked down for quite some time.   This was the first run he has allowed since June 17 (11 games) and first earned run since May 26 (19 games).  Caleb Ferguson and Yency Almonte are also good holdovers.  Reyes Moronta and David Price??? four questionable relievers. That is I think there are other relievers that could be more consistently effective.

Mitch White deserved the win, but the team got the win, and Mitch will take that every time.

It would be a shame if this team gets hijacked because of a poor bullpen.  The team is on another long consecutive game run.  They play 18 consecutive games.  They have 12 games before the trade deadline.  What are they going to do?

Another nice defensive play.  This one from Trea Turner.

Pitching. Yoiks. It would appear a few of the broken parts of this staff are about set to return. This of course is a good thing. How good? We’ll see. But will we KNOW before the deadline? I don’t see it. But again, my vision ain’t what it usta was.

I am one who still believes in Muncy. I hoped several days off would help him. Didn’t look like it last night. And I can’t believe in Bellinger while he remains in that upright stance. Nothing will change until he changes that.

This game was closer than 9-6. Turner’s lost fly ball gifted the team 2.

An ugly win is still a win.

I give the staff a little leeway on this one. Nobody had pitched in four days at least. Bickford did probably punch his ticket to OKC. But Vesia and Phillips both have been pretty effective this year. The offense bailed Phillips out and he got the win.

Bickford had no movement on his pitches. Time to replace him.
Any word on J.Turner’s injury? Might open up a spot for Vargas.

Kinda makes it easy to be a fan.

Still have hopes that if the team can put enough room between them and the competition, then Muncy can take time to get his shit together.

In the meantime, we can hope.

I guess they figure time off is not what he needs. The team continues to win with both he and Bellinger hitting like they belong in the minors. Says a lot about how good the Dodgers are.

Joc was on the wrong end of two great defensive plays. His first at bat had a 115 mph line drive that missed the chalk line by a few inches. He would be a much better lefty bat than Muncy’s.

Muncy and Bellinger are not producing offensively and both can be replaced defensively.

Patrick Corbin will earn about $23.4M annually through 2024. I would take that on if the Nationals would take Bellinger and Muncy in a deal for Soto.

Corbin and Soto to Dodgers
Bellinger, Muncy, Busch, Pepiot, and another prospect not named Miller.

Bums, there’s zero chance that deal would appeal to Washington.

That deal is just what I would like to see and not what I think might happen. Although I would pull back Max and still take on Corbin if it meant fewer prospects going to WA.

I like to toss in Muncy in trades to make the Muncy supporters respond back that nobody wants him. You are not one of those people Bluto so that does not refer to you. More to those who usually wear rose colored glasses.

I wonder who the Dodgers might get in a trade for the same package they might offer to WA. Soto is a DH and while a better hitter than Betts, is not as entertaining and does not add to wins defensively.

I want to dump a lefty bat if we get Soto’s lefty bat.

I believe you may be speaking to me, Mr. Bum, so I shall respond.

Yes, I am a Muncy supporter and, no, I don’t think anyone wants him in a trade. The two are not mutually exclusive.

In your lineup above, Doc might prefer to use Vargas as the DH and Soto in left. I would guess Soto would be considered the better outfielder at this point.

As opposed to a bum wrap.

You went from won’t happen to pure ridiculousness. You kind of pissed me off STB. Every once in a while “and the horse you road in on” seems like what I want to say to you.

My apologies. Did not mean to offend.
By the way, I came by camel.

Well I don’t screw camels so I guess I am now unoffended.

My target was Mark if there has to be an individual. I didn’t remember you being such a Max fan. BTW, you basically compared Max’s value to Jeren Kendall’s.

Yes, I did, and as you so aptly pointed out, that would be pure ridiculousness.

Nats likely don’t want our struggling players, though they may be remotely interested in Bellinger. He is young enough to salvage and even in his current funk is worth 2-3 WAR.

I read this morning we are the best fit for Soto. It will take Vargas and Pepiot/Miller and a van full of wannabes. If we take Corbin maybe only Vargas and a few others. I say do it. I’m willing to give them all 20 of our recent draft picks PLUS The Duke of Dingers.

Now you’ve crossed the line, Badger.
The Duke of Dingers will be a future Dodger Hall of Famer.
He’ll be so good that Edwin Snider will send word from the beyond that he no longer feels worthy of the name Duke and is relinquishing same to Mr. Dinger.

While all that may be true, if it seals the deal, he’s outta here.

Just compare his numbers at Tennessee Wesleyan this year with Soto’s on the Nats and you’ll see that The Reinoso is definitely the better player.

Tennessee baseball? I don’t think so.

I don’t see many other offers here. And not a critique of what I think it will take.

Pepiot, Pages and Busch. And we take on half of Corbin. It’s only for 2 1/2 years. 3 post seasons. How badly does this team need him? How badly do they want to make sure SF and SD don’t get him?

History of AF Drafts With LAD
An Avalanche Or A Trickle of Trades
wpDiscuz
20
0
Would love your thoughts, please comment.x
()
x
| Reply