Something Special About the LAD Uniform 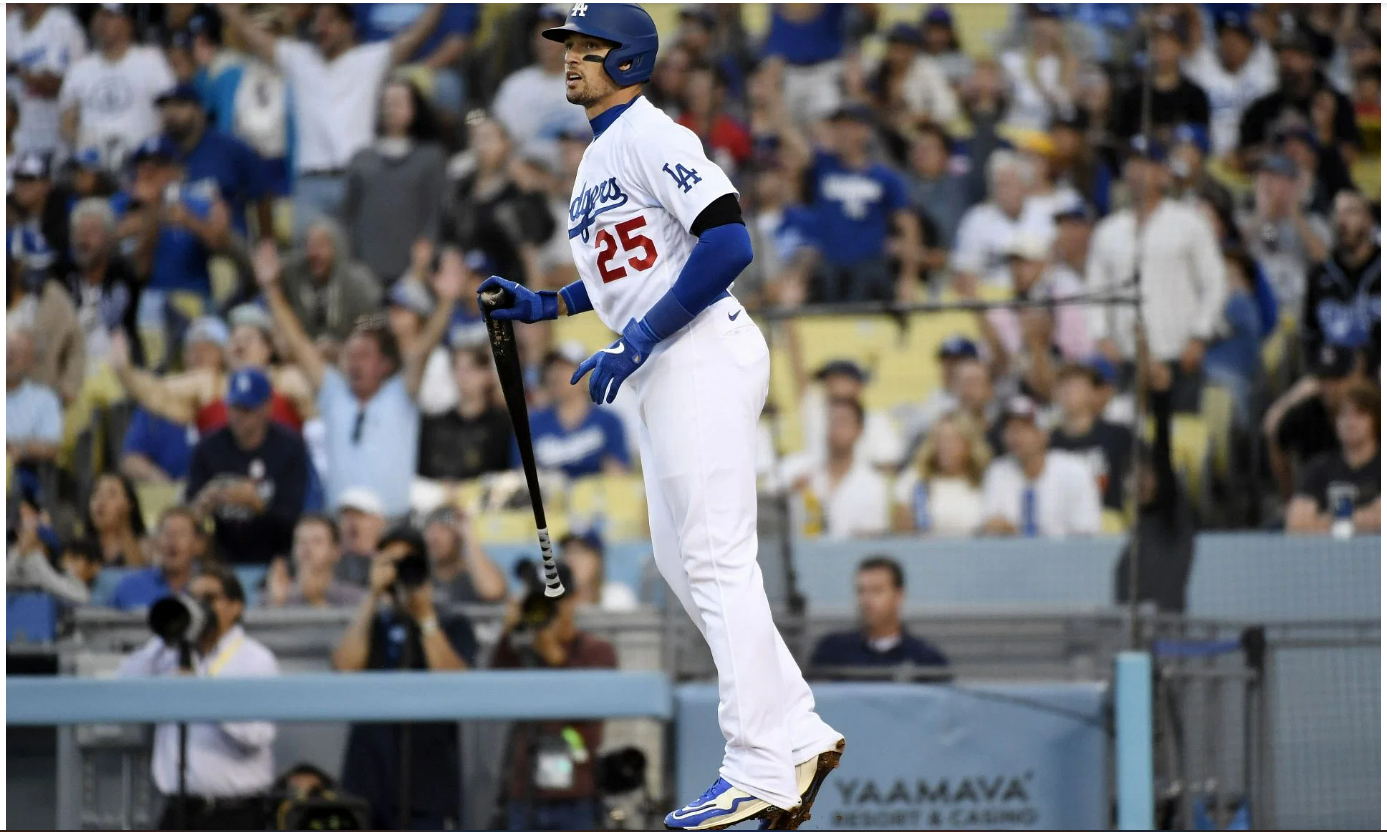 Is there something special about the LA Dodger uniform?  Throwaways like Trayce Thompson, Joey Gallo, Andrew Heaney, Tyler Anderson, Evan Phillips, Yency Almonte, even Brusdar Graterol have some how put on a Dodger uni and become a fixture with the Dodgers.  Look at every one of them and ask, where would the Dodgers be without them.   That is probably less true with Gallo as he has been with the team less than a month. While not a throw away, Chris Martin is certainly showing a vast improvement from the first half of the year in a Cubs uni.

Trayce Thompson was released by San Diego, and Detroit really had no use for him.  AF called Detroit needing a RH bat with some pop, and they knew Trayce.  All it cost was cash considerations.  If it weren’t for multiple broken bones in his back, he just maybe could have stuck with LAD his first time.  But he did not.

This is Trayce’s 13th year in professional baseball.  Before joining LAD for the second time, Trayce had accumulated all of 577 MLB ABs.  Trayce was a 2nd round pick in the 2009 draft by CWS.  He was traded to LAD in December 2015.  Since his stint with the Dodgers the first time, Trayce has played with NYY, Oakland, CWS (2nd time), Cleveland, Arizona, Cubs, Padres, Detroit, LAD (2nd time).

Joey Gallo was a 2012 compensation pick after the first round (#39 overall) by the Texas Rangers.  Gallo was selected by Texas in June 2015.  He was on the Rangers MLB team fulltime in 2017.  Gallo was traded to NYY for 4 Top 30 prospects.

Chris Martin has been an absolute pleasant surprise.  I know the Dodgers have been high on him for at least since he was with Texas in 2019.  At the deadline, he ended up in Atlanta.  Martin signed with Chicago Cubs as a FA this past March.  For the Cubs, Martin had 31.1 IP, with an ERA of 4.31, a WHIP of 1.34, 5 HRs allowed, and a 40/4 K/BB ratio.  It was that last metric that excited the Dodgers.  The Dodgers acquired him for fan favorite utility man, Zach McKinstry.

This is not to discount those that came before…Justin Turner, Chris Taylor, Max Muncy.

Ryan Pepiot had a rough outing.  He went 5.0 IP and after 4.0 scoreless innings he allowed 4 runs in the 5th on 2 singles, a walk, and a grand slam HR.  He allowed an unearned run in the 5th.  Blake Treinen did inherit a runner on 3rd in the 6th from Pepiot.  He gave up a sac fly, and got the final two outs  without allowing a baserunner.

Tommy Kahnle and Carson Fulmer pitched scoreless innings.  In the 9th, Daniel Zamora and Heath Hembree made it interesting.  Zamora allowed a single and issued 2 walks to load the bases.  Heath Hembree inherited 3 runners and gave up a single to score one.  A fielders choice and error scored the final two of the inherited runners.  Hembree got the final two outs to preserve the win.

In the 3rd, James Outman doubled (7) and scored on a 2-out Ryan Noda single.

Landon Knack had his best outing since May 20.  He threw 4.0 shutout innings with 1 hit and 1 BB.  He recorded 3 Ks.  Alec Gamboa entered in the 5th.  He gave up a single and BB to the first two batters.  A ground out moved the runners to 2nd and 3rd.  A sac fly and single plated the only two runs of the game.  Gamboa followed with three scoreless innings.

The Drillers had five singles..  Kody Hoese had 2 of them.

River Ryan started.  He walked the first two batters, got two outs, and then the defense let him down.  Imanol Vargas dropped a throw to first that should have been the last out.  However, a run scored, and two runners were left on base.  Ryan gave up the 3-run HR and was removed from the game.  All 4 runs were unearned.  Ryan had 30 pitches in 0.2 IP and the Dodgers do not like for their pitchers to throw more than 30 pitches in an inning.

Four Loons pitchers followed to pitch the final 8.1 innings.  They allowed 4 runs on 7 hits and 9 walks.  They did register 10 Ks combined.

The Loons had 1 hit in the game.  A single by Luis Yanel Diaz with 2 outs in the 5th.

Yes. There definitely is something about putting on an LA Dodgers uniform. It’s also about the coaching staff. Try it our way and see what happens.

And speaking about that; checking the box scores I couldn’t help but notice OKC struck out 17 times. In 8 innings. Tulsa had 13 Ks. That’s not ok. Is it?

And, speaking of box scores; those 2 runs given up by May are shown as earned. They were not. We made 3 errors last night, not just the one by Gallo.

Looks like we can be stopped by excellent pitching. Hopefully we won’t see any the rest of the way.

I got the Tim Neverett and Rick Monday broadcast, and Monday would not drop the two errors that were ruled hits. He was right of course. It was a shame for Dustin to get the two earned runs, but they were runs nonetheless that beat him.

There is good pitching, and then there is Sandy Alcantara. Alcantara is special. He was throwing 100+ in the 8th. We are going to see good pitching in the playoffs, as well as the next several days (Marlins, Mets, Padres).

Playoffs – Jacob deGrom and Max Scherzer are the two best. Atlanta’s Max Fried, Kyle Wright, and Spencer Strider will be very formidable. The same with San Diego’s Yu Darvish and Joe Musgrove (and Blake Snell generally gives LAD a bad time). Phillies have Aaron Nola and Zach Wheeler, both very good, but not elite. The same with Cardinals Adam Wainwright and Miles Mikolas. But yes, playoff pitching will be better.

DeGrom and Scherzer is downright terrifying to me.

but you can only control what you can

Amen to that. And Urias with over 100 pitches? No need for that. Even with a 6 man rotation, at this point I keep everyone on a pitch count. 6 innings or 90 pitches, whichever comes first. But that’s me, and you know how cautious I am with our starters.

Test
Recording some tunes for the Grandkids.

Sorry for the indulgence.
Thanks Badger, Bear, and Jeff.

I can’t hear a thing Fred. I assume you’re singing the D-O-D-G-E-R-S Song (Oh really? No O’Malley). My favorite song when I was a kid.

From second to third, its almost absurd, amazement on everyone’s faces.

Dating ourselves Fred. “I’m just a lonely boy… lonely and blue…”. Did it again.

If you read it today, it could have been today’s news.

He had a bad outing a couple/three days ago where he was really knocked around and only lasted 1/3 inning. In that appearance his velo was not very good.

Yesterday, however, he pitched a perfect inning and his velo was up to just a tick under his norm. So things are looking up.

It was yesterday and it was you that said it Jefe.

Don’t believe everything you read.

Unless they are DFA’d with the upcoming 40 man crunch, I expect to see Jackson, Grove and Pepiot take starts once the playoffs are secured.

You are going to need to wait until next Spring. He had a good game last Friday. I watched part of it.

Who would they option or cut loose to get them (particularly Jackson and Grove) back on the 26-man roster?

As it is, AF is going to have his hands full trying to make a place for Treinen, VGon, etc.

The Dodgers are hurt more than any other team with the September callup limited to 2. All of those pitchers would have been called up when anyone on the 40 man was available to be recalled in September.

You are correct, the 40 man crunch is going to be felt, but the 26 man is going to be very tough. Bickford is probably on his way back to OKC when Kersh and Treinen and VGon are recalled. Apparently the organization is very pleased with how Victor’s rehab is going. Which pitcher goes when the the third is added? Then there is Kahnle. Duffy is scheduled to be available even before Kahnle.

It is possible (probable?) that both Kahnle and Duffy will not get called. With that, I agree with your assessment that there is no way, Jackson, Grove, or Pepiot are recalled, unless there is an injury. When Kershaw returns, the team does have enough for a six man rotation.

Can those called up be sent back down and new meat brought up? Two this week, two next week, then the first week two again, then one from week one and one from week two, then … The End.

Yes. As long as they have options. There is an option wait period (I think 10 days), before they can be recalled (except for injury). Pepiot can be optioned one more time before he has to stay. That should not be hard to navigate.