Well the 2022 regular season has come to an end.  On April 8, the Dodgers opened the season with a 5-3 win against the Rockies in Colorado.  180 days later, they wrap up the season with a win against the same Rockies, but this time in LA. The Dodgers finished their historic run with 111 wins, the most in Franchise history.  No NL team since the 1906 Chicago Cubs (116) have recorded more wins.  The 2001 Seattle Mariners team also won 116.

Looking to buck the trend of those high win teams, the Dodgers are hoping to put a bow on this season with a WS Championship.  The 1906 Cubs lost to the crosstown Chicago White Sox 4 games to 2 in the WS.  95 years later, the 2001 Mariners beat the Cleveland Indians in the ALDS 3 games to 2, but lost to NYY 4 games to 1 in the ALCS.  The 1954 Cleveland Indians team were swept by NYY in the WS.  Of the four other winningest teams, only the 1998 NYY team won the WS when they swept the Padres.

The Dodgers will face either NYM or San Diego who start their wild card series on Friday.  All three games will be played in New York.  As I previously stated, I have no preference as to which team the Dodgers play, but I am hoping for a 3 game series.

How deserving was it for Clayton Kershaw to get the win in the final game of the regular season.  Clayton Kershaw has started 7 games since he was reinstated from the IL, he is 5-0 with a 1.54 ERA and a 0.85 WHIP.  He has 41 IP, recorded 49 Ks against 8 walks.  He has dominated since his return.  He and Julio Urías will be as formidable as any other duo they might face, and that includes Jacob deGrom and Max Scherzer.

Tony Gonsolin said he came out of Monday’s game just fine.  He threw an additional 14 bullpen pitches after being pulled.  He has a sim game on Saturday and it is expected to go 4 innings.  Right now he is slated to start one of the NLDS games.  He believes if he has his command, he can go 5.0 innings.  We will see.  It is the playoffs, but might he be a little too optimistic?  I do like the idea of having Gonsolin for 3 or 4 or 5 innings.

Dustin May and Blake Treinen are still expected to be a part of the roster discussion.  Both just threw bullpens and came out fine.  They are both expected to throw sim games this weekend, and if they come out healthy, the discussions are going to get real.

CT3 is still hurt, and his availability for the NLDS is questionable.  He got a cortisone shot in the neck, but still cannot swing.  He will undoubtedly try to swing this weekend in the sim games.

Freddie Freeman fell a hit short from a 200 hit season, and was just beat out for the batting average title by Jeff McNeil, .326 to .325.  However, both Trea Turner and Freddie both reached 100 RBIs for the season.

Where has that Craig Kimbrel been all season?

Leave it to Orel to put a positive spin on the lethargic play of late.  He points out the mental grind and strain it takes to always trying to play at an elite level every game.  Players need a mental break just as they need a physical break.  Okay I am going with that.  I do remember how the Dodgers broke out from a lethargic September in a 104 win season in the 2017 NLDS against Arizona scoring 20 runs on 31 hits.  That continued on to the NLCS against the Cubs when they scored 28 runs on 42 hits.  In 8 playoff games, the Dodgers scored 48 runs on 73 hits.

On to the Playoffs.

Finally, for 64 years, the great HOF Jaime Jarrín has announced LA Dodger games on Spanish speaking radio stations.  He is retiring at the end of the Dodgers season, and is positioned right along side Vin Scully on the Dodger Ring of Honor.  He is not only important to the Hispanic community, but also to Dodger fans everywhere.  LA has been extremely fortunate to have the best of the best as professional and college sports announcers, but Jaime Jarrín does not have to take a back seat to anyone.  Congratulations to Jaime for an extraordinary career. 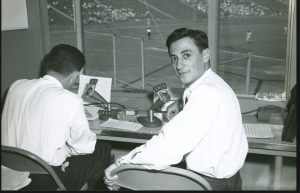 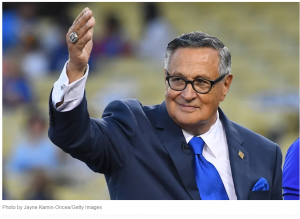 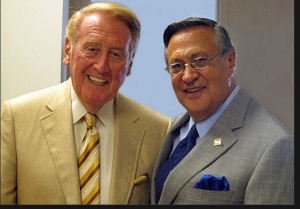 The team won 111 games without Bauer, really without Buehler. With Muncy underperforming, with Kimbrel barely performing. With a former MVP basically playing at replacement level!

There was vast discussion across the various boards and Reddits that team wouldn’t even eclipse 100 wins before Buehler went down.

And don’t forget we basically didn’t have Treinen for most of the year or Hudson for even half of the year either.

Well the bats have been resting the last 4 games. Before yesterday they were 23 for their last 126. 8 for 30 yesterday still leaves them a few hits short of the Mendoza line to finish the season.

Gonsolin. Gulpsolin as far as I’m concerned. No matter who is up next the lineup will be stronger than anything he’s faced over the last several weeks. He said he hopes to go 5. We all hope he goes 5. I have my doubts. Same with May. Piggyback those two for 8 would be cool.

MVP and Cy Young? I’ve got Goldschmidt and Alcántara. AL? Who cares. Craig Kimbrel is on The Athletic’s list of Cy Yuk winners. I wouldn’t go that far, but on the list is valid.

IF (Big IF) Gonsolin gets his command, it will not matter how good the hitters are. He proved during the year that when he was healthy and had command, he was basically unhittable. Gonsolin appears to be healthy AND rusty. Will a 4.0 inning sim game get him ready for NLDS? I guess we are going to find out. But I will take 3 or 4 or 5 innings of Gonsolin and take my chances. And, the Rockies are better offensively than the Padres.

MVP and CY Winners? I concur with you…Goldschmidt and Alcántara. LAD will get a pair of runners up…Freddie and Julio.

I think it’s much more rare for premium, uninjured pitchers to go five innings in the playoffs than you or i would expect.

Gonsolin went 2 innings against Colorado, 40 pitches, only 24 for strikes. I think they were looking for 3 innings and 45 pitches. Is he ready to go against the winner out of NY? I don’t think so, but obviously it isn’t up to me.

I know there were a lot of people who did not think that Gonsolin would make it back at all. His first inning back he threw 13 pitches; 4 balls and 9 strikes, and he got the side out in order. It was his 2nd inning where he had some command problems. In his 2 IP, he had more whiffs (8) than any other pitcher in the game, including José Ureña who threw 6.0 innings and 91 pitches.

His spin rate was above season average for every pitch.

It sure appears that he is healthy, and now he needs to work on command. He undoubtedly will not be built up enough to go long for the NLDS.  It would be a longshot if he went 5.0 innings, but 4.0 is possible. I will take 3.0 with a piggyback of Andrew Heaney. He will be throwing a sim game against LAD hitters this weekend. I have zero doubt that Mark Prior and Connor McGuinness will work on his command this weekend. He did pitch fine during the season, so I see no reason why he cannot get back to that level of pitching, even if not for the length. He will make a mistake over the plate, just like Kershaw did with Tovar yesterday. It happens even when they are going good.

I am more skeptical on Dustin May and Blake Treinen.

I figure ne could be ready to start, and throw 75-90 effective pitches, by the World Series.

I would be happy with that.

He wasn’t ready last week but we can still hope he will be when the time comes.

It’s being reported that the Mets may not use deGrom in the wild card series. Scherzer would start game 1. If they win, then Bassitt would start game 2. Only if the Mets lose one of those games would they use deGrom. The rationale is that by holding back deGrom they can then use him twice against the Dodgers.

Blake Snell is scheduled to go Game 2, and NYM is not as good of an offensive team against LHP than against RHP. While Snell did not dominate the Mets, he was far superior against the Mets than was Chris Bassitt was against San Diego.

When I first heard the report I thought it was a show of total disrespect to the Padres. But then I heard (I think Orel or maybe the postgame guys) that we have no idea why deGrom is not slated to pitch Game 1 or 2. Then I looked at deGrom’s stats for September. In 5 starts, deGrom threw 28 innings, allowed 14 runs on 23 hits and 5 walks, and 6 HRs. He did have his K pitch working with 47 Ks. Yes the last game was against the Braves, but the three previous games were against Cubs, Pirates, and A’s. Certainly not monster offensive teams. Is deGrom tiring from being out most of the year and fighting to hold off the Braves? Could that be the reason why Showalter wants to hold him out?

Knowing who they are facing, I am more inclined to believe that NYM is not saving deGrom for LAD, but more that he needs the rest. If NYM loses either Game 1 or 2, deGrom will go Game 3 no matter what.

I think the strategy of holding deGrom back if they win game 1 is a very valid one. I also think deGrom is not completely healthy. Should be a fascinating series.

3 games in NY would favor the Mets. I hope it goes 3, all extra inning games. I don’t believe it matters who wins, but we’ve dominated SD and the travel time would sure be easier.

Bellinger might not be all the way back, but the last 14 days he has looked more like the old Cody than the post injury one. I care less who they play in the playoffs. This team is on a mission.