Rest In Peace Harold, You Will Be Missed 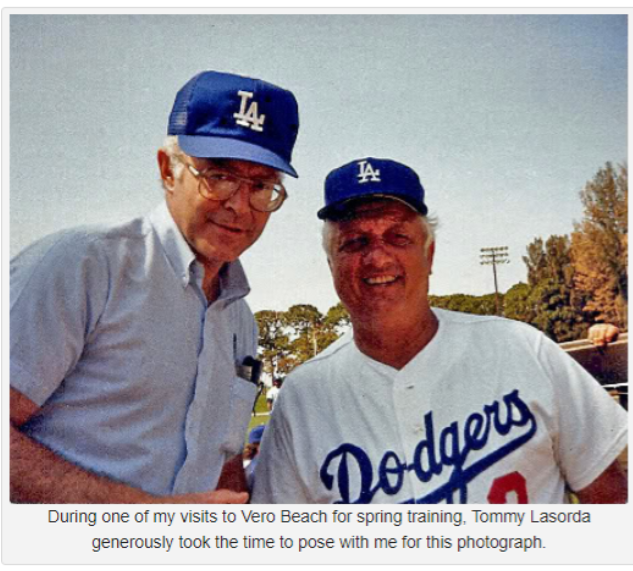 With great sadness in my heart, this post is dedicated to someone who has become a dear friend through baseball discussions since 2016, and the Great Lakes Championship run.  Tuesday I received the following email from the daughter of Harold Uhlman.

This is Harold’s daughter. I am writing with not good news. Harold passed away suddenly yesterday afternoon. Just thought you should know. He so loved writing the blog and watching the games.

I am heartbroken from this news.  Harold is the kindest person I have ever communicated with on any blog.  I will forever remember our discussions on Caleb Ferguson.

I last communicated with Harold on September 25.  He had been under the weather, but felt he was getting better.  He wanted to write the final Sunday MiLB Summary for me.  He loved to help me when I needed it most.  While on vacation, he went out of his way to send me posts he had written in the past so I could publish them on LA Dodger Chronicles.

Harold was a huge family man, and commented to me about them many times.  Harold was a Jr. High School teacher and coach, and loved every bit of it.  He was very involved in his Church.  He was still volunteering in the last couple of weeks.  I will miss Harold for being a friend and helping me to launch LA Dodger Chronicles. I will miss his keen insight into the MiLB players and their personal profile.  He had a way to tell a story about the player more than his numbers.  He was a prolific writer who wrote for at least three blogs that I know of.

Here is what Harold wrote about his short bio on this site:

Harold Uhlman was born and raised in a small Canadian town in Nova Scotia. He was captured by the voice of Vin Scully and the bat of Duke Snider in 1952 and with a broken heart followed them when they moved from Brooklyn to Los Angeles for the 1958 season. His all-time favorite player on the field is still Duke Snider and the player he respects the most is Jackie Robinson. Along with his 70 years as a loyal Dodger fan he has had an unwavering passion for minor league baseball.

Harold you will be missed.  RIP my friend.  We will meet again.

My condolences are with the Uhlman family. I know that all us Dodger fans and readers of both LADT and LADC will miss his postings and comments, especially his MiLB reviews. We’ve lost more than our share of great Dodger legends this year. Now we’ve lost one of their biggest fans. The Boys in Blue need to win one for Maury, Vin, Mike Brito and Harold.
Go Dodgers and RIP Harold.

Such sad news.
Condolences to Harold’s family.
Can’t add much to what you, Jeff, and stevied317 have already said so well.
Harold had a way of looking at the positive side of things, something sadly lacking in today’s world.
As they say, Harold, you’re in a better place now.

Harold was a kind hearted gentleman who loved his family, his church and the Dodgers. Probably in that order. I met him in 2008 or 2009 when the Thinkbluela.com message board participants met up at Camelback Ranch for a week of Spring Training, it was a long haul for him to come all that way, but he did and the stories he told of he Dodger memories were impressive. We’d meet up early every morning and head t the back fields to watch the minor leaguers. That was his passion. He followed them all.

When I heard the news I looked up his email address to send condolences to his family and found a very thoughtful email he sent me back in March of this year that I had missed.

My condolences to Harold’s family. He was a good honest man and he will be missed.

Very sad news. Always came across as a real Gentleman, which is a great way to be remembered. Rest in Peace.

Very sad news. I really liked H, I know we all did. He will be missed.

My condolences to his family.

Thoughts and prayers to the Uhlman family. Rest in peace Harold. I will miss reading your Minor League posts.

Harold was the epitome of a kind man! I always enjoyed reading his articles that would introduce us to one prospect or another. Not only would he provide a detailed background for that player, like the junior high teacher he was, his articles also would always be laced with hope and encouragement for their future success. His positive non confrontational attitude was a breath of fresh air in Dodger blogdom. I will miss him. It is very sad to see the AC DC team come to an end.

Terribly sad news. Condolences to Harold’s family and to all of those who knew him. RIP.

Below is Harold’s obituary I received from the family.

When I heard about Harold’s passing, I contacted Mark to advise him. Mark also has a nice tribute to Harold at LADT. If you go there, you will also see a very moving tribute from Evan.

Evan also reached out to Ron Cervenka (ThinkBlueLA) who was going to reach out to some of Harold’s friends that used to frequent an old message board.

I have been on the road and just heard the sad news. Harold, you will be missed, in fact you already are missed. A note to Harold’s family–thanks for sharing him with us.