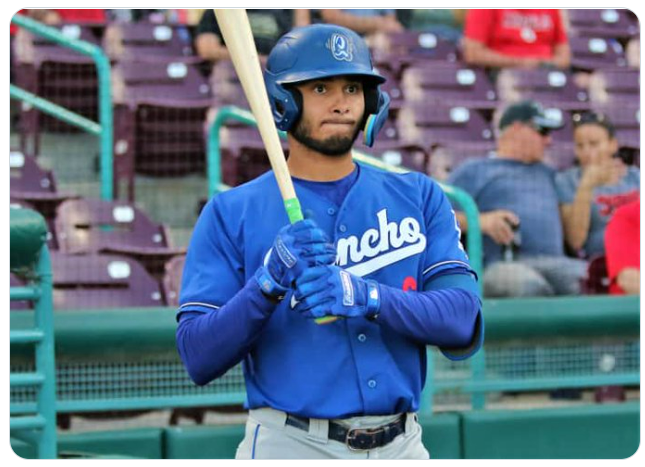 Garrett Cleavinger and Justin Bruihl each pitched an inning.  They both pitched in heavy traffic, but got out of their innings without giving up a run.

Jacob Amaya got his first AAA hit, and it was a blast.  A Grand Slam Blast.  Amaya also singled and got HBP with the bases loaded.  The GS put OKC in the lead for good on the night.  Amaya ended up with 5 RBIs.  Welcome to AAA, Jacob.

Jacob Amaya's first hit at the Triple A level was a grand slam! pic.twitter.com/3R1jrRjbjO

Jason Martin also homered (9) for OKC in the 2nd inning. Jason had added a single to his night.

Michael Busch had two hits including his 7th double.

Fighting for 1st place in the Texas League North Division, Bobby Miller took the bump and pitched one of his deepest games yet; 5.2 IP and 94 pitches (58 strikes).  Miller has reached 6.0 IP, but not 94 pitches.  He pitched through a lot of traffic, but was still able to navigate through most it.  In the 4th, Miller allowed a solo HR (13) to 24 year old RF Matt Wallner.  In the 6th, with one out, CF DaShawn Kiersey Jr. singled.  He stole 2nd (17) and 3rd (18), and scored on a ground out, 4-3.  With the score now 5-2, Miller was relieved by Jose Hernandez, who promptly yielded a HR (5) to LF Leobaldo Cabrera.

Hernandez and Jose Martinez kept the game 5-3 through 8.  Nick Robertson entered the 9th, and made things very interesting.  He opened the 9th with B2B walks.  He induced a F-8 and kept the runners anchored.  But a WP moved the tying runner into scoring position.  Nick struck out the next batter, but unleashed a second WP for one run.  The tying run was now on 3rd with two outs.  Robertson struck out the batter to end the game and earn his 3rd save.

In the second with one out, 3B Abiatal Avelino singled.  Justin Yurchak followed with a BB.  With two outs, Chris Betts singled to score Avelino and a 1-0 for the Drillers.  Devin Mann then stepped to the plate and hit a 3-run HR (8), and a 4-0 lead.

Devin Mann just hit his 8th home run of the year and it was a 3-run shot that gave the Drillers a 4-0 lead against 1st place Wichita. Mann is having a great year hitting. 263 with an OPS of .260. #dodgers #dodgersprospects #devinmann pic.twitter.com/yxi5WhqjoF

The 5th run for the Drillers was yet another HR (11) from Andy Pages.  Pages has homered in consecutive games and 6 times for the month.  For the month of June, Pages is now hitting .319/.418/.766/1.184 (47 ABs).  Pages is really started to get comfortable in Tulsa.  Since arriving in the US, Pages has always spent his season in one venue.  Will this year be different?

Another day, another long ball.

Bobby Miller is done for the evening and threw a season-high 94 pitches in 5.2 innings. He gave up 6 hits, 2 earned, and struck out 7. #dodgers #dodgersprospects #bobbymiller pic.twitter.com/WdZW5rBE9A

Alex De Jesús the #20 (MLB Pipeline) for the Dodgers hit for the cycle on June 16, 2022.  He narrowly missed the cycle in 2021.  He missed out on a triple last year.  I like to consider myself somewhat of a writer, but why attempt to cover something that was done so expertly by one of the MiLB writers, Stephanie Sheehan.

I know that it is fashionable to be a follower of Diego Cartaya.  But for me, the other two prospects signed on that day, Alex De Jesús and Jerming Rosario caught my eye, and I have been following both since their DSL days (as well as Cartaya).

It was a historical night for the Loons.  Not only did De Jesús hit for the cycle, but there were other highlights to commemorate.  Per Noah Wolf, Great Lakes Loons journalist:

The last Loon to hit for the cycle, the only one before De Jesus, was Jaime Pedroza on June 5, 2009, in a game at the West Michigan Whitecaps. The cycle for De Jesus is the first in Dow Diamond history.

From a historical perspective, it was an eventful game for the Loons offense. Nine doubles in one game snaps a franchise record that had stood for over a decade – the Loons had eight doubles in a game only once, way back on August 31, 2010 at West Michigan. 12 extra-base hits is a feat Great Lakes has only accomplished once before, on August 3, 2017 at Dayton. The Loons also bested a season-high for hits with 19, way past their previous best of 14 this year.

There was individual greatness apart from the De Jesús cycle. Vargas smacked three doubles, becoming the 12th Loon with a trio of doubles in a game in franchise history. De Jesús matched a season-high for a Loon with four hits, and set a new season-best with three extra-base hits.

Nick Nastrini started for the Loons and pitched exceptionally well.  He pitched 4.2 scoreless IP allowing 3 hits and 3 walks.  He also registered 9 Ks. He threw 87 pitches, 54 for strikes. Ryan Sublette followed Nastrini and after getting out of the 5th, had a rough 6th inning.  After a lead off HR, a single, walk, and 2-run double gave the Timber Rattlers three runs.  After another walk, Sublette was relieved by Cole Duensing.  Duensing gave up a run scoring single, but on a relay throw from CF José Ramos to 1B Imanol Vargas to 3B Alex De Jesús, the inning was over.

Duensing and Julian Smith completed the final three innings with only one single (off Smith), and three strikeouts each.

13 runs, 19 hits, 12 XBH.  This was an extraordinary game for the Loons offense.  Offensive stars:

River Ryan started and completed 3.2 scoreless innings.  He did allow 3 hits and 3 walks, with 5 strikeouts.  After a 2-out BB in the 4th, Ryan was relieved by Joan Valdez.  Valdez walked another, but got out of the inning.

In the 5th, Valdez gave up a single.  After a passed ball and another single, runners were on 1st and 3rd.  On an attempted steal of 2nd, catcher Nelson Quiroz threw out the runner.  However, a 6-3 ground out scored the first run of the game.  Valdez issued another free pass, and Carlos De Los Santos replaced him, and got out of the inning.

In the 8th, after striking out the leadoff hitter, Christian Suarez walked the next two batters. Madison Jeffrey came in to relieve Suarez.  After throwing a WP, he walked the third batter in the inning.  The run scored on a 4-3 ground out.

The pitchers on the night were wild.  They issued 10 walks and threw 4 wild pitches.

Down 1-0 in the 5th, Yunior Garcia led off with a triple.  After a strike out, Kenneth Betancourt singled home Garcia with the tying run.  But that was all the Quakes would get on this night.

Garcia had the only XBH and Quiroz was the only Quake batter to have 2 hits.