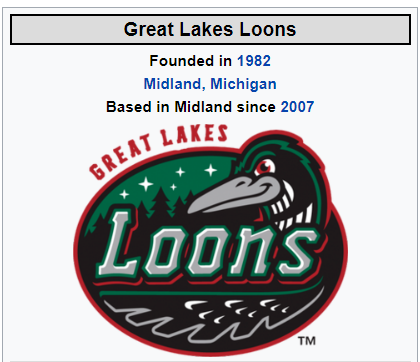 It has been said that the hardest jump in MiLB is from A+ to AA.  This is where many prospects leave only to become suspects.  Harold has more knowledge about the Loons over the years, as he has been following them for it seems like forever.  Thus, I have been following them more closely since 2016, but not nearly as close as Harold.

With respect to the three pitchers, there are certainly unanswered questions, but they all show promise.

Position Players (stats as of the end of May 1 games):

I am going to start with my favorite Loon – Gavin Stone (23).  Gavin was the 5th round pick in what could go down as one of the great drafts in LAD history.  It was small in number but huuuuuge in talent.  Bobby Miller, Landon Knack, and Clayton Beeter were the pitchers selected before Stone, but Stone has been just as terrific if not a little behind the others.

Gavin is becoming a pitcher more this year.  He is working on his secondary pitches and throwing them for strikes.  He still has a very fine fastball that gets good rise (and late) and can be unhittable.  His change is becoming a strike out pitch.  It is not in the class of Ryan Pepiot’s, but it is lethal.  I watched his slider on Thursday, and it good late break away from RH batters and dropped to the back foot of a LH batter.  His change looked like it was coming out of the same tunnel as his fastball, with considerable drop.

There is still a lot of reliever risk with Gavin, probably more due to his size than anything else.  But if he does continue to develop and master both of his secondary pitches, he could find himself at the back end of a rotation.  With Robbie Peto now on the Loons, can Gavin Stone find himself pushed to AA?

Scouting Report: Stone’s fastball sat 90-92 mph in college but ticked up to 93-97 in his pro debut. His fastball plays up with run and ride from his low release point to make it an above-average pitch that gets swings and misses in the strike zone. Stone uses his fastball heavily, but his slider and changeup are also viable weapons. His mid-80s slider flashes average and he began incorporating a firm, 86-89 mph changeup as last year progressed and flashed a plus offering with split action and late dive.

The Future: Stone is undersized and has some effort to his delivery, but he has above-average control and holds his velocity through his starts.

The Future: Stone largely projects to be a multi-inning reliever. He still has some physical projection left and could potentially blossom into a back-end starter.

Stone went from working with a 90-94 mph fastball as a college starter to averaging 94 mph and touching 98 in his first season as a pro, and his low release point creates induced vertical break that leaves hitters scuffling to get on top of his heater. He barely used a mid-80s changeup with some fade in college but now flashes a plus cambio with more velocity that drops off the table. He has scrapped his downer curveball to focus on a harder mid-80s slider/cutter and is working to add more sweep to help combat right-handers.

Stone aggressively attacks hitters with all three of his pitches and provides plenty of strikes. Though he’s less physical than a typical starter, his efficiency and twitchy athleticism may help him remain in that role. Los Angeles also could try to expedite him to the big leagues as a multi-inning reliever. 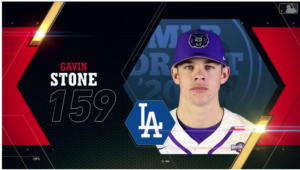 Unfortunately he signed to pitch for UCLA, but I forgive him for that.  After all, his decided to pitch for John Savage was a better option than for any other program out west.

Nick has a four-pitch mix that is advanced even if inconsistent.  His fastball has good vertical rise with good spin rates at the top of the zone.  He gets a lot of swing and miss with this pitch.  His slider is his primary secondary offering.  His curve has good spin and a late downward break that could become a plus plus pitch.  He also has a developing change, but does not throw it as much.

He has He has always been challenged with control, but if the LAD crack development team can fix the inconsistencies, Nick could be the steal of the draft.  It has also been reported that Nick is challenged in the emotional department.  If he can control his emotions and listen to his instructors, Nick could be special.  I believe he will be, and I could see him on the express elevator to the top.

Nastrini entered his junior year at UCLA considered a potential first-round pick, but he suffered the yips and walked 38 batters in 31.1 innings. The Dodgers still took a shot on his potent stuff and drafted him in the fourth round, signing him for an above-slot $497,500. Nastrini rediscovered his control as a pro and dominated in six starts at Low-A Rancho Cucamonga, then became the talk of instructional league with a sensational showing.

Scouting Report: Nastrini is a sturdy, physical righthander who flashes three plus or better pitches. His fastball sits 92-96 mph as a starter with high spin rates at the top of the strike zone. His short, tight 84-88 mph slider is a plus pitch that tunnels well off his fastball and his 78-82 mph, high-spin curveball with depth and sweep is another plus offering. His firm, 87-88 mph changeup with split action is developing. Nastrini’s control is the wild card. He is a good athlete with a polished delivery and threw strikes in the past, but he presently has well below-average control and has some mental hurdles to overcome.

The Future: The Dodgers are optimistic Nastrini will find his way back and become a mid-rotation starter. His first big test will come at High-A Great Lakes in 2022.

Nastrini opened 2021 as one of the best college pitching prospects on the West Coast and a potential second- or third rounder, but his control evaporated, and he pitched his way out of UCLA’s rotation after just five starts. The Dodgers scouted the local product enough to believe that his issues were correctable, and their confidence rose when he impressed in a pre-Draft workout for them and also struck out 24 in 13 scoreless innings with the summer Santa Barbara Foresters, whom he helped win the National Baseball Congress World Series in 2020. After they signed him in the fourth round for an over-slot $497,500, he dazzled with his stuff in his pro debut and during instructional league.

After sitting at 92-94 mph with his fastball at UCLA, Nastrini averaged 96 mph with outstanding carry and pitch characteristics in shorter stints as a pro. He also delivered high spin rates on both his upper-70s downer curveball and low-80s sweeping slider, which both show the potential to become plus offerings. He also can miss bats with a mid-80s changeup that dives at the plate, though he doesn’t use it very often.

Nastrini piled up 30 strikeouts in 13 innings in Low-A but he also issued seven walks. He never had pinpoint control at UCLA, but he has a repeatable delivery, and the Dodgers think they can help him with some minor tweaks such as tempo and catcher targeting. If he develops average control and command while maintaining the arsenal he showed in his debut, he could pitch in the front half of a big-league rotation.

His ceiling is at #2/#3 rotation pitcher.  Probably more #3 with a contender like LAD.  For a college 4th round pick, that is an accomplishment. 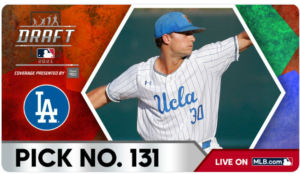 There are three fairly replaceable utility players with the Loons.  I am going to highlight the one I believe has the best chance of success, Eddys Leonard.

He is a clearly a utility player (primarily infield). For the season, Leonard has played 4 positions:

Track Record: The Dodgers signed Leonard for $200,000 when he was 17, taking a shot on his raw athleticism and fast bat speed. Leonard moved slowly through the Rookie levels and missed the 2020 season due to the coronavirus pandemic, but he finally played his first full season in 2021 and had the biggest breakout of any player in the Dodgers system. He hit .296 with 22 home runs and 81 RBIs as he moved from Low-A to High-A and finished second in OPS (.929) among all prospects in the organization.

Scouting Report: Few hitters in the Dodgers system can match Leonard’s bat speed. He has electric hands that get his barrel to the zone remarkably quickly, and the ball comes off fast and loud when he connects. Leonard has long crushed fastballs and began staying on righthanded sliders in 2021, which fueled his breakout. Leonard’s bat speed gives him above-average raw power, and he began elevating to his pull-side this year to access it in games. He stays balanced through his swing and has few pitch types or locations that cause him to struggle. Leonard is still searching for a home defensively. He’s an erratic infielder who is better at second base than shortstop and may have to move to center field. He’s a fringy to below-average defender at every spot with average speed and arm strength.

The Future: Leonard’s bat gives him a chance to be a multi-positional, everyday player. He’ll see Double-A in 2022.

Though they were limited to maximum $300,000 international bonuses in 2017-18 as a penalty for spending $96 million on that market two years earlier, the Dodgers still found several talented position prospects, including Andy Pages and Miguel Vargas (Cuba), Leonard (Dominican Republic) and Jorbit Vivas (Venezuela). Signed for $200,000, Leonard is the most versatile athlete among that group. He batted .297/.390/.539 with 22 homers as a 20-year-old getting his first extended taste of full-season ball in 2021, earning a spot on the 40-man roster.

Bigger and stronger than his listed 160 pounds, Leonard has quick hands and a whippy right-handed stroke that produce electric bat speed. While he can get a bit pull-conscious, he makes consistent hard contact and is showing at least 20-homer potential as he learns to drive the ball more consistently. He recognizes pitches well and manages the strike zone effectively.

Leonard possesses solid arm strength and similar speed that has translated more into defensive versatility than stolen bases at this point. He played primarily at shortstop last season but also had double-digit starts at second base, third base and center field. He needs to cut down on his youthful errors but projects as an average defender at shortstop, potentially plus at second and somewhere in between at third and center. 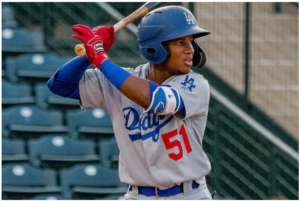 Joining Leonard and Vivas on the Loons is yet another utility infielder, Leonel Valera (22). Valera has played three positions:  2B (1 game), 3B (9 games), SS (13 games).  Offensively in 2022, he is in between Leonard and Vivas.

I think a fair question is, does the team really need three utility players all about the same age?

The Loons have a number of pitchers that were drafted in 2021, so their professional careers are just getting started:

They also had three undrafted free agents that have made their way to High A:

This team will be fun to watch once the offense picks up and perhaps get some help from RC.  Their pitching has been stellar.

For those who may not read the daily MiLB summaries, if nothing else please read the Rancho Cucamonga 1 hit shutout and the effort of soon to be 20 year old (Sunday) Jerming Rosario.

I read them. Thanks.

The Loons pitching is starting to develop into what we expected. That is, solid and deep.

Both Emmet Sheehan and Hyun-il Choi made one start in April and have been on the IL since April 10. Emmet Sheehan is a person of interest to me.

Gavin Srone was my choice for the MiLB Pitcher of the Year for the Dodgers in 2020.

I can’t say I have missed watching a NL Manager think. I admit the closeups of their faces when in deep thought was exciting. Glad to have the DH to replace those moments though.