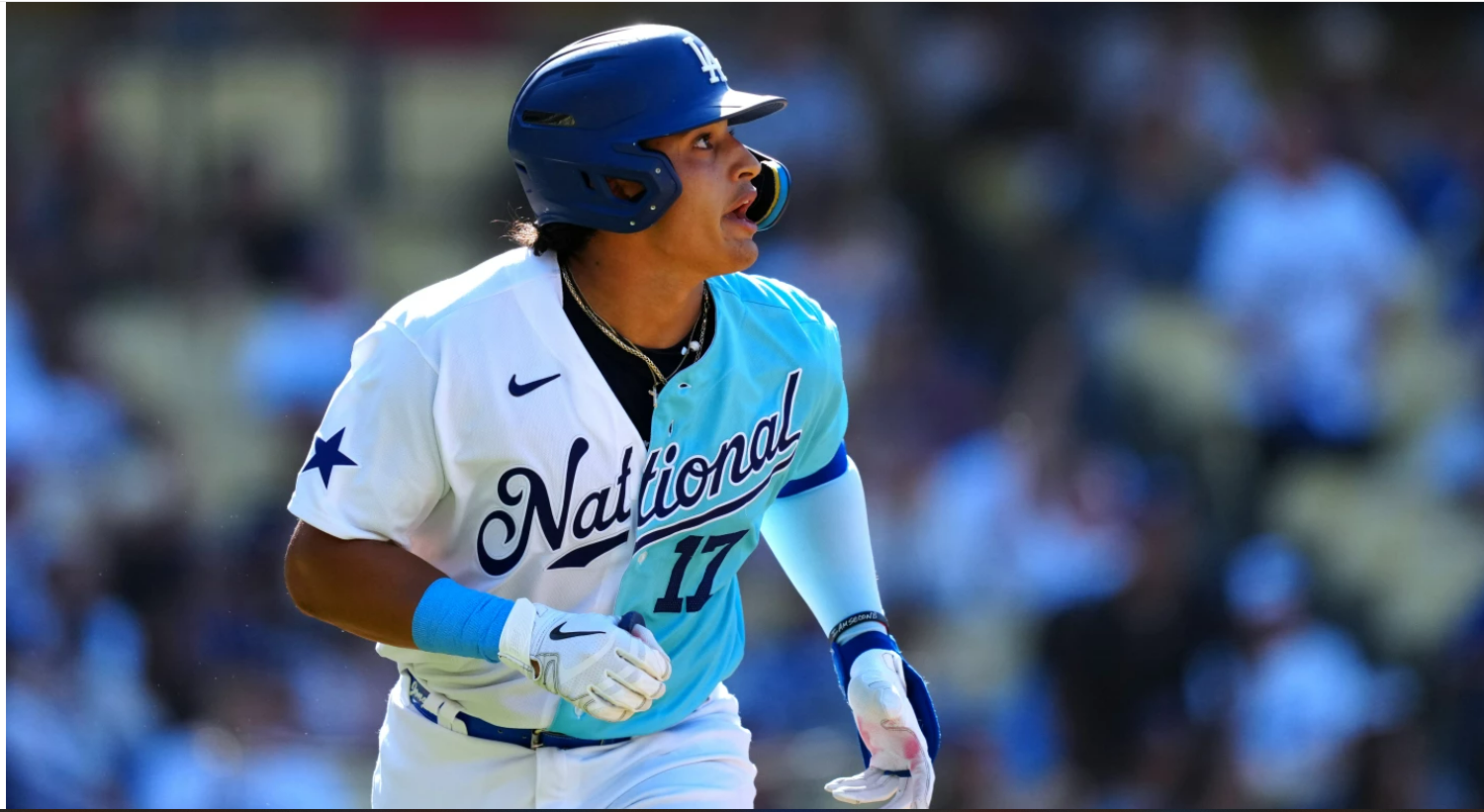 I was already reviewing the Baseball America revised Top 100 (post draft) when Bluto mentioned it in his post.  I have to thank him as it may have taken me longer to complete my analysis.  I have a tendency to review these lists, podcasts, chats, etc. to get ideas, but somehow do not get my posts documented.  Well I wanted to finish this one.  So here goes.

The Dodgers again prove that while they do not get top draft picks, they continue to outpace MLB with top 100 prospects. That is testament that the team acquires athletes and develops them to become ML players.  Not necessarily All Stars, but more often  than not serviceable ML players.   This year, they have 7 top 100, actually top 80.  They have a top ten prospect for first time since Gavin Lux (#4) in 2020. 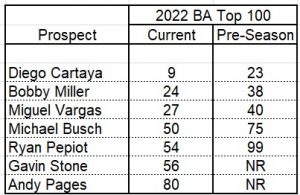 Below are the 30 MLB organizations, and the number of current top 100 prospects for each organization.

With the top 100, Baseball America also revised their top 30 in each organization.  These are usually fluid, but more than 25% of the players have changed since the pre-season list was reported.  Eight new players made their debut on BA’s Top 30 for the Dodgers, while eight players moved out of the list for various reasons.

No Change in Rankings:

I was also surprised to not see Jonny DeLuca’s name on the list.  Damon Keith is #30, and while I do like Keith, I do believe that DeLuca is a better prospect.  DeLuca is 22 months older but he is producing at AA, while Keith produced very well at A (Rancho), he just got promoted to A+ (Great Lakes).

I recognize that in the large picture, it makes very little difference as to who is #30 and who is #30+.  But I would like to know what criteria pushed Keith over DeLuca.

Not a surprise, but a big disappointment is that the Dodgers #1 draft pick in 2019, Kody Hoese, is no longer ranked in the top 30 prospects.  He lasted one season more than did Jeren Kendall, but that is two #1 picks (2017 and 2019) that dropped off the list very quickly.  That illustrates how unscientific the draft is.  2015(Walker Buehler), 2016 (Gavin Lux and Will Smith), and 2020 (Bobby Miller) are game changers.

Gavin Stone moved from 2nd tier prospect (#17), to top 10 (#6). He has dominated in such a way at AA, that he cannot be ignored.  He may not start at the MLB level, but he will pitch at that level, probably as soon as next year.

I was not surprised to see that Carlos Duran had moved up the list, but how high he moved was a surprise.  Duran has been hurt most of the year, and has been limited in his innings/pitch count, so the jump has to be due to his 13.32 K/9.  That swing and miss ability projects very well.  He is considered to have one of the very best sliders in MiLB.  He is basically a two pitch pitcher, which puts him squarely on the reliever train.  He has late inning high leverage capability.

Three pitchers that a lot of people were watching for the Dodgers in MiLB games:

Dustin May pitched a very efficient and productive 5.0 innings. He allowed a 3rd inning HR to Nick Solak. Over the 5.0 IP, he threw 68 pitches (45 strikes). 8 strikeouts vs 1 walk. We will find out if his rehab assignment is up or if he gets one more start. The Dodgers do not need him yet, but he will be needed soon enough.

Bobby Miller was breezing through 5.0 innings. He retired the first 10 batters he faced. Allowed a pair of singles in the 4th, but no runs. He struck out the side in the 5th. But then the roof caved in the 6th. He gave up a double, single, and HR to the first three batters he faced in the 6th for 3 runs. He did register 11 Ks.

Emmett Sheehan pitched another gem for Great Lakes. He went 5.0 innings allowing only an unearned run on 2 hits, 3 walks, and 9 strikeouts.

Good stuff. This is where I learn about the kids. I think Vargas is going to get a long look come spring. Pepiot is starting tonight against the Twins, With the new rules, he can only be optioned once more.

I didn’t hear it but apparently someone on the radio broadcast last night pointed out that the Dodgers have won 117 of their last 162 games. Those games obviously came over two different seasons so this is not the record for a complete season, however it’s still really amazing.

From what I can tell, only two other teams have ever won as many as 117 of 162 games (in both cases spread over multiple seasons). It was accomplished by the late ’90s Yankees and the early 2000s Mariners.

If the Dodgers keep up the current winning streak, at some point the 163rd previous game will have been a loss and they will then be able to claim the record of 118 wins in 162 games.

This is my place for learning about our prospects.

The question I’ve always had regarding prospects is how many can graduate to our roster each year? Our 26 man is loaded. It is every year.

Y’know Badger, I just think of prospects as assets. Not as potential players. And the goal is to maximize their value. Usually, given the roster constraints you mention, that through trade.

I agree Bluto. That was more or less what I was driving at. Develop a Top 10, trade most of them, do it again. Looking at our current Top 10, I see all of them with an ETA of ‘22 and’23. Three of them have had a cup of coffee. Half of them are 23 or older. Who is it out that group that cracks the starting lineup next year?

Miguel Vargas could start next year, depending as to what happens with JT and Muncy. If both are retained, Vargas will spend another year at OKC. Depending as to what happens with Anderson, Heaney and Kershaw, Pepiot could start in the rotation, or move to the bullpen. I do not see Michael Busch or Bobby Miller, or Andy Pages as starters next year. Gavin Stone and Landon Knack could find significant bullpen time next year at the MLB level. Cartaya is not nearly ready to start at the MLB level. I hope he starts at AA and moves to AAA during the year.

I had Rios and Turner splitting time at third this year. That didn’t work out. Is Rios still in the plan? Would love to see Vargas take the position as his for the next 5 years. Same with Pages. Miller and Pepiot? Well, their ETA is now. Who are the ‘23 free agents the Dodgers might be more interested in pursuing?

I expect Vargas to be with the team most all of next season, splitting his time between third base, left field and DH. He’s the only one I feel confident will break camp with the team. And I say that even if we bring back both JT and Max.

If I’m right about Gallo, we’ll need a lefty hitting outfielder who would start part of the time. That could be Outman or someone that AF gets in trade or signs in free agency.

Depending upon how Pepiot does for the rest of 2022, he may very well be part of the rotation or bullpen from opening day next year. I don’t expect any of the other prospect pitchers to be ready before mid-year at the very earliest.

Just my two cents, that with inflation is only worth a penny.

Last edited 3 months ago by Singing the Blue
0
Reply

Sounded good to me Jefe. I’ll give you a nickel.

Gallo hit 38 home runs last year. 22 in NY. Short porch. He’s only 28. I’m hoping the Dodgers coaches can help him get his confidence back. He’s a big dude, light tower power, good glove, could be fun having him in left.

If we fix him to the point he’s worth bringing back, I think someone else will give him a longer/bigger contract than we would. Farhan, for example.

Farhan will be going all out on Judge.

We need to go all out on Turner. Sure hope he likes LA.

Dustin May to get one more rehab start next Sunday, then be ready for a start against the Marlins the following weekend. Sunday would be normal rest, so this is a good thing.