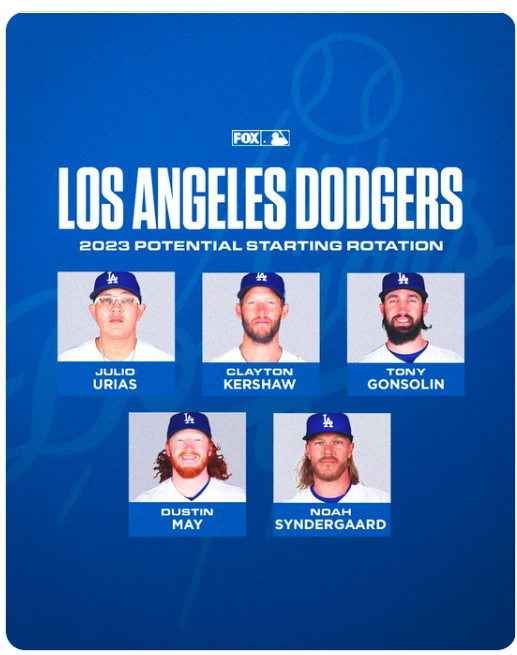 The 2022 season has come to an end, and we Dodgers fans are going to have a while before we forget the ending.  The 2023 season cannot come soon enough to help salve the wounds of 2022.  But as soon as ST begin, the sooner we can begin to look forward to 2023.

The first LAD spring training game will be Saturday, February 25 against Milwaukee.  We still do not know the final makeup of the projected position players for the LAD 26 man roster.  Will the team go all in with the youth movement, or will they make a trade to get a SS or CF?  I have remained consistent that I believe that AF/BG have gone all in on giving Gavin Lux his full runway to prove he is a ML SS (or not).

My biggest concern is not Lux, but Max Muncy (or Michael Busch) at 2B, and Miguel Vargas at 3B.  Like Lux, Vargas is going to get a full runway to prove he is more than a DH (or not).

CF (or LF) is still up in the air.  As projected, Trayce Thompson looks to be the CF and James Outman the LF, or vice versa.  Is CT3 going to be the platoon partner with Outman?  Is Jason Heyward going to be the platoon partner for Thompson.  Or Steven Duggar?  Or Bradley Zimmer?  Heyward is already working out a Dodger Stadium and has been issued a number. He figures to be one of the 26.

While the position players seem to be in flux, the pitching seems to be more set.

Sure it is easy to speculate that Clayton Kershaw, Tony Gonsolin, and Dustin May cannot make it through the season without visiting the IL. The odds are better than not that all three will visit the IL at least once.  If the Dodgers need another SP at the deadline, I do believe they will go out and get one, regardless of where they are in relation to the CBT threshold. I truly believe that AF/BG believe the offense will still score runs, so the key to the playoffs will be the strength of the pitching…principally starting pitching.

Let’s review the starting pitching for the other NL contenders:

I do not need to determine who the Padres depth is, as their #4 and #5 pitcher are nothing more than depth themselves.  Although, their top 3 are formidable.

Wade Miley is the depth, but their first four seem to be the toughest rotation the Dodgers would face.

The Dodgers had no problem with Manaea, and with Alex Cobb as the #2, I do not think the Giants rotation will be a huge deterrent.  I do think the Giants will be calling on LHSP prospect Kyle Harrison at some point in the season.  Jakob Junis and Sean Hjelle will also get calls.

With Mookie, Freddie, Will Smith, Gavin Lux, JDM, and a fully rehabbed Max Muncy (and CT3) would provide enough offense to make up for any potential shortfalls from Miguel Vargas, James Outman, and Trayce Thompson.  The Dodgers scored more runs than any other team in 2022 without any meaningful production from Cody Bellinger, Max Muncy, or CT3 (or Joey Gallo).  What if Trayce Thompson mirrors his 2022 production, and either Miguel Vargas and James Outman actually produce positive offense?

While the 2023 team is not even remotely built to reach 111 wins, I can certainly understand why BetMGM has made LAD co-favorites with NYM to win the NL Pennant.

I still believe there will be changes.  Will it be Bryan Reynolds, Dylan Carlson, Jarred Kelenic, Willie Adames, Amed Rosario, Royce Lewis, Jordan Westburg…?  There is still 2 ½ months before the beginning of the regular season and 6 weeks before Game 1 of the 2023 ST.

Great analysis Jeff. I think the Mets have two potential injury problems with Scherzer and Verlander, either one of those guys go down and they are in big trouble. Bobby Miller and Vargas have gotten some mention as possible RIY candidates. Should be an interesting spring. I do not think Muncy brings a lot of range to second base, but he does feel it is his best spot on the field. Brandon Belt signs a one-year deal with Toronto.

The interesting thing about the Mets is they haven’t done much to improve upon last years team. Granted they had a good year but nothing was done to improve the team. Hence, the Correa signing and that may get blown up soon.

He is signing a new deal with the Twins

I was just looking at the OKC preliminary roster. Some guys on there I never have heard of including two pitchers who are 6’6″ or taller.

In response to Bum’s post about our starter’s IP, I got May at 20 starts 100 innings. The rest of those guesses I’m ok with but would take the lower numbers. Urias is the only guy from whom I wouldn’t be surprised to see 180 innings.

I have no clue what competitors starting pitching will manage. My guess would be every organization knows pitchers today just don’t throw as many innings as they usta did. Most will likely use modified 6 man rotations.

It’s going to be a year like none other we’ve seen lately. Is it possible we could be sellers at the deadline? Of course it’s possible. Not likely, but, who knows how this will go.

The Dodgers’ anticipated starting 5 will be good to very good. They will need contributions from several of the kids. I also think that the bullpen looks solid. CF, LF, 2B, 3B and SS are all questions marks.

I do think that the Braves have very good starting pitching – much better than LA’s at this point. I think that you have perhaps underestimated them.

Man am I glad to see you here Rick.

I think you’re right about our starting pitching, but I would add the word potentially. 5 position question marks will make it interesting for me.

I believe I had it Mets, Padres, Braves, Dodgers. Correa going back to Minnesota will probably change that for me. A huge Mets addition just became a huge subtraction.

I am not a huge Charlie Morton fan. He is a workhorse that I would be more impressed with if he were a #5. But his regression at 39 seems imminent. His ERA, WHIP, and peripherals declined quite a bit from 2021. ERA + dropped from 130 to 94.

I used to be a huge Mike Soroka fan (and probably will be again at some point), but he has not pitched in two years due to injuries.

I need to see more than 1 year from Spencer Strider before I am convinced he is the real deal. His one playoff game was a disaster. It happens, so I do not draw a lot of conclusions on that one outing. But if you give all the accolades for his regular season, then you also have to include his dismal playoff experience.

Atlanta potentially is a powerful rotation, but the potential falls short of LAD potential. However, I do think they have the second best depth behind LAD.

I’m fine with the rotation. I would like to take a chance on Kelenic. He has been a top prospect that looked bad during call up with the Mariners. Now that Belt is off the board, maybe there is a trade scenario with Seattle who needs a lefty bat who can play 1st/DH.

Muncy for Kelenic with Friedman figuring out others that would be involved.

Welcome back to Minnesota, Carlos Correa.
Six years/$200 MM with vesting options that could take it to $270MM
No opt outs.
The deal is pending a physical.  ﻿ 😊 ﻿

Mr. Money Bags, Steve Cohen, was $42.5MM less in their 6 year guarantee than Minnesota. I think if Cohen truly wanted Correa, he would have bought him. It sure feels like buyer’s remorse as it did with SF.

This looks like it could open the door for a Royce Lewis trade. Brooks Lee will now be the next Alex Bregman and move to 3B, and will be a MLB player this year. Yes, I do believe that Brooks Lee is special, as I did Bregman.

Former LAD prospect, RHP A. J. Alexy was traded by Washington to Minnesota, after the Nationals DFA’d Alexy last week.

Matt Beaty has signed a MiLB contract with KC.

And the Red Sox season just got more interesting. Trevor Story just had what is called UCL Internal Brace procedure to repair his right (throwing) elbow. Per arthrax.com, “This technique is intended only to augment the primary repair/reconstruction by expanding the area of tissue approximation during the healing period and is not intended as a replacement for the native ligament.”

While Story is not expected back this season, the door remains open. Maybe Kike’ can play CF and SS. Boston was figuring to have a tough year before the procedure, now they really are going to need help just to stay ahead of Oakland in the AL.

It’s time for them to ease toward a rebuild. Taylor, Muncy, Vargas, Busch, and ? for Devers.

I know you are a Dodger fan. And every LAD fan would do this 110 times out of 100. ut put yourself in Boston’s executive suites. How does Taylor and Muncy part of a rebuild? Would you do that deal?

They are included to swap payroll cost with Muncy only a one year cost and allow Boston to not sink to the bottom this year and maybe next. Vargas and Busch help with the rebuild. Might they want another prospect? I can’t answer that.

Devers is most likely going to soon be a DH given his weak fielding.

Some highlights:
It ranked Dodgers #2 in farm systems (21% of vote)
#1 in drafting
Tied for #1 in int’l signings