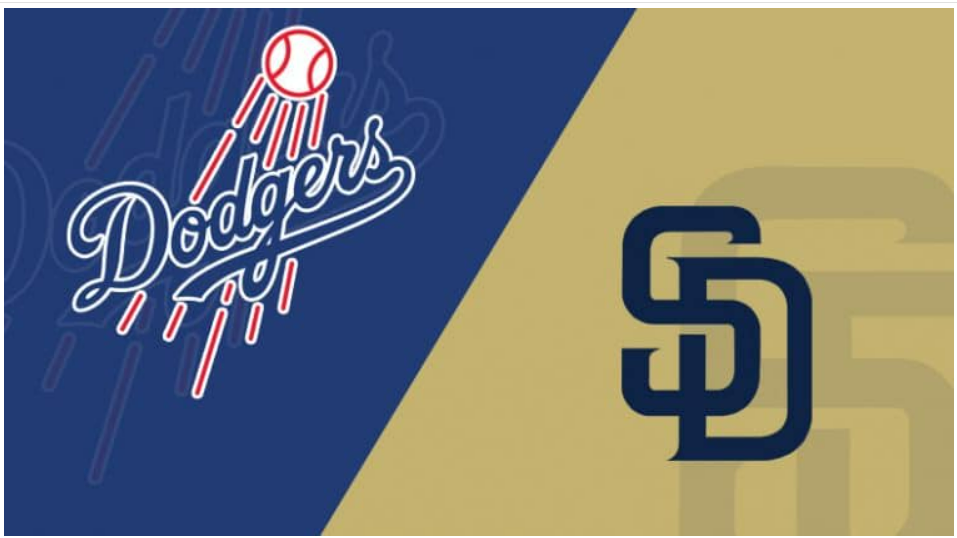 The start of the game was delayed by 35 minutes due to rain.  This was the 8th delay due to rain at Petco.  There were two other delays but those were due to bees.

Dustin May faced 4 batters in the 1st inning, with three going to 3 ball counts.  One became a walk, one was a strikeout, and one resulted in a ground out.  But May threw 22 pitches to get out of the inning.

The Padres second was more of the same with the San Diego hitters not chasing and driving the pitch count up.  After a Jake Cronenworth bunt single, May struck out Ha-Seong Kim.  On a 3-2 pitch to Wil Myers, Cronenworth took off and while the pitch was a strike, with Will Smith jumping out of his crouch to make a throw, plate umpire Jim Wolf, could not see it all the way and called the pitch a ball.  Smith made a fantastic throw that would have probably thrown out Cronenworth, instead it was a walk.

The Padres version of Cody Bellinger, Trent Grisham, followed and slugged a 3-run HR.  The next batter was Jorge Alfaro who was suspiciously HBP on the next pitch, and Alfaro took exception.  After 7 HBPs last weekend with these two teams, the umpires huddled to see if they should issue warnings, but decided not to issue warnings.

May got out of the inning, and the Dodgers bats took off a bit.  CT3 looped a single into left-center, and Cody Bellinger grounded to 1B Wil Myers who got Taylor at 2B, while Belli beat the throw to 1B.  Next batter was Mookie who was summarily HBP by Mike Clevinger on the 1st pitch.  Why hit CT3 or Belli when you can wait to hit Mookie.  The strategy did not work out as the Padres may have hoped.  Trea Turner singled to load the bases for Freddie.

There were a lot  of Freddie chants, and he delivered a long fly to CF scoring Belli and allowing Mookie to move to 3B.  Will Smith got his 81st RBI of the season with a Mookie scoring single to tie the score at 3-3.

In the LAD 4th, Trayce Thompson continued to excel against RHP and unloaded with his 9th HR of the season off Clevinger for a 4-3 LAD lead.  Clevinger knew he made a mistake as soon as he let go of the ball.

Meanwhile, Dustin May had a 9 pitch and 5 pitch inning in the 3rd and 4th innings to give him 60 for the game after 4.0 IP.  But the LAD defense failed again in the 5th.  With Juan Soto on 1B after a single, Manny Machado hit a single into RF that seemed to skip on Mookie that caromed off his ankle for a run scoring 2 base error.  Soto scored the tying run and Machado ended up on 3rd with 1 out.  May made a fielding error on the next batter on a ball hit right back to him.  However, May was able to navigate through the traffic to get out of the inning.  But he threw 22 pitches that inning, and 82 pitches for the game were enough.

After 5.0 innings it became a bullpen game.  For the first 4.0 innings, both teams relievers did their jobs.  A total of 3 hits in those 4 innings.  In the 10th, the Padres brought out Adrián Morejón to face Mookie, Trea, and Freddie with Bellinger at 2B. Morejon left Belli right there.

Heath Hembree was brought in to face Machado with Soto on 2nd.  He intentionally walked Machado to face Josh Bell, Jake Cronenworth, and Ha-Seong Kim.  He got Bell, but allowed a run scoring single to Cronenworth.  The Dodgers lost another close game.  They are now 4-7 in extra inning games. And 12-13 in 1-run games.

This was a case of two Dustin May’s.  In the 1st two innings, he tried to get the Padres to chase, but they would not offer at anything out of the zone, and made May work.  In the 3rd and 4th innings the Padres began to swing at the first pitch and he got 6 outs on 14 pitches.  In the 5th, he walked Soto, but that was the only batter that got to 3 balls.  He had 3 walks and 3 Ks.

Phil Bickford is the current version of Kenley Jansen who just cannot hold a runner on base.

IMHO, the Dodgers will wait for three of Brusdar Graterol, Yency Almonte, Tommy Kahnle, Victor Gonzalez and perhaps Danny Duffy to replace Heath Hembree, Phil Bickford, and Justin Bruihl.  I am not certain that David Price makes it back.

I am ready for the Gallo experiment to be over. May will be alright. This is basically Spring Training for him since coming off the IL.

Dodgers 6 for 35 with 12 Ks. Yes Gallo was 0fer but so was Betts, JT, Taylor and Bellinger. This was a team loss. It happens.

I keep hearing how good May’s stuff is, but in 4 outings the team has won only 1, his first game when he gave up 1 run and struck out 9 in 5 innings. Since then he’s given up 10 earned in 16 innings. He’s not right yet, but, still has a few starts to get there.

My frustration with Gallo is cumulative. Not just about last night.

Question is who replaces him? Taylor? He’s having his own issues. Bellinger? When was the last time he had a hit. Vargas? Since he’s been called up he hadn’t looked good.

I’m not the least bit concerned about Gallo. I just don’t care. He’s an experiment. It’s different with Bellinger and Taylor. I feel they are important pieces to this offense. We can have one hole in the lineup. We cannot have 3. And as bad as he’s been, Gallo has a 101 OPS+ with us. Taylor is 86, Bellinger is 71.

I am more concerned/bored with Bellinger’s head than I am with his swing/lack of contact. I don’t think giving him more playing time this season is going to do anything more than ingrain muscle memory that isn’t working.

A rain delayed game that wound up being played in rain didn’t help May’s performance.

I get the feeling Bellinger isn’t listening to coaches advice. I have no proof of that, other than he’s making no adjustments.

It wasn’t raining in May’s previous outing when he gave up 6 earned in 5 innings. But, Clevinger gave up 4 earned in 5 last night. Maybe pitching in a tropical storm is more difficult than I think it is.

In 1969 Curt Belfrey played for the Houston Astros. The manager, Harry Walker had him change his hitting approach. He hit .253 for the year. He was then traded to the Yankees in 1970. He claimed Walker had him hitting like a 200 pound woman. He went back to his old ways and was out of baseball after the 1972 season. I get the feeling Bellinger is thinking along the same lines.

Danielle Perkins weighs 200 pounds and she can hit pretty hard.

Bellinger isn’t hitting his weight. He’s apparently not willing to spread his legs, lower his hands and bend his knees. He’s a 1 WAR player. Pay him accordingly.

There is a player on the Cubs that I have been interested in and hope Friedman would explore a trade for should Trea sign elsewhere. Nico Hoerner is 25 and plays 2B and SS. I think Lux and Hoerner could be a long term middle infield for the Dodgers.

Hoerner is a former first rounder who attended Stanford. So that tells us he’s smart and highly thought of baseball-talent wise.

My guess is that he’s one of a very few current Cubs that management is planning to build their club around. In other words he wouldn’t come cheap.

Although he’s played mostly at short and second, he’s also spent a little time at third and in the outfield. What are you willing to send the Cubs in order to get him, Fred?

Hoerner enters his first year of arb eligibility next year. He’s a 4+ WAR player this year. Why would the Cubs consider trading him? Because we offer Miller and Vargas? Nope. Besides, we’ve got up the middle covered. Lux, Mookie and a new re-conditioned Bellinger. I heard Cody will be working out with The Rock this off season, all fast twitch development Cross Fit stuff, and will come back faster and stronger. I’m predicting 40 home runs and 30 stolen bases.

He’s often late. Why? I think it’s still in his shoulder. Get after it this winter and that bat won’t look so heavy.

I would have to know what the Cubs needed to be a much better team. If the Dodgers had those players I would offer them if it didn’t create holes in the Dodgers future/present.

Besides Hoerner, the top Cubs position players returning will be Ian Happ (OF), Nick Madrigal (2B), Seiya Suzuki (OF), and Alfonso Rivas (1B). Top returning pitchers would be Marcus Stroman, Keegan Thompson, and Justin Steele. With a capsular tear in his shoulder, how much more does Kyle Hendricks have left?

I am with STB and Badger. Hoerner is Chicago’s best player, except maybe Wilson Contreras who will not be a Cub in 2023. The Cubs have no pitching, no catching, and no farm, which makes why the Cubs did not trade Contreras or Happ at the deadline very strange. Their top 3 prospects are all OF, which is always questionable. Maybe the Dodgers could move Edwin Rios and a package to get Pete Crow-Armstrong. Crow-Armstrong who would be in a position to take over CF in 2024. Rios would be a threat to hit 40+ HRs annually with Wrigley as his home field.

However, I will say, trading Hoerner will bring back a boatload of talent, which the Cubs desperately need, and LAD can offer. Although extremely unlikely, I cannot say never on this one.

The Cubs have had a pretty mediocre history of developing pitching. We have lots of good minor league pitching.

We also have lots of good minor league catching so they could find an eventual replacement for Contreras.

Sept. 10: RHP Blake Treinen sidelined with lat soreness
Treinen, who has pitched in only five games this year because of shoulder pain, is a candidate to go back on the injured list after developing soreness in his right lat muscles, manager Dave Roberts said. Treinen last pitched on Sept. 5 and has made only two appearances after a 4 1/2-month stint on the IL.

I’d place a pretty big bet that this leads to surgery, so he’ll have wasted almost an entire season by not listening to El Attrache who told him to have it done months ago.

I believe the Dodgers have already opted into their option on Treinen for next year so they’ll have lost and paid him for two years since shoulder surgery (if it happens) will certainly ground him for all of 2023.

I think you may be right Jefe. Surgeon’s like to cut, but if your team dr recommends something, especially that team dr, I would think it wise to follow his advice. I wonder how much influence the team has in these situations.

I don’t think the team can ever insist a player have surgery. They can urge and plead, but they can’t force.

I suppose you’re right. Might as well see if he can recover enough to help in a few games. The Dodgers are going to need all the pitching help they can get.

Andre Jackson recalled to take the place of Treinen.