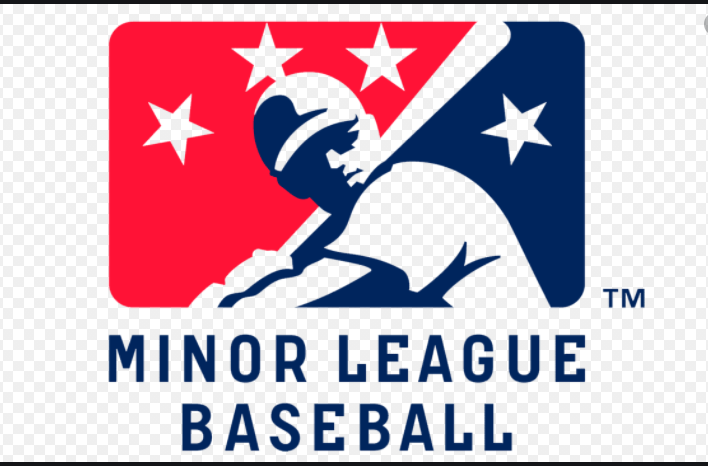 Sam Dykstra and Jonathan Mayo had a column on September 1st in which they projected each team’s top prospect for 2024.

They selected the Dodgers current No. 8 prospect in their top 30. This is their rationale for choosing outfielder José Ramos.

“Assuming current No. 1 prospect Diego Cartaya has graduated, Ramos appears to be the logical choice, an impressive climb for a guy who signed for just $30,000 back in 2018 and wasn’t even on the Dodgers’ Top 30 at the start of the season, was added at the beginning of August and now is in the Top 10. The power is legit, with 25 homers across two levels of A ball this year.” 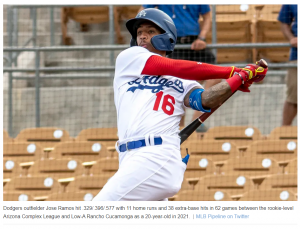 Just 5-foot-11 and 150 pounds when he signed as a 17-year-old, Ramos has added two inches and 50 pounds since then and now resembles fellow Dodgers outfield prospect Andy Pages with his physicality and tools. Both offer well above-average raw power from the right side of the plate and arm strength to match. Ramos has an efficient swing and some feel to hit, though he’ll need to tighten his strike zone and prove he can handle quality breaking balls at higher levels.  To date he has struck out 168 times during the current season compared to 57 walks.

Though Ramos has lost some speed as he has gotten stronger, he’s still an average runner with good instincts in the outfield. He spent most of his early career in center field but played solely in right field in Low-A, projecting as a solid defender on the corner. Base runners have not had much success testing his arm, as he recorded 20 assists in his first 112 outfield starts.

PLAYERS AND PITCHERS OF THE MONTH 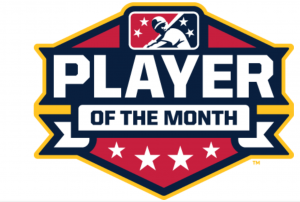 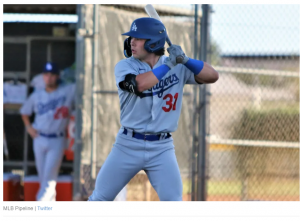 Rancho Cucamonga Quakes (Dodgers) right-hander Reinaldo De Paula is the California League Pitcher of the Month. He went 2-0 with two saves and a hold while finishing seven games for the Quakes. He did not allow a run and allowed just four hits in his nine appearances while striking out 14 in 14.0 innings. Opponents batted just .089 against him in August prior to his August 25 promotion to High-A Great Lakes. De Paula, 23, was signed by Los Angeles as an international free agent out of Santo Domingo, Dominican Republic, on May 29, 2017. 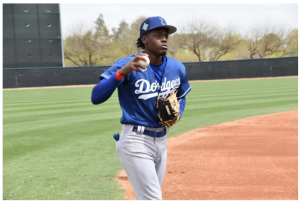 One of the most advanced young bats in the system, Doncon could be a plus hitter with 20 or more homers per season if he reaches his ceiling. He repeats his simple right-handed swing with ease, has a knack for barreling balls and possesses plenty of bat speed and projectable strength. Doncon already shows the ability to drive balls in the air, though he can get overly pull-conscious. – MLB Pipeline

He has fast bat speed, excellent natural timing in the batter’s box and consistently barrels fastballs. He has a flat swing plane that results in a lot of low line drives, but he has a chance to grow into average or better power as he gets stronger and fills out physically. – Baseball America

While the Dodgers believe Doncon has the actions and solid arm strength to possibly remain at shortstop, he’s an average runner who might lose some quickness as he matures physically. He’s still learning to play under control in the field and likely will wind up at second or third base, with more than enough offense to profile at either spot. Club officials praise his makeup as well. – MLB Pipeline

Doncon remains lean and is a capable shortstop with good actions and a plus arm. He is a tick below average runner who projects to slow down as he continues to fill out, so he may eventually have to move to third base. – Baseball America 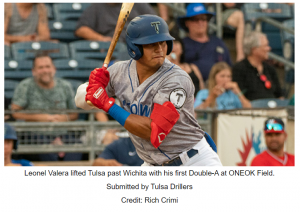 Leonel Valera has floated along almost unnoticed this year, and perhaps last year, but with the Drillers has had a resurgence. His revival has not been enough for him to claim a spot in the Dodgers Top 30 prospects list although it seems he has at least earned some consideration for that list.

“Extremely fast hands at the dish. Tall, fantastic build with the type of strength that shouldn’t be detrimental to his future at SS. Good plate discipline. Valera drops his head, uses his lower half to generate power with fluidity, along with the rest of his body. Takes what the pitcher gives and makes them pay for their mistakes.”

The right-handed hitting Valera was signed  as an international free agent on  July 22, 2015 out of Barinas, Venezuela.

His 2019 and 2021 seasons were spent with the Great Lakes Loons at the Class A and Class A+ levels respectively. He seemed to regress and fall off prospect lists in 2021 although he had gone up a level.

Two things stood out in his 2021 season. First, his power stroke emerged as he hit 16 home runs in the pitcher friendly Midwest league. Secondly, he stole 16 bases after having stolen 27 during the 2019 season.

His stock had not fallen with Dodgers farm director Will Rhymes who spoke about Valera last January.

“He’s a (player development) favorite because he’s about as tooled-up as they come,” Dodgers farm director Will Rhymes said of Valera during the season. “Incredibly gifted, kind of an A-Rod type body. Speed-power combo.”

“I’ve been a big fan of his for awhile. His upside is massive and he’s starting to put it together.”

“It’s interesting to think where he would go in the draft if he were coming out now,” Rhymes said. “The performance is kind of starting to line up with the potential.”

During the current season Valera had another slow start with the Loons. Over 42 games he hit .211 matching his weight at  210 pounds.

After being advanced to the Tulsa Drillers the potential that Will Rhymes spoke of began to surface again.

Among current Drillers, Valera now has the highest batting average having passed teammate Justin Yurchak who has an on-base streak of 22 consecutive games.

Valera, 23, has spent most of his time at shortstop but has also played at second base and third base.

Between the Loons and Drillers he has 32 stolen bases.

I hope Valera is able to start the 2023 season in AAA.

One of Cartaya or Rushing might be used in a trade this off-season. Normally I would want to keep the faster runner of the two but in this case it’s slow and slower.

I was perplexed when the Dodgers protected both Eddys Leonard and Jorbit Vivas and not Leonel Valera. I recognize that Valera is 16 months older than Leonard and 20 months older than Vivas. I believe both Leonard and Vivas can and will be ML players, but there was very little risk that either Leonard or Vivas would stick to a ML roster for the full year.

While in the DSL I started to push for Rayne Doncon as someone to watch far more than Wilman Diaz. Diaz is still just 18, and it is way too early to give up on him. But Doncon is only 6 weeks older than Diaz, and is proving to have far more tools for a middle infielder. Rayne is 18 and played in full season A Ball, and was not at all overwhelmed or lacking in confidence. He looks like someone the Dodgers may want to push. While it is almost certain that Doncon will start at Rancho, he gives every indication that he could be a June promotion to Great Lakes.

I depend on info here to evaluate our minor league players and to be honest I still look at a split that approaches .300/.400./.500., especially at AA and lower.

Valera’s numbers look good to me. He’s 23. He needs to do that at AAA

Ramos. Do it at AA

Rushing. Damm. Is he our best MiLB bat?

Eh. You could easily make the case that Rushing should have been dominating at Low-A. Much like Spencer Jones.

Great info as always Harold. Nice comeback beat down of the Pads yesterday and Blake Snell. Walk Machado, period. That’ll shut him up. USC manhandled Stanford and yay, the Notre Dame team lost to an unranked foe. Lots of top teams were upset yesterday. And Alabama almost gave one away to Texas. Truck packed for California trip. Talk to ya; all after I am out there.

Happy to see that Dalton Rushing has been promoted to Great Lakes. Their playoffs start Tuesday and RC’s season ends today, so he’ll have a chance to keep his season going. And what a season it’s been!

#Dodgers prospect Dalton Rushing was promoted to the Loons.https://t.co/TUYJgNjqTw pic.twitter.com/phFQGTMArl

Emmet Sheehan assigned to the Drillers and starting tonight.

Keegan Curtis to OKC from Tulsa.